by Michelle Lavery and Brian Owens

Hello Science Borealis readers! Summer is a great season for science â€“ and we’ve got a new editor on board and lots to get excited about. Shall we dive in?

Michelle Lavery is joining Brian on the General Science team from her cozy office at the University of New Brunswick. She’s in her second year of an MSc in biology at the Canadian Rivers Institute. Her soon-to-be-written thesis investigates over-winter egg survival and development in Atlantic salmon, and she’ll likely document every excruciating step of the writing process on Twitter. Over the course of the summer, watch for some serious procrastination on her Tumblr â€“ The Green Bin â€“ in the form of various ecology and climate change-related book reviews. 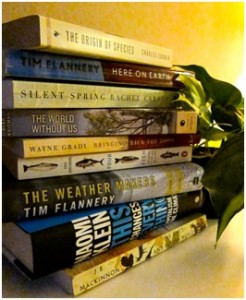 If, like Michelle, you’re in the writing game this summer, check out this recent post on editing student work at Talk Science To Me. Or, try Middle PhD Crisis for some moral support while your supervisor is away on holidays…

Speaking of books, we’ve loved reading John Dupuis’ Confessions of a Science Librarian over the past few months. He’s been posting regular “Reading Diary” book reviews on everything and anything science-related â€“ in both official languages! From novels about zombies and calculus to books that tackle what science is good for, he covers quite a few titles. There’s a new one every week or so and we’ll be taking his advice on some summer reads â€“ he is a librarian after all!

Our bloggers are also writing about how science can enrich our understanding of the places to which we travel. Helen Mason at Sci/Why encourages us to learn the Latin names of plants so that local monikers don’t cause confusion, as they did for her during a recent trip to Ireland. Meanwhile, in between his travels in Iceland, Stephen Heard at Scientist Sees Squirrel tackles our fear of sea monsters and gives us a Canadian perspective on geological time compared to (relatively) young Iceland.

Other bloggers seem to have been inspired by a particular summer movie release (you have three guesses â€“ go!). Our own Kimberly Moynahan (Science in Society subject editor) covered a smorgasbord of dino-themed posts a few weeks ago; however, we have a few more to add. From the new Wendiceratops horned dinosaur described by David Evans on the CSP blog, to feathered dinosaurs found in China over at Something About Science, Canadian bloggers seem to have the dino-scene covered. Charlotte Swanson at the Telus World of Science has even outlined the two best spots to start your fossil-hunting career in BC!

Finally, we’d like end on a slightly more serious note. With the federal election coming up this fall, we encourage you to get informed about the parties, their platforms, their candidates, and your MPs. This election has the potential to seriously impact the Canadian science we blog about here, so make sure you’re in the know. You can check out the Policy and Politics section here at Science Borealis, follow the latest from any of the major news outlets, or read up on each party at their respective websites.

Or you can even do what one of our most prolific bloggers has decided to do: get involved with the campaign. The writer of Speaking Up for Canadian Science has decided to take a break from blogging to work for one of his local candidates. While we’re sad to lose his steady stream of great Canadian science links, we wish him luck.

With that, we wish you happy and productive summers and look forward to interacting with you on Twitter and Facebook, where you can be sure to find the best bits of Canadian science!