Last month, researchers from across the country converged in Montreal for one of the biggest national ecology and evolution meetings ever held in Canada: Genomes to/aux Biomes 2014 (#G2B2014). Over 900 delegates from three academic societies (Canadian Society for Ecology and Evolution, Canadian Society of Zoologists, Society of Canadian Limnologists) participated in this scientific tour de force, where new discoveries, exciting ideas, and rising young stars were discussed and celebrated.

Unfortunately, this is Canada, and the enthusiasm and pride that scientists exude for their work is in stark contrast to the silence and antagonism displayed by the current federal government towards environmental research in this country. Although scientists are not renowned for their advocacy, the recent change in climate (pun intended) with respect to the reliance on and investment in science research in Canada over the past nine years has not gone unnoticed by researchers. 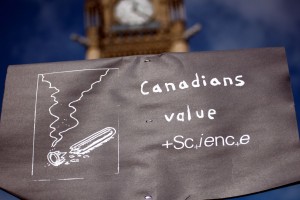 Canada’s so-called “War on Science” is not left-wing hyperbole dreamed up by a few dusty professors in tweed jackets resisting retirement by clinging to their beakers and test-tubes. Prominent scientists at the height of their careers are losing their jobs and research funding, both of which hinder the ability of scientists to provide impartial, objective scientific evidence to inform government decision-making (see also here).

It was in the heat of this political climate that Evidence for Democracy (E4D) emerged two years ago, after the 2012 Joint Evolution Meeting in Ottawa and the Death of Evidence march. E4D brings together scientists, experts, science communicators, and citizens united by a common ethos: that scientific evidence should be used to inform government decision-making. Rather than arguing for or against particular policy, E4D’s mission is to ensure that the best available science is used to craft public policy in an open, transparent, and accountable fashion.

In recent years, scientific evidence has taken a backseat to partisan ideology when it comes to developing government policy, much to the concern of scientists, Canadians, and the international community. Despite the high stakes, many scientists are worried about speaking out publicly or becoming politically involved. This fear is not irrational: government scientists from multiple departments have already faced several rounds of layoffs and are limited in their ability to speak to the press about their research or changes to communication policies.

Many scientists at Genomes to/aux Biomes have felt the impact of these restrictions on their research and work, and navigating this new research environment was a major conference topic of discussion. In addition to the multitude of sessions at Genomes to/aux Biomes devoted to scientific discoveries, there were sessions on government cuts to research funding, muzzling of scientists, and the crippling of scientist’s ability to monitor and study environmental change under the leadership of the current government.

There was also much discussion at Genomes to/aux Biomes about the role of scientists as advocates: do scientists have a moral obligation to be publicly political, or does speaking out compromise scientific objectivity and credibility? It can be a difficult question to answer, and the debate and discussion in the broader scientific community is ongoing (see here, here, and here).

To spark the ongoing discussion at Genomes to/aux Biomes, and to rally support for their mission, E4D presented a poster at the conference (now available online). The response was impressive! Students, postdocs and profs who had not been at the Death of Evidence rally or heard of E4D previously said that they were appalled and embarrassed by the state of science in Canada, and asked how to get involved. Three government scientists from Ottawa discreetly made donations but declined the buttons handed out in exchange. “We like the buttons,” they said “but we’re not sure we should wear them. Better not, just in case.” This closeted support was surprising, but further illustrates the far-reaching atmosphere of suppression under which current government scientists work.

In an even more surprising interaction, one former government scientist tearfully told us about her sacking during the most recent round of DFO cuts. Her shock and disbelief at the current state of affairs was palpable. Overall, our interactions during the poster session left little doubt that scientists are highly concerned about the future trajectory of science in Canada.

To follow up the poster session, E4D co-founder Prof. Scott Findlay from the University of Ottawa delivered a no-holds-barred public address outlining government cuts to science programs and environmental protection. His talk echoed Prof. Jeff Hutchings’ (Dalhousie University) urgent call to action in one of the conference’s plenary talks. There was rumbling in the hallways and on Twitter!

Canada’s once celebrated role as a world leader in environmental protection and proponent of evidence-based policy is melting away faster than the Arctic ice pack. E4D exists to help Canada rebuild that reputation and turn science policy away from the ideological path to an evidence-based model, regardless of which party forms our government. Scientists have a critical role to play in this: without their expertise and their research demonstrating the detrimental effects of current policy, there would be no foundation to this effort. The evidence clearly indicates that our environmental and science policy has taken a terrible turn in recent years, and if we’re to reverse that turn, we need to shore up our democracy with evidence-based policy as soon as possible. The question we challenge you with is: “what can we do about it?” 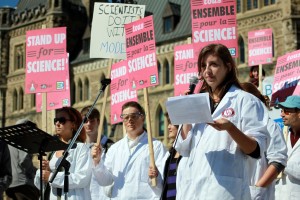 If you’re interested in E4D’s work, there are three ways to help. First, you can make a donation or buy one of their new t-shirts, which made their debut at Genomes to/aux Biomes. Second, if you are a Canadian scientist, you can sign up for their Network of Experts. The Network of Experts is an initiative to organize and mobilize the research community in public policy. Members of the network can help by alerting E4D to issues in their field that need attention, informing and peer-reviewing E4D’s campaigns, and signing up to be available as a media contact. Third, you can volunteer! E4D’s education, research, and advocacy work would be impossible without their huge team of volunteers from coast to coast to coast.