Undoubtedly, the government’s approval on June 17, 2014, of a pipeline to transport oil from Alberta to the coast of British Columbia stands as one of the most important policy decisions of the year. By examining the regulatory framework applied and the review process followed, it’s clear that the decision of the government to accept the work of the Joint Review Panel and to support the development of the Northern Gateway is based on multiple and even conflicting factors, reminding us that science is only one element of public policy. 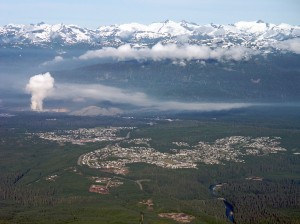 Aerial view of the town of Kitimat, the west coast port of the Northern Gateway pipeline project (Photo by Jonesy via Wikipedia)

The government’s error was perhaps in framing the matter as science-based (as a rare politician appearing on the news last June 17 did â€“ see CTV News Channel, and as stated in government news releases here and here), when so many other factors are implicated.

What is troubling in the context of Science Borealis: almost none of the links in this post are from science blogs, even though about 300 scientists signed a letter urging the government to reconsider the project. We think it’s high time that science bloggers added their voices to the conversation.

Government support for the Northern Gateway project boils down to a simple statement: it is in the public interest. Making this determination, however, was not so simple.

First, the energy sector is an engine of the Canadian economy that depends heavily on science, technology, engineering, and innovation. The construction and operation of pipelines is a clear example of this. It is also true that the energy sector is highly regulated, with regulatory oversight residing primarily with the National Energy Board (NEB).

This particular decision came from the Enbridge Northern Gateway Joint Review Panel (JRP), established by the NEB and the federal Minister of the Environment. The 3-member JRP was guided by an agreement which called for it to:

The environmental assessment complied with provisions of the Canadian Environmental Assessment Act, and was at least partly an exercise in risk assessment.

To appreciate the evidence considered by the JRP, it is worth searching through the public registry where all submission and procedural decisions made throughout the process are accessible. Most relevant is the two volume report that details of all the panel’s considerations, including the 209 conditions for approval.

Overall, the report makes it clear that it was not just the project’s environmental aspects that would be considered, but also economic aspects. In this light, the following conclusion is not surprising:

“[The JRP is] of the view that opening Pacific Basin markets is important to the Canadian economy and society. Societal and economic benefits can be expected from the project. We find that the environmental burdens associated with project construction and routine operation can generally be effectively mitigated.” (Report, Vol 1, p72)

Most people are aware of arguments against the Northern Gateway pipeline decision. These include the risk of hazardous spills and leaks, the impacts on the sensitive ecosystems of the Pacific coast, and opposition amongst the First Nations and the city of Kitimat (the intended port), and in British Columbia in general. One blog at Rabble.ca irreverently synthesizes those arguments. The fact that Kitimat citizens voted ‘no’ in a referendum on the project has also attracted the attention of many environment and policy bloggers. 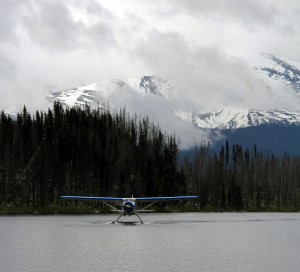 The Great Bear Rainforest, one of the regions through which the pipeline would travel (Photo by Self Design High; CC BY-NC-ND 2.0)

Public opposition to Northern Gateway is so strong that some newspaper columnists even speculated that it was the reason the decision had been announced so discreetly; in other words, it is possible the project will never see the light of day.

It’s clear that Northern Gateway was a public policy decision in which science played only a minor role and can certainly not be termed ‘science-based.’ Do you think science should have played more of a role in the decision making? How could it have been better incorporated? What do you have to say on the subject?

We invite science bloggers to examine the science and science policy-based implications of this project approval in their posts, to generate more discussion around the role of science in public policy â€“ especially large resource projects with such high political and environmental stakes as this one.