Is your cat a catnip user? Should you be worried about Princess Fuzzbottom’s drug use?

What is catnip? It’s the common name of Nepeta cataria, a plant in the mint family that grows wild in many regions, including Canada. Domestic cats generally encounter dried catnip as a stuffing in cat toys, or as an attractant added to scratching posts. It can sometimes be mixed with other scents such as lavender to provide further scent enrichment.

When cats encounter dried or fresh catnip, their reactions typically fall into one of three categories: rubbing and rolling; hunting, feeding and aggressiveness; or playfulness. Specifically, cats may react by sniffing and licking or rubbing their cheeks and chins on the catnip, drooling, or bunny-kicking.

I’ve always questioned the veracity of this, so I asked some experts. Zazie Todd currently lives in British Columbia and is the author of the Science Borealis Network Blog Companion Animal Psychology, as well as Fellow Creatures for Psychology Today. Laura McNally is a veterinary technician at the Martin Veterinary Hospital in Toronto, with over 10 years of experience working in veterinary clinics.

Is there a human drug analog to catnip?

Zazie: Catnip seems to induce a feeling of euphoria in cats. The active compound, nepetalactone, binds to receptors in the cat’s nose, and the response in the brain involves the olfactory bulb, the amygdala and the hypothalamus. It’s as if the cat is responding to a pheromone (chemical signal that has meaning to cats), even though the vomeronasal organ (which detects pheromones) is not involved. Because humans don’t use pheromones, it’s hard to think of an exact human equivalent. It seems that nepetalactone affects some opioid receptors in the cat’s brain, although we still don’t fully understand the catnip response.

Laura: Not really, the mechanism of action is based directly upon the cat’s olfactory receptors. The catnip in no way enters the cat’s blood stream, unlike human street drugs. A human analog that causes similar effects [as catnip on cats], as in a comparable high, would be LSD or marijuana. But without the length of time or possible nasty side effects.

[Ainslie: So maybe my brother and the police officer were on to something!] 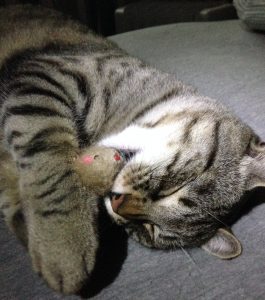 Would cats react or experience catnip differently depending on the route of administration? For example, smelling the dried herb versus eating a food or drinking a liquid infused with the oil.

Z: The potency and freshness of dried catnip varies, so it may contain more or less of the volatile chemicals. The catnip response is only olfactory; scientists have tried giving cats oral catnip and it has no effect.

L: Cats chewing on catnip are not ingesting the “drug,” but excreting the nepetalactone into the air, which is then absorbed through their olfactory epithelium and binds to the receptors.

Can catnip be harmful to cats? Does it have addictive qualities or does it cause a post-intoxication “hangover”?

Z: Catnip is not addictive, and it is not harmful to cats. After responding to catnip, there is a short period of about half-an-hour during which the cat is not sensitive to it.

L: Catnip is not considered to be harmful and does not pose the risk of causing a true overdose effect. The effects only last from 5 to 15 minutes, and cats cannot get this “high” again for at least another hour. Toxicity is possible, in the sense of getting sick. Typical side effects are vomiting or diarrhea. There is no concern of lasting central nervous system (CNS) symptoms due to its short-lasting effects. No treatment is warranted, and most cats are sensible enough to stop once they have had enough. 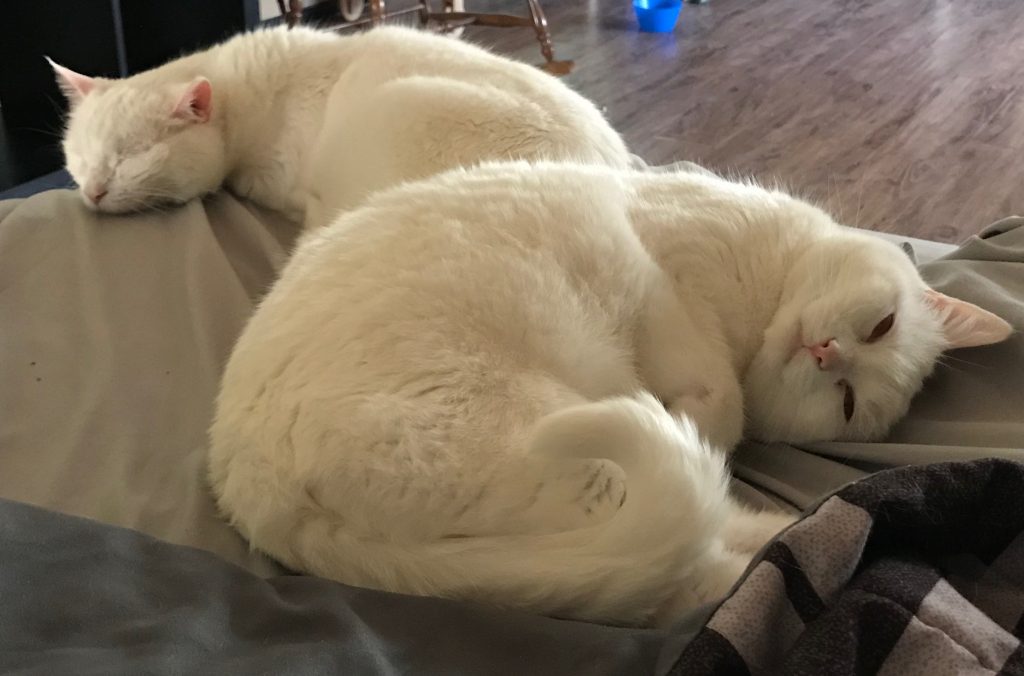 Eos and Selene taking a well-deserved nap after defeating all the catnip toys. Photo by Laura McNally; used with permission.

Do we know why individual cats react differently to catnip? Some cats react with indifference while others become frantic or violent. Is this influenced by sex, breed, or other factors?

Z: About two-thirds of cats respond to catnip, and this is inherited as an autosomal dominant trait. Young kittens don’t respond to catnip; if they are going to have the response, it will develop by the time they become sexually mature at around six months of age.

L: Catnip [response] is a genetic trait that 15 per cent of the feline population does not have. Kittens under the age of eight weeks (olfactory systems develop until three months of age) and some senior cats are not susceptible to the effects of catnip. 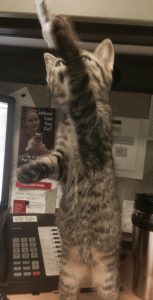 Given that cats react to the volatile chemicals in catnip as if they were pheromones, would it interfere with mating behaviours or instincts in feral or non-neutered cats?

Z: The way cats respond to catnip (rolling around, etc.) looks like the way female cats behave when they are in heat. However, both male and female cats can respond to catnip, and cats that are neutered/spayed can respond, as well as cats that are intact. So even though it looks to our eyes like a mating behaviour, it’s not. It’s actually a mystery why cats have the catnip response (and not just domestic cats, but some other members of the cat family too, like bobcats).

Are there catnip alternatives if your cat reacts extremely (or not at all) to catnip, which could be used to encourage enriched play?

Z: Even if cats don’t respond to catnip, there are some other plants they may have a similar response to, including silver vine (matatabi), valerian, honeysuckle, and the root of Kiwi vines.

So there you have it. Catnip isn’t really like any human drug. While we don’t fully understand a cat’s response to it, catnip is a safe way to introduce enrichment and play into your domestic cat’s life.

3 thoughts on “If you don’t talk to your cat about catnip, who will?”