Globally, 400 metric tonnes of plastic are produced annually: 40% is single-use, resulting in significant waste. Every year, 29,000 tonnes of plastic are released into Canada’s environment, causing serious environmental problems—the accumulation of plastic waste in land and water ecosystems, leakage of harmful microbes into the environment, and threats to plants and animals. Many marine animals, including whales, dolphins, seals, and sea lions, are killed each year by waste plastic, either by ingesting it or becoming entangled in fishing gear. Another 2.8 million tonnes of plastic goes into landfills in Canada. This can cause the release of toxic chemicals into the air and soil leaving a long-term hazard for future generations.

Current plastic waste management approaches focus on applying physical, thermal, and chemical treatments to plastic polymers. However, these approaches have significant drawbacks—they result in environmental pollution and the loss of valuable materials and resources. New methods of recycling plastic are emerging to supplement current plastic management systems with the aim of achieving a zero-plastic waste future. To achieve this goal, plastics are being formulated using recycled or biodegradable components that enable the transition from linear to circular use models.

In a linear economy (left) items are produced, used and then thrown away creating waste and an endless need for new raw materials. In a circulary economy (right) resources are used and reused minimzing waste and conserving resources. Image by Catherine Weetman, CC 3.0.

Recycling plastics by breaking them down with enzymes is a promising approach to the sustainable reuse of plastics and plastic building blocks. Dr. Laurence Yang, a professor of chemical engineering at Queen’s University, Canada, and his team are working on a commercially feasible method that uses genomics technologies to recover value from waste plastics. Genomic technologies are technologies used to control and analyze information in the genome. These technologies are used to identify the genes responsible for producing plastic-degrading enzymes in suitable microorganisms.

Plastic-degrading enzymes can be produced by microorganisms such as bacteria and fungi. Several bacteria with plastic-degrading abilities have been isolated from floating debris, garbage soil, landfills, and polluted water. These include Pseudomonas, Bacillus, Staphylococcus, Streptomyces, among others. Filamentous fungi isolated from landfill soil can degrade plastics such as polyethylene. These include Fusarium oxysporum, Fusarium falciforme, and Purpureocillum lilacinum.

Dr. Yang’s multidisciplinary team is exploring a microbial platform for breaking down plastics into recyclable components or valuable fine chemicals. This project is affiliated with the Contaminants of Emerging Concern – Research Excellence Network (CEC-REN) at Queen’s University, an interdisciplinary research and innovation initiative.  Yang and his team use genomic technologies such as metagenomics, metatranscriptomics, whole-genome sequencing, and functional genomics to find the genes that code for plastic-degrading enzymes. They are also investigating the impact of these newly-developed plastic biotechnologies on the environment, economy, and society as a whole. This project is one of eight large-scale applied research projects supported by Ontario Genomics that aims to use genomics research and technology to conserve natural resources, protect the environment, and ensure long-term sustainability. 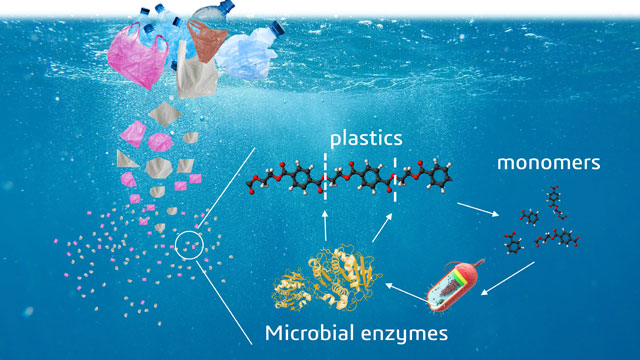 Microbes and their plastic degrading enzymes break down the large plastic polymers into small units (monomers). Image from Yi Zhang for Technology Networks (Fair Dealing use).

Enzymes are the future of plastic recycling

Creating a circular economy for plastics has the potential to transform the manufacture and use of plastics worldwide. Using enzymes to recycle plastic does not require extreme conditions for plastic breakdown and manufacturing large quantities of the enzymes is relatively inexpensive. The monomers produced by this process can be used as raw material for new polymers or recycled into new chemicals. Enzyme degradation could result in redirecting 90% of Canada’s waste plastic from landfills to recycling, saving $500 million per year in expenses, decreasing CO2 equivalents in greenhouse gas emissions by 1.8 million tonnes, and generating 42,000 jobs in new industries.

Recycling plastics with enzymes is a sustainable approach to a global problem—a problem we need to solve now. Recent research shows that breaking down waste plastics with microorganism produced enzymes is possible. All we need to do now is make it a commercial reality.