Theoretical physics is often criticized for its lack of observable predictions. However, Canada is at the forefront of research on fascinating objects that exist in the borderlands between theoretical and observational physics: cosmic strings. These theorized objects may provide answers to some of the biggest questions in physics today.

The burning question: are cosmic strings the same as string theory?

Despite the similarity in the names, cosmic strings and string theory are mostly unrelated concepts. String theories are theories that describe subatomic particles, the building blocks of the world, as tiny vibrating strings of energy. Cosmic strings, on the other hand, are not theories, but objects that exist on astronomical scales, not subatomic scales. They crop up in various cosmological theories, some of which (though not most) fall under the umbrella of string theory. But even if you were hoping for a discussion on string theory, don’t despair! Cosmic strings are also well worth your time.

What are cosmic strings and where did they come from?

In the first fractions of a second after the Big Bang, the universe was a tumultuous place. It started off extremely hot and dense, and many interesting processes occurred as it cooled and expanded. In particular, the universe underwent phase transitions. You may recognise the term phase transition from an early science class when you learned about water freezing into ice. While the context of the early universe is different, the fundamental idea is not. Similar to how a change in temperature turns water into ice, the decrease in the universe’s temperature and pressure caused it to experience phase changes in its first moments of existence. If we take this analogy a step further, we can imagine a similar situation to the conditions under which cosmic strings were created. When water is freezing, the molecules are forming into an orderly crystal. However, the crystal’s structure is not always perfect. Imperfections can be introduced by various things such as impurities, physical disturbances, or a particularly fast cooling process. Physicists think the same is true for the universe: when it went through a phase transition, the process wasn’t entirely flawless and some imperfections in the fabric of spacetime were created. We call these imperfections topological defects. Cosmic strings are one example of these defects. 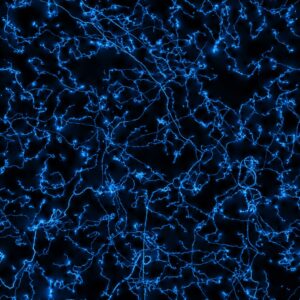 This is the point at which the water to ice analogy breaks down. In fact, there is no perfect parallel that equates cosmic strings to defects in an ice crystal. Instead, you can imagine cosmic strings as long, tubular (one might even say “stringy”) defects in spacetime where energy was trapped during the phase transition of the universe. Cosmic strings are also unlike defects in an ice crystal because they are not trapped at a singular location. Not only can they move around in space, but they do so close to the speed of light! When cosmic strings move around space, they leave a wake behind them. This is similar to the effect that a boat creates on a lake, except that it’s made of energy instead of water. Cosmic string wakes are of great interest to physicists since they are the most easily observed real-world effect of these theoretical objects. Finding ways of observing cosmic strings, or their direct effects, is particularly important since physicists have yet to confirm cosmic strings’ existence through experimental or observational data.

The importance of cosmic strings

A theoretical physicist would probably be content stating that fundamental science has intrinsic value and that discoveries made while pursuing knowledge for its own sake often lead to useful applications down the road. However, cosmic strings have more to offer.  The wakes of cosmic strings provide measurable, observable effects on the universe that can be predicted and looked for using existing observational astrophysics techniques.

Furthermore, cosmic strings appear in many so-called Grand Unified Theories (GUTs). GUTs – you may have heard the term Theory of Everything – are theories that bring together all the fundamental forces in physics and are highly sought-after by physicists because they explain the universe in a complete and consistent way. Cosmic strings provide an observational real-world path to potentially determining which of these GUT candidates are worth pursuing and which ones are destined for the recycling bin.

Canada has positioned itself as a world leader in cosmic string research. From the Perimeter Institute – Canada’s preeminent institute for theoretical physics – to physics departments coast to coast to coast, Canadian physicists are involved in both theoretical and observational cosmic string research. In 2021, the Canadian Association of Physicists awarded its prestigious Medal for Lifetime Achievement in Physics to Dr. Robert Brandenberger of McGill University in large part for his theoretical work on cosmic strings. 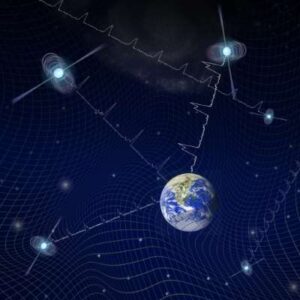 On the observational side, we need look no further than the NANOGrav Physics Frontier Center, a Canadian-American gravitational wave observational astrophysics collaboration. Three Canadian institutions, McGill University, The Canadian Institute for Theoretical Astrophysics and The University of British Columbia, are key players in this collaboration. Many researchers believe that some of their recent data can be well explained by the existence of cosmic strings and could maybe even prove their existence once and for all. If true, the existence of cosmic strings would provide uniquely strong support of a GUT candidate, thereby revolutionizing physics and completely changing our understanding of how the universe works.

Cosmic strings hold an important place in theoretical physics because of the path they provide towards the establishing of a GUT. While they have so far remained entirely in the domain of theory, recent developments like the data from the NANOGrav Center may soon change that. This collaboration is another facet of Canada’s strong tradition of leadership in cosmic string research. We look forward to seeing what role cosmic strings will play in the development of future GUT research.