Did you happen to find yourself in the deep woods of Canada sometime over the last few weeks? It wouldn’t be hard to do, as Canada has 10% of the world’s forests, and 35-40% of our landmass is covered in woodlands. Forests are central to the environment: they play a key role in the global carbon cycle and provide habitat for many flora and fauna. In Canada, about 70% of Aboriginal communities are located in forested areas, over 200,000 people are employed in the forest industry, and the water supplied for more than 65% of the population comes from water sources that originate in forested headwaters. Surprisingly, more than 90% of Canada’s forests remain publicly owned by government and aboriginal peoples, with the rest on private land. 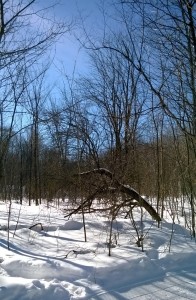 It may not be winter yet, but it’s just around the corner! Gatineau Park in winter (Photo: S. Ray-Chauduri)

The third week of September marked the 47th annual National Forest Week in Canada. Intended to help Canadians learn more about forests and our forest heritage, it originally started in the 1920s as Forest Fire Prevention week. Highlights from this year’s events included an announcement by The Nature Conservancy of Canada (NCC) regarding the conservation of five forest properties across Canada, from Alberta to New Brunswick. NCC also hosted a Twitter chat about the importance of forests to everyday Canadians â€“ and the comments from people across the country reveal our nationwide love of forests!

Unfortunately, National Forest Week occurred during the same month that a new study from Global Forest Watch (a partnership between NGOs and the University of Maryland) singled out Canada for having one of the worst rates of deforestation in the world. Using a big data approach that relies heavily on satellite imagery to identify intact forest landscapes (IFLs: undisturbed forest areas >500 km2), they reported an 8% decline in global IFL since 2000, with 21.4% of that occurring in Canada, followed by Russia (~20%), and Brazil (~14%).The analysis showed that Canadian forest loss was greatest in northern portions of Ontario, Quebec, and the Prairie provinces, as well as in interior BC. The good news was the evidence of reforestation in the Maritimes.

One of the biggest problems in the reporting around the GFW dataset was media use of the word ‘deforestation.’ Deforestation refers to the permanent removal of forest cover to make way for other land uses. This would apply to areas such as northern Alberta, where oil sands exploration requires permanent boreal forest removal on a massive scale. However, deforestation does not apply to areas that are burned and regenerating, or harvested and to be replanted, as this essentially represents temporary forest loss. This terminology problem could be solved if a second drawback to the study is addressed: namely, the lack of metadata. Metadata includes information on the causes of observed forest loss, including whether it was natural or human-caused, and how it might change (or not) over the long term. Merely identifying forest area as ‘lost’ without providing context for how it was lost can be problematic.

For example, following the extreme 2014 wildfire season in the Northwest Territories, we’d expect the GFW dataset to identify over 3 million hectares of forest loss. In the absence of metadata explaining what caused this loss, it could erroneously be classified as deforestation, even though burned forests regenerate over a given timeframe. The GFW group acknowledges these limitations and says that they’re reaching out to local people who know the forest to fill in the information gaps. This is the perfect project for the citizen scientist: when you have a chance, check out the forest in your area on their website, and send them your information on what’s happening there so that they can improve their analyses. 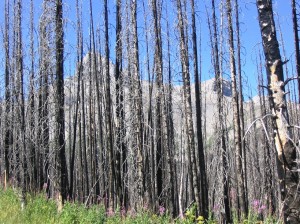 In response to the GFW report, Natural Resources Canada (NRCan) posted a summary on deforestation that included an annual deforestation rate for 2010 of <0.02%, and a claim that deforestation rates have been decreasing over the past 20 years. Where deforestation does occur, it’s attributed mainly to agriculture (41%), followed by resource development/transportation (37%), urban expansion and recreation (12%), and forestry and hydroelectricity (9%). Data from NRCan’s State of Canada’s Forests illustrate the many other ways we lose forest cover in Canada, including 4.2 million ha burned by wildfire, 8.6 million ha affected by insects, and 0.6 million ha harvested.

It appears that direct comparison of forest data between studies can be problematic without a common framework for classification and definition of forest lands, and a set methodology for calculating forest loss. For example, how long after forest removal must trees regenerate or be replaced before being classified as deforestation? Is it best to calculate forest loss as a percentage of the total forested landmass or as an absolute area-based value? While understanding the drivers of forest loss is necessary for good forest management, it requires long term monitoring with adequate metadata. Additionally, given the complexity of forest ecosystems, calculating the effects of forest loss may require an analysis that moves beyond numbers and incorporates both environmental values and socioeconomic impacts on people.

Even though deforestation seems to account for a relatively small proportion of forest loss in Canada, the major contributions of forest ecosystems to the carbon and water cycles, and their cultural contributions to our health, well-being, and recreation, requires that we do everything we can to reduce deforestation rates.

So don’t forget to take some time each year during National Forest Week to recognize the diversity and importance of our forested landscapes, and celebrate their continued health across the country.

3 thoughts on “National Forest Week and the misconception of deforestation”