In April of this year I happily quit my job, only to take a new one just three weeks later that had me working at exactly the same place. Confused? Allow me to explain.

After 44 years, Fisheries and Oceans Canada (DFO) announced the end of their operations at the Experimental Lakes Area (ELA) on May 17th, 2012. The ELA is a world-class, unique Canadian scientific research facility, where whole lake-experiments are carried out regularly. Made up of 58 freshwater lakes in northwestern Ontario, this outdoor laboratory has been producing whole-ecosystem research on environmental problems for the past five decades.

Work out of the ELA has been unparalleled in guiding environmental policy around the globe. Research in the 1960’s and 70’s on nutrients provided unequivocal evidence for the role of phosphorus in causing algal blooms, and resulted in phosphate reduction and phosphorus control strategies around the world. Research on acid rain proved that the catastrophic effects of acidification on boreal ecosystems occurred at thresholds much lower than laboratory experiments had suggested. Later work on synthetic estrogen and atmospheric mercury deposition has recently been cited in policy meetings at national and international levels.

Not surprisingly, I was pretty excited when I was hired in 2010 to work at the ELA as a fisheries research scientist. From the perspective of a budding fisheries ecologist hot off a postdoc, this was a dream job: working at the best-known freshwater research facility on the planet. Better yet, I was one of two scientists hired during what was described as a period of renewal and investment in the future of both the ELA and freshwater science in DFO. 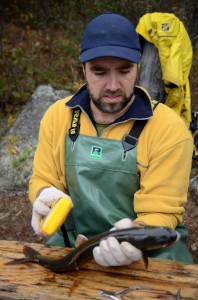 Reading tag numbers of spawning lake trout at lake 224, Experimental Lakes Area, to estimate the population size in the lake, and changes in individual fish over time. (Photo: M. Rennie)

So perhaps equally unsurprisingly, I was dumbfounded when, just two years later, the government that had hired me announced that it would end operations at the facility for good, and would be seeking a new operator. Without a new operator, the place would be closed, razed to the ground, and trees planted in order to return the site to its natural state (as per the original agreements signed with the Government of Ontario).

Thanks to the tireless and herculean efforts of many, many, many people working from May 2012 until today, the ELA has secured that new operator. This April, it was announced that the ELA would be operated and managed by the International Institute for Sustainable Development (IISD), headquartered in Winnipeg. A phoenix from the ashes, the ELA now operates as its own corporate entity under IISD (IISD-ELA Inc.), and in just five short months has managed to hire on a complement of staff and research scientists, implement a field season to avoid major gaps in the long-term dataset, continue ongoing experiments on nutrient addition and water diversion, initiate a new whole-lake experiment on nanosilver additions, make badly-needed upgrades to the facility, and, in just a few days, will launch a new website. Funding commitments from the Governments of Ontario and Manitoba and, increasingly, private donations, have been instrumental in making this new relationship possible.

So that’s how, in April of this year, I received a letter of offer of employment from the IISD to work at the ELA, enabling me to quit my job as a federal public servant (one who had, until only two months previous, worked at the ELA). I’ve never looked back, and can honestly say the future of the ELA now is far brighter than I ever envisioned in its previous incarnation.

So many fantastic opportunities now exist at IISD-ELA that were not possible under the federal government’s management. Free of departmental mandates, we’re now able to host and conduct field courses and field schools, and have even run a few during our first five months as a new entity. Though our strength and our background is in experimental lake studies, research at the facility is no longer strictly confined to water-based investigations. We can now include experimental manipulations on the surrounding land-based watersheds and the ecosystems they support.

We’ve hosted many facility tours this summer to show researchers the opportunity for future work at the ELA, taking advantage of our existing strengths and pursuing new and exciting avenues of research. Perhaps most importantly, ELA researchers are now in direct contact with IISD’s policy researchers, who can use the science generated from the ELA to back up their work and directly impact policy-making decisions. With IISD’s more than twenty years of experience conducting policy research and generating policy recommendations to all levels of government and communities, both in Canada and internationally, IISD-ELA represents a unique example of field science and policy research and recommendation occurring under a single organizational umbrella.

IISD-ELA is, of course, not without its challenges; securing funding beyond the commitments of the Ontario and Manitoba governments remains a huge priority to allow for the long-term stability of the program. As we enter the fall of our first year as an independent entity and wrap up the open water season, we’re reflecting on where we’ve been and doing some critical planning for the future. This includes prioritizing our activities given the resources we have, and finding the resources needed to expand and grow. We have partnerships to forge and research proposals to develop, but science and experimental research that informs public policy will always be at our core.