In Canada’s largest act of civil disobedience, over 1,000 people were arrested for protesting against the logging of old growth forests. During these protests, which were concentrated in Fairy Creek, a southern Vancouver Island region, many risked fines and jail time to protect old growth forests. But what makes forests “old growth” and why are these trees so special?

Old growth forests are ancient ecosystems consisting of old and often large trees. In British Columbia, forests are defined as old growth depending on their location and considering factors such as tree species and environment. For example, trees in the wetter coastal area need to be more than 250 years old to be considered old growth. But if the trees are in the drier interior, they only need to be more than 140 years old since these trees are typically shorter-lived and prone to wildfires and insect outbreaks.

These criteria are not perfect, and other attributes such as forest structure and composition must be taken into account. Still, old growth forests typically have large trees of various ages and sizes and numerous tree species. The very tops of the forest where the trees’ crowns meet, the forest canopy, can be thick and multi-layered in old growth forests, with canopy gaps that let sunshine in.

According to the B.C. government, there are more than 11 million hectares of old growth forests there. But a recent study conducted by Canadian ecologists found that most of the areas deemed old growth by the province are not the large trees we think of, but low-productivity forests consisting of small alpine or bog wetlands. Specifically, as of two years ago, less than 3% of the province’s most productive valley-bottom large trees remain – a total of roughly 35,000 hectares. This includes select areas of the temperate rainforests on Vancouver Island and the slopes of the Rockies where biodiversity flourishes. 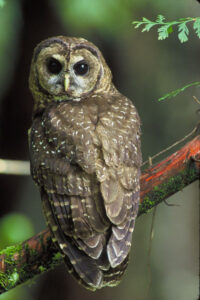 The multiple layers of the canopy in old growth forests, a result of the varied ages and sizes of the trees, provide a unique habitat for plants such as mosses, as well fungi and lichens that can’t be found in younger second-growth forests. Old growth forests in B.C. also house endangered species of animals such as mountain caribou, fishers, and northern spotted owls.

As a result of their biodiversity, old growth forests are less susceptible to damage from wildfires. Specifically, the large trees, layered canopies, overall cooler temperatures, and moist air and soil contribute to their resilience. Older and larger trees also typically absorb and retain more moisture, which helps combat dehydration during the drier and hotter summer months. The trees burn with less severity, making these forests more resilient against the effects of climate change.

Old growth trees have significance in Indigenous cultures. For thousands of years, coastal First Nations in British Columbia have relied on old growth cedar trees for daily use and ceremonial purposes, such as making baskets, ropes, totem poles, fishing gear, and cedar figures for potlatches. Cedar also plays an important role in the spiritual beliefs of coastal First Nations. Indigenous practices of modifying trees have been passed down through generations. Since the Indigenous Peoples of B.C. have a significant cultural and spiritual connection with forests, old growth forests are an important part of maintaining their culture.

Trees capture carbon from the atmosphere through photosynthesis and store it in every part, from the roots to the leaves. However, the role of old growth forests in actively capturing carbon has been controversial. Researchers previously thought that old growth forests continue to sequester carbon, but recent studies show that the contributions of old growth forests to climate mitigation are overestimated. After years of taking up carbon, old growth trees likely reach an equilibrium in which they emit carbon dioxide at the same rate as they absorb it.

Nevertheless, old growth forests still store more carbon than younger forests. Logging releases this tremendous amount of carbon back into the atmosphere. Carbon released into the atmosphere in the form of carbon dioxide, a greenhouse gas, traps heat and contributes to climate change. Although increased carbon dioxide can speed up tree growth in certain places, the overall impact is detrimental to the environment because it contributes to increasing global temperatures.

Nearly 200,000 hectares of forest are logged each year in B.C., with 27% of the yearly harvest coming from old growth forests. In some areas, old growth forests are harvested because younger forests have not grown enough yet. Old growth trees are logged to produce many high-end or specialty wood products such as furniture and musical instruments. The forest industry is profitable, having generated $13 billion in 2019 and $5.6 billion in 2020 in provincial GDP. The timber sector employs approximately 50,000 British Columbians.

But the impacts of logging old growth might already be affecting humans. Since forests typically soak up water from heavy rainfalls, logging old growth forests has been thought to contribute directly to flooding in the province because it alters how water runs off slopes. 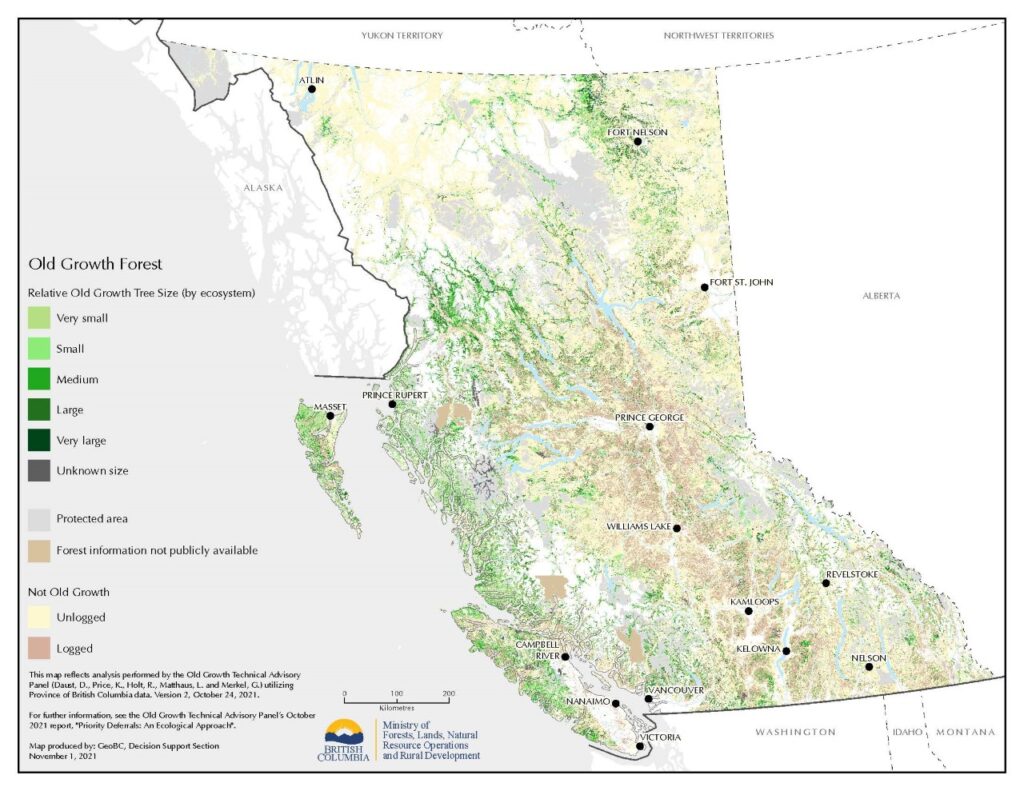 With old growth trees being continuously harvested and rising global temperatures changing the climate, old growth forests may not regenerate in the next few hundred years. Some scientists categorize old growth forests as “critically endangered” if logging continues at the current rate. Experts in the field know that old forests are not replaceable, even with promising restoration strategies. Now more than ever, government leaders must choose between the immediate gains of profit and jobs in the forestry sector versus protecting the environment for our future.