“If all you have is a hammer, everything looks like a nail” – Abraham Maslow

Science oriented people — scientists, science communicators, and just plain enthusiasts â€“ have a tendency to see the science in everything. A puddle of water becomes a microbiologist’s zoo. The twinkle of stars is an astronomer‘s trip back in time. Even the turning of leaves becomes a lesson in biochemistry.

When it comes to science bloggers, our effort to share science with wider audiences sometimes leads us to blog more tenuous scientific connections to events and other things in popular culture.

Nothing brings that home more than a holiday. Give us Valentine’s Day and we’ll blog on the science of chocolate and wine. Give us St. Patrick’s Day, and we’ll bring you a nanoscale shamrock. For Easter, in place of chocolate eggs, you’ll get the geology and history of Easter Island.

And give us Halloween and … well, take a look at what our bloggers have to say about our spookiest holiday â€“ 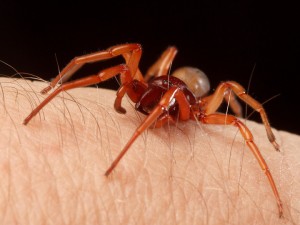 One night I was convinced a monster of gigantic proportions was coming to get me. I was shocked to learn that my monster was in fact a nighthawk performing its territorial display. For those of you who have never heard this display, listen to some of the “peents & boom sounds” at this link http://birds.audubon.org/birds/common-nighthawk. 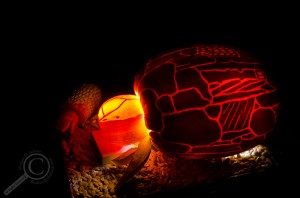 “Stem cells and Halloween don’t typically go together unless, like me, you’ve noticed the similarities between zombies and regenerative medicine.”

“We owe the presence of the squash bee (Peponapis pruinosa) in Ontario to First Nations peoples: squash bees are thought to have migrated from Central America following the cultivation of squash. These bees, now widespread in southern Ontario, are quintessential agricultural bees because they forage for pollen only on plants in the genus Cucurbita, represented here entirely by a small group of agricultural crops including pumpkins, squashes, summer squashes and gourds.”

And finally, here is my own post on real-life frightening forest sounds, sights, and night creatures. I only wish I had known about Krista Patriquin’s nighthawk encounter. I’d have certainly added that spooky soundtrack â€“ for the sake of science, of course!