On Friday, September 22, Science Borealis partnered with the Science Writers and Communicators of Canada (SWCC), Vancouver’s Curiosity Collider, and the Royal BC Museum (RBCM) for an evening of science communication fun.

The event was originally meant to be just an SWCC Book Award presentation, but former SWCC Board member Shelley McIvor (also a co-founder of Curiosity Collider) took the initiative to make it a multi-faceted science communication evening.

As the audience was arriving, Chris O’Connor, the RBCM’s Learning Program Developer, asked people to do an online poll asking how they get their science news. I was happy to see ‘blogs’ on the list as a science news source.

Kicking off #SciCommNightBC with a Q to the crowd: where do you get your #science? pic.twitter.com/3HGsv90MG2

The evening started with Jude Isabella, former SWCC Vice-President and current Editor-in-Chief of Hakai Magazine, presenting Mark Leiren-Young with the SWCC Book Award for The Killer Whale Who Changed the World. Leiren-Young gave a riveting reading from the beginning of the book, convincing many in the 50-person audience to purchase it and find out how it ended. 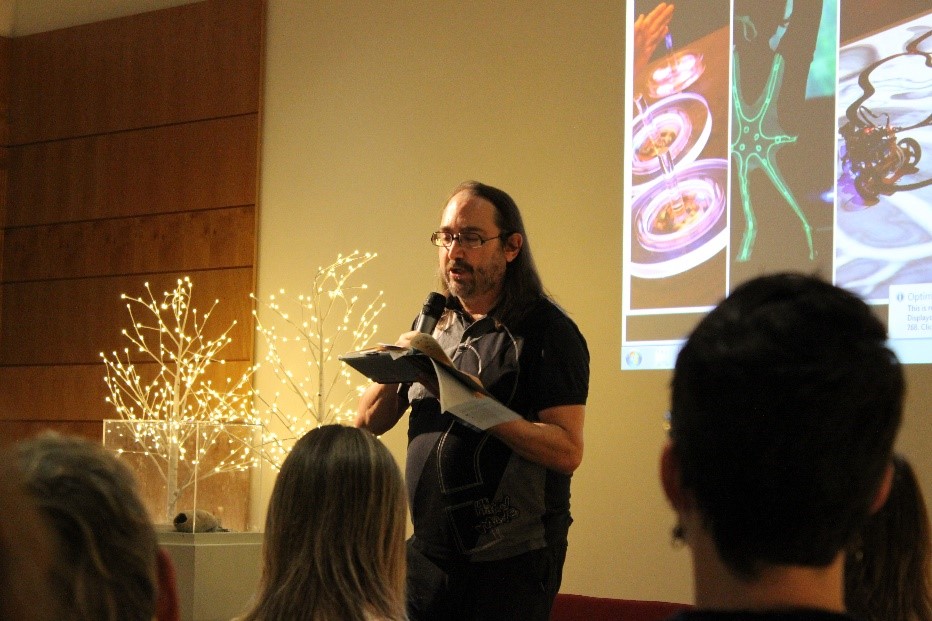 Mark Leiren-Young reads from his book, The Killer Whale Who Changed the World. 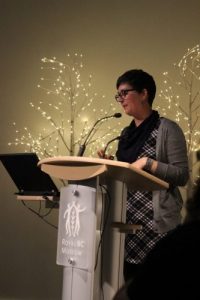 After Leiren-Young’s reading, I introduced Science Borealis, and asked the audience to vote for our People’s Choice Award for Best Science Online. I then turned the stage to two of our syndicated bloggers, Catherine Scott (@catareana) and Sean McCann (@Ibycter), to present their work on communicating spider science. Scott gave a great presentation about her work at Victoria’s Island View Beach, about how her tweets about spider sex made it into the mainstream media, and about a new public initiative she and her colleagues launched on October 1 â€“ Recluse or Not? 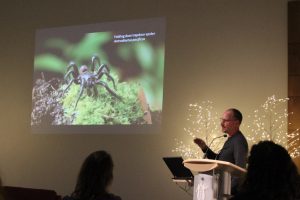 McCann followed up with stunning photographs of spiders and other insects at Island View Beach, plus some new observations about a spider that had previously been considered mild and harmless, but actually was a stealthy nighttime killer.

Scott and McCann were followed by Shelley McIvor, who talked about the interdisciplinary artâ€“science events that Curiosity Collider has hosted in Vancouver. She then turned the podium over to science artist Larissa Blockhuis, who engaged the audience in her work entitled Eclipse: What Happens Next?. Blockhuis’s goal was to create collaborative art informed by evolutionary biology. She shared a sculpture of a beetle with the audience, then asked people to use what they know or imagine of evolution to figure out how the eclipse (or a similar big event) might cause species adaptation. At the actual Curiosity Collider event, she sculpted new iterations of the beetle based on audience responses. 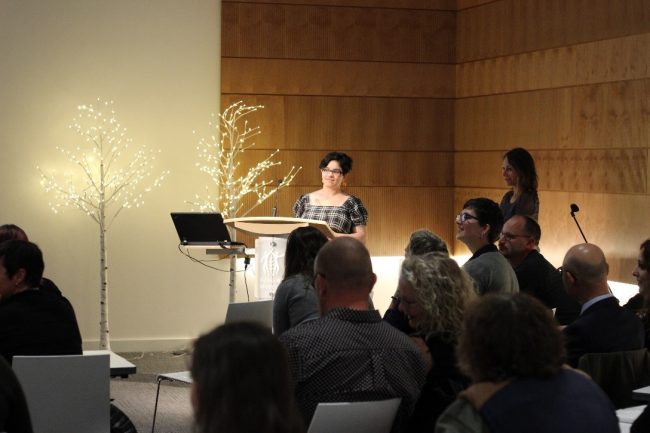 The Curiosity Collider was followed by the final presenters: Dr. Henry Choong and Hugh MacIntosh, Curator and Collection Manager, respectively, of Invertebrates at the RBCM. Choong talked about his work on hydrozoans, which are “mostly marine animals related to jellyfish and corals.” He explained the history behind the RBCM’s collection of hydrozoans, noting that he often thinks of romance when he studies these species, because a scientist in the late 19th century named one species after the love of his life.

Henry on the haplessness and hope of talkin' up hydroids, happening now. @RbcmHydroids #scicommNightBC pic.twitter.com/GN6eJ6dMWJ 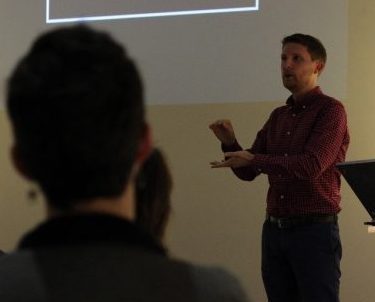 Hugh MacIntosh, Collection Manager of Invertebrates at the RBCM, talks about museum collections.

MacIntosh talked about the importance of metadata in specimen collection: knowing what was collected, where, when, and how, and having a description of the sample at collection is critical for people who want to use the collection to do research. This was a key point both MacIntosh and Choong wanted to get across: museums aren’t just places where things are stored and looked at occasionally, they’re also places where active research is going on, either through the existing collections or through work beyond the collection. For example, Choong has studied hydroids that hitchhiked from Japan to Canada’s West Coast on tsunami debris.

The night ended with a taxonomy exercise from Chris O’Connor. Each table was given a ‘specimen’ and asked to come up with a short description for it, which could be used to describe it in a museum collection.

All in all, it was a fascinating evening that covered a range of science communication topics and approaches. It was great to partner with these organizations to get the word out about science communication. It was also great to finally have an event on Vancouver Island, as most events are in Vancouver. We’re looking forward to hosting another scicomm event in Victoria as part of the SWCC Annual Conference in Vancouver on April 12â€“14, 2018. In the meantime, we look forward to Victoria scicommers coming together to organize local events before then.

This event was organized as part of Science Literacy Week.

Thanks to Science Borealis Outreach Manager and Curiosity Collider co-founder Theresa Liao for coordinating social media about the event and taking pictures. Thanks also to Kristina Campbell, SWCC member, for behind-the-scenes work to organize the event and for live-tweeting and Periscoping during the event itself. Read her blog about the event on the SWCC website. At our snack table, Kristina set up two donation tins: one for the Oxford comma and one against. Guess which one won? The Oxford comma (of course)! 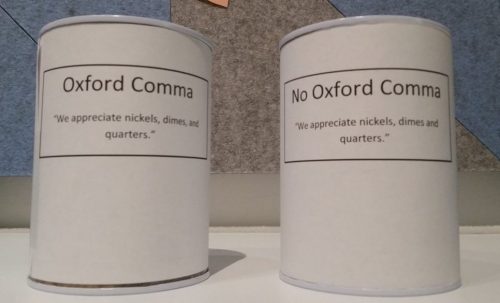