Wolverines, Gulo gulo, like their mutant counterpart, enjoy their “alone time” and few people are lucky enough to see one in real life. Even wolverine researchers Nicole Heim and Jason Fisher admit they have never seen one off camera. The closest Jason came was tracking a snarling wolverine through the snow – but even though he heard it making terrifying noises at him, he just couldn’t get close enough for a visual ID.

So how do you research an animal that’s so elusive? It is a challenge! Because not only are wolverines elusive, their home ranges can be large – 100â€“600 km2 depending on their sex and location.

Nicole and Jason are part of the Alberta Wolverine Working Group, a team trying to compare wolverine population density and behaviours in the Rocky Mountain national parks (Banff, Yoho, Kootenay), where human disturbance is minimal, and Kananaskis Country, a mixed-use area where human disturbance is more common. To do this they use a series of camera traps baited with a “juicy beaver carcass.” That carcass makes an irresistible meal, attracting local wolverines (and a slew of other hungry animals like martens, fishers, red and flying squirrels, and even Clark’s nutcrackers, among many others) for a mid-meal photo op. 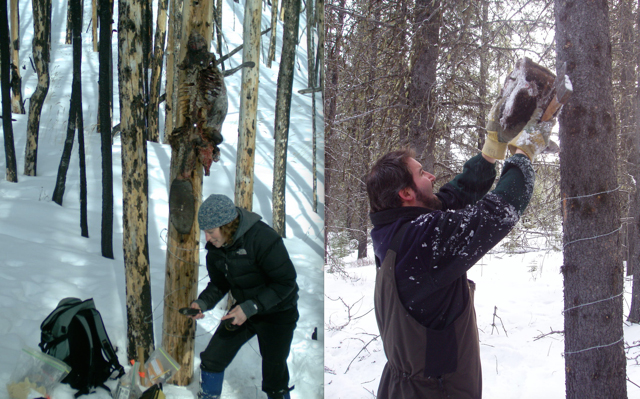 Each camera trap station allows for a visual ID of individuals with distinct coloration patterns, like Hookneck (below), as well as genetic identification material from hair snagged by barbed wire.

The wolverine known as Hookneck, whose colouration patterns make him easy to identify. His movement over the study site ranged nearly 1,000 km2. Photo: InnoTech Alberta, and Alberta Environment & Parks

Nicole and Jason’s research had some surprising results. They found that the wolverine population size in Banff, Yoho, and Kootenay was around 50 individuals, with a population of only 7 individuals in the adjacent (but less protected) Kananaskis Country. 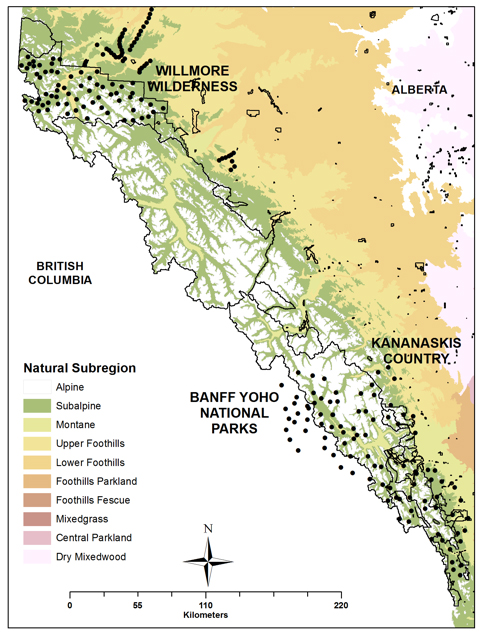 The study area in the Canadian Rocky Mountains stretches from the Willmore Wilderness in the north, to Banff and Yoho National Parks in the south. Dots indicate bait stations, each consisting of a camera trap and hair snag. Photo: InnoTech Alberta.

The prevailing thinking in the US wolverine research community is that populations are decreasing (and ranges shrinking) because of climate change. However, the Alberta Wolverine Working Group is showing that climate change is only half the problem. Landscape change due to human use is the other big culprit, and the animals are avoiding habitats that have been disturbed by resource extraction. But it’s not just human activity pushing the wolverines out – other medium-sized carnivores that do well in human-impacted landscapes may be increasing, leading to increased competition with wolverines.

It can be hard to eke out an existence as a wolverine. They have a fearsome reputation, and videos abound on YouTube of wolverines fighting off wolves or bears. However, a wolverine’s bark may be more than its bite. Even though wolverines may show their teeth and snarl, an individual wolverine’s response to a competitor depends on age, sex, and aggressive attitude – after all, it is a medium-sized carnivore that could be killed by a grizzly bear or wolf. According to Nicole, it’s a trade-off between risk and reward; trying to find kill sites to scavenge, but where other bigger and meaner carnivores may be present.

The interactions or processes making these disturbed areas in Kananaskis Country unsuitable for wolverines have yet to be definitively established. However, as Nicole notes, “The significant reduction in population numbers outside protected areas suggests that wolverines are indeed vulnerable to our ever-increasing land use demands.”

Current management decisions in Alberta are based on the assumption that the “working landscape” – where wildlife and human activities overlap – supports biodiversity. But Jason points out that their research challenges this assumption for wolverines, and that managers need to “adjust decision-making accordingly.” The long-term survival of wolverine populations in the central Rocky Mountains, and elsewhere, will rely heavily on minimizing disturbance near the boundaries of our protected areas.

Wolverines’ shyness also works against them. Grizzly bears are often spotted in the wild, and if we stopped seeing them, there would be a public outcry and resource managers would act quickly to save the population. The sad fact is that as long as we think of Hugh Jackman rather than Gulo gulo, the conservation needs of wolverines will be overlooked.

So how do you gain the necessary public attention to support wolverine conservation efforts? You recruit Hugh Jackman to do public service announcements!! Just kidding… It is a tough question, and one that researchers and wildlife managers alike struggle with. What do you think? What would you do? Wolverines need your help!

Feature image: The elusive wolverine. This individual was caught on camera making off from the bait station with a large piece of beaver carcass. Photo: InnoTech Alberta, and Alberta Environment & Parks

3 thoughts on “The elusive wolverine: Beyond the X-Men character”