Last month, QuÃ©becers learned that money talks when it comes to manipulating science information, whether you pay a public relations firm a high enough price, or if you buy advertising. At the same time, however, we’re cutting funding to science journalism. Perhaps these two should be reversed?

TransCanada Pipelines contracted the American PR firm, Edelman, to develop a strategic plan aimed at convincing QuÃ©becers of the advantages of the future Energy East pipeline. This plan was obtained by Greenpeace, and was all over the QuÃ©bec media on November 17th.

Meanwhile, in mid-November, Alberta climate skeptics with the improbable name “Friends of Science” put up a couple of billboards in Montreal with the sentence (in French) : “The Sun is the main driver of climate change, not you.” We don’t know who finances this group, but the oil industry was their main supporter in 2006, and the same billboard appeared in Calgary last June. 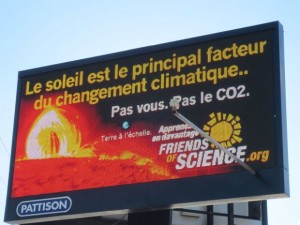 The Friends of Science billboard in Montreal (from the ACS Indigogo campaign website).

So what was the Edelman strategic plan all about? Amongst other recommendations:

A few days after this media buzz, TransCanada announced that these were only recommendations, and that it was ending its relationship with Edelman.

However, as authors like science historian Namoi Oreskes (Merchants of Doubt, 2010) have written over the past few years, this strategic plan was not at all unusual. The same tactics were used by oil companies in the 1990s, tactics cut and pasted from those used during the 30 years of the tobacco ‘debate.’

Very few science writers have the time to analyse those tactics, or even ask if they’re efficient enough to influence policy. One could say the answer is yes, at least in North America: many studies show that the more right-wing somebody is, the more likely they are to be a climate skeptic. Unlike what scientists used to believe, there is no correlation between climate skepticism and scientific illiteracy.

Australian science blogger Jayde Lowell wrote on November 30th that, in such a reality, climate skeptic defenders are many steps ahead in the public relations war. All they have to do is to play the ideological card or the emotion card.

Science bloggers, however, do have a role to play, as Kimberly Moynahan wrote on this same Science Borealis page in September:

Our feeling is that science bloggers are in an ideal position to educate the public, nurture engagement, help foster a positive attitude towards science, and serve as models for young people who are interested in pursuing scientific careers.

And this work cannot be done without science journalists. The weaker the profession of science journalism, the more science blogging as a community is also weakened. Which strengthens those PR companies and their strategic plans: as journalist Patrick LagacÃ© reminded us, TransCanada’s stock value is about $39 billion, while Edelman is one of the biggest public relations companies in the world, with 5000 employees.

“La culture scientifique,” as we say in QuÃ©bec, needs to be strong, visible, and eloquent. All of this requires science journalism: in newspapers, on television, on the web – even in small, specialized outlets like mine, the Agence Science-Presse. Think about it this way: at this moment, there are more good journalists than ever with a science background, but many of them never write about science because there are fewer and fewer paid opportunities for them.

At the end of November, l’Association des communicateurs scientifiques (ACS), the QuÃ©bec equivalent of the Canadian Science Writers Association (CSWA), organized a crowdfunding campaign to reply to the climate skeptic billboards by installing more rigorous billboards. It was a success, with the $10,000 goal reached in just a few days. But since the primary goal of this campaign was to spotlight the struggle of those who produce real science information, the next steps are also in the hands of science bloggers. It is in their interest to convince universities, research institutions, and private companies to invest in science journalism. And in the current political climate, we could definitely do with more of that. 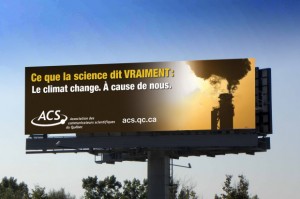