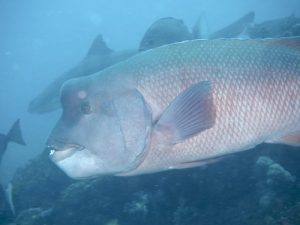 I recently watched a fascinating nature documentary series called Blue Planet II and was blown away by the wildlife spectacles that I saw and learned about in the series. One scene that especially stood out to me featured a 10-year-old female kobudai, a type of oceanic fish, that hid in a rock crevice for several months. When the fish finally emerged, it was bigger than it was before it hid, with a large, bulb-shaped forehead and an aggressive personality. The previously female fish was now male! The new male then returned to its group, where it won a fight against the current dominant male that it once mated with when it was female! It then took over the role of dominant male.

The kobudai isn’t the only species that can change sex in its lifetime. In fact, around 500 fish species can change sex during adulthood, often in response to environmental cues. Many are sequential hermaphrodites, meaning that at a certain point in their lives, they can switch to the opposite sex permanently. 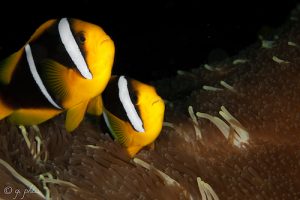 Another sequential hermaphrodite is Clark’s anemonefish, a type of clownfish that lives in small groups, each made up of one breeding male-female pair and several subordinate, non-breeding individuals. If the dominant female dies, the largest male in the group turns into a female.

In Finding Nemo, a movie about a young clownfish named Nemo who goes missing, Nemo’s dad loses his mate and raises Nemo on his own. In reality, Nemo’s dad would have become female after losing his mate and paired with a male! 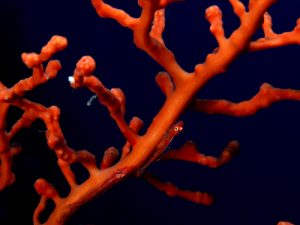 Some species can actually switch sex more than once throughout their lives. Called bidirectional hermaphrodites, these species can alternate between being male and female, depending on environmental conditions. For example, the coral goby, a fish that lives inside coral crevices, can do this. This species doesn’t move much throughout its life and has few chances to find mates, so if any two fish, regardless of sex, come across one another and form a female-male pair, it’s beneficial.

Why do some animals change sex?

The ability to change sex in adulthood for many species is adaptive. For instance, if a fish can reproduce as female for the first part of its life, then continue breeding as a male for the rest of its life, it essentially doubles how many offspring it can produce. In turn, if social or environmental circumstances change, this maximizes the chances of it passing on its genes.

Another reason for changing sex can be described as the size advantage hypothesis: for some fish, it’s more beneficial to be a different sex when it gets to be a particular size. For the kobudai, where a dominant male has a harem of smaller females, it’s advantageous to turn male later in life when larger. In clownfish, large females have higher fertility than smaller ones; as a result, dispersing sperm when small and gestating eggs when large is more efficient.

Fish may also change sex because of certain water pollutants, namely hormones and hormone-like chemicals. Chemicals that mimic actual hormones and bind to the same receptors on cells that hormones normally do are called “endocrine disruptors.” They can switch some normal cell functions on or off at the incorrect time, causing an animal to develop or behave unnaturally. In the case of fish, endocrine disruptors can make certain male fish look and behave like females. This is problematic because these feminized males may not want to fertilize females’ eggs or may not do a good job of it, ultimately resulting in fewer baby fish. 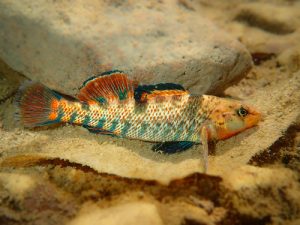 The feminization of male fish has been occurring in waters throughout North America. Between 2007 and 2012, it was happening to male rainbow darters in Ontario’s Grand River. A team of scientists studying this phenomenon found that depending on the year, 80 to 100 per cent of the male rainbow darters they studied were producing eggs, something only females should do. The males were also not as colourful as they should be, a trait that normally helps males attract female mates. The feminization of fish may be an early warning sign of emerging pollutants that could impact biodiversity and human health.