Teleportation has finally become a reality. But before you get too excited, the type of teleportation scientists are experimenting with is not the same as what you’ve seen on Star Trek. Scientists are not trying to teleport people or objects from one place to another. Instead, they are teleporting information in the quantum world, where things simply don’t behave the same way as they do in the world we can see.

Quantum teleportation has the potential to revolutionize current technology, especially in the areas of communication and computing. “Teleportation will likely be a key element of the quantum internet, when it comes to fruition,” explains John Nichol, an assistant professor of physics at the University of Rochester. Imagine a world where information could be sent and received instantaneously through a quantum internet and computers could store and calculate information at a substantially higher speed than is currently possible. But before we explore what quantum teleportation can do, let’s take a look at how it actually works.

To understand quantum teleportation, we must first look at quantum entanglement, a process so strange that Albert Einstein famously described it as “spooky action at a distance.” Quantum entanglement occurs when a pair or group of particles are generated in such a way that their behaviour can no longer be described as independent of each other, even when the particles are separated by great distances. A particle’s behaviour is described by its quantum state, which defines all the possible outcomes of a measurement on that particle. When particles exist in quantum entanglement, their quantum states are always correlated, meaning a measurement on one particle will allow us to know something about the state of the other. For example, imagine two entangled particles as a pair of gloves. If you were to mail each glove in separate boxes to two different locations, by opening only one box, you could determine whether the left or right glove was in the other box. 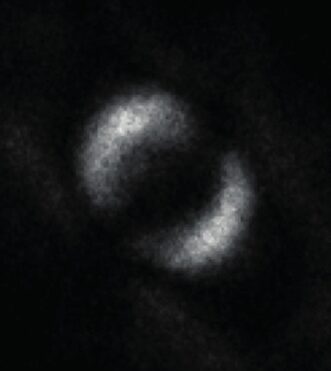 How particles are connected and communicate within a system of quantum entanglement is still a mystery, but scientists have succeeded in using the phenomenon to their advantage. In 1993, a group of physicists from Canada, the United States, France, and Israel collaborated to transfer, or teleport, the quantum state of an independent photon across two entangled photons. The process can be explained by considering a scenario in which there are two observers, Alice and Bob, who each possess one of a pair of entangled photons. The entangled photons have quantum states of either up or down. Because they are correlated, when measured, one photon will be in an up state and the other in a down state because entangled particles can never be in the same state (in this case, both up or down).

Importantly, information telling Bob that his entangled photon is now an identical copy of the yellow photon must reach him from Alice. If he is able to determine instantaneously that his photon has changed, this means that the information has travelled to him faster than the speed of light, which is impossible within our current understanding of physics. 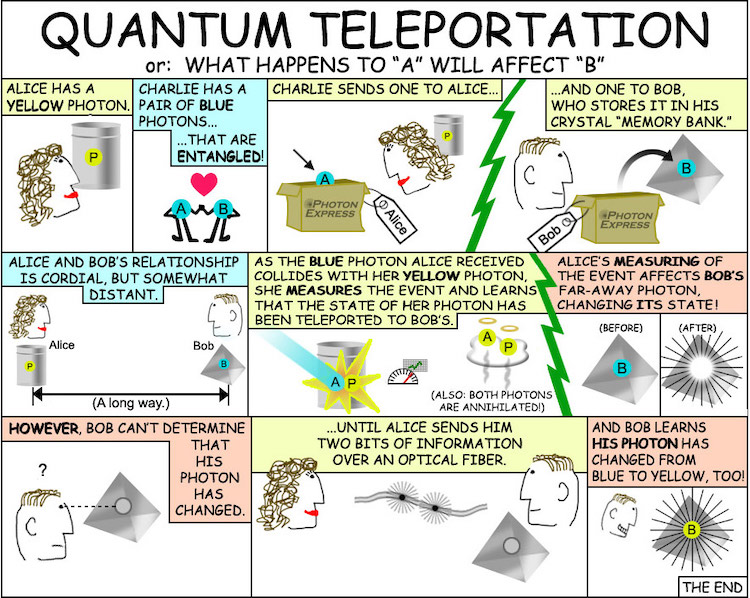 Courtesy of NASA/JPL Caltech, CC BY 4.0

The yellow photon has not really been teleported in the sense that it has physically moved. Instead, Bob’s photon has taken on the quantum state of the yellow photon, forming an exact copy. The yellow photon is annihilated because an original particle and its copy cannot exist simultaneously, as outlined by the no-cloning theorem in physics. This means that if Star Trek were using this type of teleportation, Captain Kirk would be annihilated and an identical copy of him would be formed at his destination every time Scotty beamed him up.

Since 1993, several experiments have successfully demonstrated teleportation in various other materials including atoms, ions, and superconducting circuits. In 2017, a group of Chinese physicists achieved space-based teleportation by teleporting information from Earth to the Micius satellite, a record distance of 1,400 kilometers.

Scientists are continuing to push quantum teleportation into space, with plans to integrate teleportation into the design of space-based telescopes and satellites. “There are already efforts underway in different countries to create quantum networks in space,” explains Nichol. “Teleportation is often a key element of benchmarking these satellite-based systems [and] can also be used to create remotely entangled pairs of particles for secure communication protocols.”

In June of this year, scientists from the University of Rochester and Purdue University confirmed that quantum teleportation is possible between electrons, a discovery that has major implications for the world of quantum computing. The researchers, including John Nichol, explained their findings in an article published in Nature Communications. 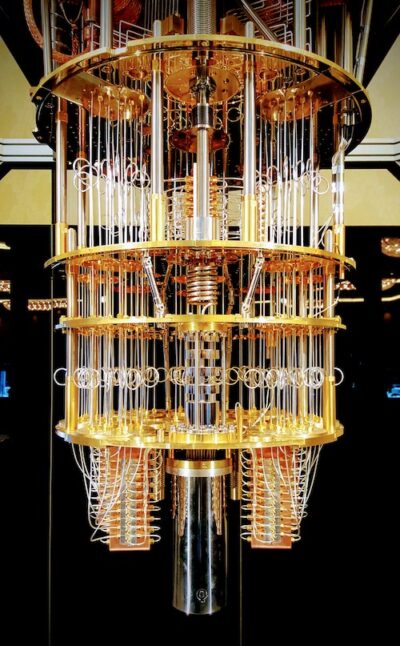 In current computing methods, billions of transistors called bits, transfer information through a single binary value 0 or 1. By comparison, quantum bits (or qubits) have the ability to exist as both 0 and 1 simultaneously. “Electrons are desirable qubits because they can be manipulated quickly and their coherence times (the length of time over which they can retain quantum information) can be extremely long,” says Nichol. “Compared with photons, electrons also interact easily with each other, which is a key requirement for quantum computing.”

Quantum teleportation has the potential to revolutionize the way we obtain and pass on information, whether it is in areas of communication, computing, healthcare, economics, or other industries. One day, we may even succeed in teleporting matter. But for now, that kind of spooky action is still in the distant future.