The world is on fire. From British Columbia to Greece, the growing effects of climate change have become impossible to ignore. In its latest report, the Intergovernmental Panel on Climate Change (IPCC) stated that “it is unequivocal that human influence has warmed the atmosphere, ocean and land.”

So, where does that leave us? When world leaders signed the Paris Climate Agreement in 2016, they pledged to reduce our global greenhouse gas emissions enough to limit global warming to about +1.5Â°C compared to the pre-industrial global temperature by 2030. These leaders sought to decarbonize the future through renewable energy, energy efficiency, and capturing carbon for storage and use. Canada went further and committed to net-zero emissions by 2050.

This post examines what carbon capture is, what is holding it back and an innovation that could move this process in the right direction.

Carbon dioxide (CO2) is a simple gas composed of two carbon atoms and one oxygen atom. As a greenhouse gas, CO2 absorbs heat (thermal infrared energy) from the Earth’s surface and slowly re-radiates it into the atmosphere. Without greenhouse gases, the Earth’s average temperature would be below 0Â°C. In contrast, when there is an excess of greenhouse gases in the atmosphere, too much heat becomes trapped in the atmosphere, adversely affecting the planet’s climate. The constant rise in CO2 levels since the Industrial Revolution is attributable to the significant increase in fossil fuel consumption. CO2 levels reached 419 parts per million (ppm) in May of this year, while pre-industrial CO2 levels were only about 278 ppm. This increase in CO2 has resulted in a global temperature increase of about 1Â°C.

Carbon capture and storage (CCS) technology is one way to remove excess CO2 from the environment. CCS technologies can capture CO2 directly from power plants and store it safely. The captured CO2 is held at temperatures and pressures at or above its critical point (31.0Â°C and 7.3773 MPa) to form supercritical CO2 (the fluid state of carbon dioxide that has properties between a liquid and a gas). This fluid is pumped into deep geological reservoirs for permanent storage. Because the supercritical CO2 state has liquid properties, it can be stored in much less space than is needed for CO2 gas. The natural temperature and pressure of the Earth’s crust are ideal for keeping CO2 in a supercritical condition. Because CCS captures CO2 at its source, before it escapes into our atmosphere, this method presents an obvious path to net-zero emissions. 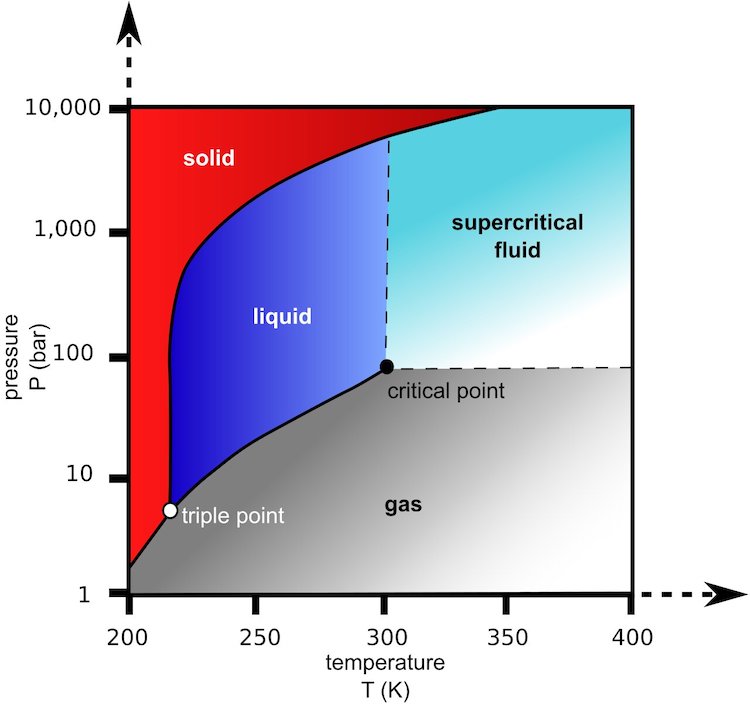 Carbon dioxide becomes a supercritical fluid when it is held above its critical point. In this state, it possesses chemical properties from both its liquid and gas phases. Image source: Wikimedia Commons CC0 1.0

Carbon capture and storage and the oil industry

Ironically, captured carbon is routinely used by the oil and gas industry. Permanently storing captured carbon requires reservoirs at great depths, usually more than 800 metres beneath the Earth’s surface. Depleted oil reserves leave behind such spaces. As an added bonus, supercritical CO2 is a solvent for residual oil. In a process called enhanced oil recovery, supercritical CO2 is pumped into wells to create a high-pressure environment that lowers the oil’s viscosity, allowing the oil to flow out of hard-to-reach pockets and be pumped more easily to the surface. Approximately 80 per cent of the global captured carbon supply is used for enhanced oil recovery. This process can increase the amount of recoverable oil from a reservoir by as much as 60 per cent.

While injecting oil and gas drill sites with captured CO2 provides a means of carbon storage, it also prolongs the life of an industry that contributes to climate change. For that reason, on July 27, 2021, 500 organizations across Canada and the U.S. co-signed a letter to Canada’s prime minister urging him to stop investing government funds in carbon capture and storage projects.

One signatory is Environmental Defence, a Canadian organization that champions the protection of our environment and the development of a clean economy. Julia Levin is the Senior Climate and Energy Program Manager at the Environmental Defence. She says governments are giving oil and gas companies a license to pollute by incentivizing carbon capture projects with public funding and tax credits. According to Levin, there are currently no regulations mandating the retrofitting of existing infrastructure with CCS. In addition, companies rarely promise to improve existing structures such as oil refining plants, opting instead to build new ones.

New ways to use sequestered CO2

Industries that profit from sequestered CO2 need to find solutions that don’t perpetuate high emission activities. Companies like Calgary-based Carbon Upcycling Technologies gives carbon a second chance by upcycling it into manufacturing materials and consumer products. Rather than storing CO2 underground, the company’s technologies repurposes the captured carbon emissions into solid nanomaterials. This process not only sequesters CO2 but also strengthens the material it’s being stored in and enhances the material’s properties.

One of Carbon Upcycling Technologies’ most promising products is its concrete additive. Concrete is a mixture of cement, water and aggregates such as gravel. But manufacturing cement has a costly carbon footprint, accounting for eight per cent of global carbon emissions. Carbon Upcycling Technologies repurposes fly ash (a waste product of burning coal) by enhancing its ability to absorb CO2 producing nanoparticles that behave like cement. This enhanced fly ash is added to the concrete mixture, creating a product with a highly reactive surface. The result is a stronger, more sustainable concrete using less cement. Apoorv Sinha, the company’s CEO, hopes to scale up this process to produce concrete with 20 to 30 per cent less cement.

Watch this excerpt from the NOVA episode ‘Can We Cool The Planet?’ to learn how Carbon Upcycling Technologies’ next-generation concrete is made:

We must shift to energy sources that produce fewer or no greenhouse gases. But in the meantime, we need to deal with our ever-increasing carbon emissions. If the carbon capture sector continues to grow and innovate, and those innovations are scaled up to make them economically viable, then sequestered carbon can become a meaningful tool in Canada’s climate plan.

Banner image: A wind turbine peaks out above the morning mist. Photo by Sander Weeteling on Unsplash, CC0