Have you ever looked closely at moss? These tiny plants, described by F. E. Tripp in his 1868 book British Mosses, their homes, aspects, structure, and uses as “the soft green beds into which our feet sink”,  grow almost everywhere in the world.

And yet mosses are often overlooked — in our everyday lives and in research, too. For example, scientists do not always account for these simple, small and ubiquitous plants in their climate models, even though doing so could help us better understand climate change.

The goal of my Master’s research is to help fill that gap. As part of my Master’s degree in geography at the University of Montreal, I will work to include mosses as a vegetation type in Environment and Climate Change Canada’s Canadian Land Surface Scheme Including Biogeochemical Cycles climate model – called CLASSIC for short. 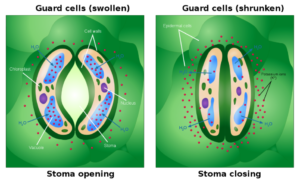 A stoma in a plant’s leaf opens to let water enter or leave the plant (left). It closes to prevent water from entering or leaving (right) plant tissues. Mosses don’t have stoma and, therefore, cannot control how or when water enters or leaves their tissues. Image by Ali Zifan, CC BY-SA 4.0.

Most plants are “vascular”. This means they can control the water entering or leaving their tissues via stomata, tiny pores in leaves and, sometimes, stems that allow gasses to enter and exit the plant. A vascular plant may close its stomata in dry conditions to prevent water loss and would open its stomata when it rains to allow water in.

Mosses, however, have no stomata. Mosses are not vascular plants and cannot control how water enters or leaves their tissues. Despite this, over the 300 million years or so since they first appeared on Earth, mosses have successfully adapted to survive in a wide range of habitats and environments around the world.

Sphagnum mosses are the most common moss species in Canada’s north. In these higher-latitude regions, they are a main component of peat, layers of organic matter made mostly of partially decomposed plants — including Sphagnum — that have accumulated under conditions of waterlogging, low oxygen, high acidity and few nutrients.

Sphagnum can hold 20 to 30 times its weight in water.  When these mosses decompose – at a much slower rate than vascular plants – they make the soil more acidic. These unique characteristics can lead to interesting phenomena such as bodies being preserved in bogs for thousands of years. They  also contribute to the environmental conditions that favour peat formation.

Because peat is made from partially decomposed organic matter, peatlands store as much as 800 gigatonnes of carbon. This is important for our climate: stored carbon is not available to form greenhouse gases, such as methane or carbon dioxide, that contribute to climate change. 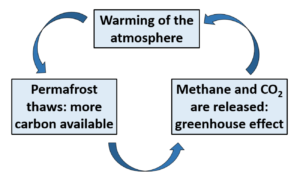 The positive feedback loop caused by permafrost thawing. When the atmosphere warms, it causes events that eventually cause atmosphere warming. The cycle repeats. Image: Rose Lefebvre.

But in recent decades, climate change has been warming the Earth. Higher latitudes are warming at an even higher rate, causing permafrost to thaw. When this happens, those soils release their long-locked-in carbon stocks, making them available for carbon cycling. Through renewed decomposition, fire and other natural processes, the released carbon can transform into greenhouse gases, which further contribute to climate warming, thereby creating a positive climate feedback loop.

Currently, however, no clear consensus exists among climate scientists about what will happen with the north’s vast peatlands under climate change, because the climate models have presented differing conclusions. Thawing permafrost could eventually lead to peatlands becoming either carbon sinks — trapping more carbon — or carbon sources — releasing more carbon into the atmosphere. Although the positive feedback loop presented here suggests peatlands would become a carbon source (with more carbon released), climate warming could also lead to more vegetation being able to grow at higher latitudes. This additional vegetation could then trap carbon, allowing the possibility of a carbon sink.

Including mosses in climate models could help to provide clearer and more accurate predictions.

A model is a way to account for real-life phenomena with mathematical equations and programming. That is easily said but very difficult to do well.

A model can be thought of as a big diagram where many different quantities, or “variables”, influence each other and are related to each other by mathematical equations. Some variables need to be given to the model for it to produce other variables. The mathematical relationships between variables are programmed into the model.

Because the equations that make up models are complex and numerous, models rely on computer programming to run and solve the equations. 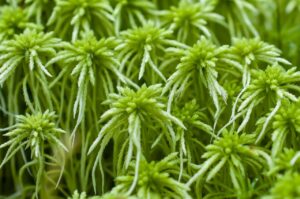 Including mosses, like this peat moss, as a PFT could allow for more accurate climate modelling of northern latitudes. Image by MR_COX on Pixabay.

For example, when we run Environment and Climate Change Canada’s CLASSIC climate model, we tell it what type of vegetation covers the site being modelled, as well as many other variables for that site –  temperature, precipitation, humidity, and so on. In CLASSIC, types of vegetation are called “plant functionality types”, or “PFTs”. For each PFT variable included, the model calculates, for example, how much carbon is produced in a given area.

Problems arise when the type of vegetation covering the site being modelled is not available as a PFT variable. The more such gaps there are, the greater the uncertainty inherent in the model’s predictions.

CLASSIC currently doesn’t include moss as a PFT. When modelling higher-latitude regions like Canada’s north, this gap hinders accurate predictions. Including tiny, unobtrusive — yet widespread — Sphagnum mosses as a PFT in the model will allow northern regions to be modelled more accurately. In 2017, an international team of climate model researchers identified this gap as being a priority area for model development.

My goal is to do that for CLASSIC.

Feature image: Mosses are present everywhere in the world, but are especially common in Canada’s north, where they are an important component of peatlands. Image of sphagnum moss by Neeme Katt from Pixabay.

Rose Lefebvre is pursuing a Master’s degree in science at the Department of Geography, University of Montreal. She wrote this article as part of Science Borealis’s Winter 2022 Pitch & Polish, a mentorship program that pairs students and researchers with one of our experienced editors to produce a polished piece of science writing.