Collaboration is the backbone of science: without it, the boundaries of scientific knowledge would remain fairly narrow, with various areas of science remaining isolated and unable to transfer ideas back and forth.

Like most scientific pursuits, physics is highly collaborative â€“ especially here in Canada. While the United States established a national laboratory system after World War II to develop a range of military technology â€“ notably, the atomic bomb â€“ Canada doesn’t have a similar network. However, we do have several large national collaborative facilities that bring academic and government researchers across the country together with international scientists. As these facilities are typically too large to be built and maintained by a single institution, they are operated by consortia of universities, federal and provincial science organizations, and occasionally industrial partners.

This week we’ll take a brief tour of a few of the major Canadian physics facilities.

TRIUMF (originally the TRI University Meson Facility, acronym now dropped) is a world class subatomic particle laboratory founded in 1968 by the Universities of British Columbia and Victoria, and Simon Fraser University. It is now operated by researchers from 18 universities from coast to coast. Over one billion dollars of public funding has been pumped into TRIUMF since its inception, with researchers bringing in millions of dollars of additional funding each year from federal grants.

While the driving work at TRIUMF focuses on analyzing, verifying, and exploring the fundamental structure and interactions of subatomic particles, the facility is also used in materials science, nuclear medicine (including medical isotope generation), and accelerator engineering research. Since particle physics research involves staggering amounts of data from particle collisions, TRIUMF also has large computational facilities.

TRIUMF houses one of the largest cyclotrons in the world. A cyclotron can be described as a set of large wedge-shaped electrodes with a space between them. The first cyclotrons (and many current smaller machines) used two D-shaped electrodes; however, TRIUMF uses six electrodes that are curved to look like a pinwheel. These electrodes are sandwiched between two enormous (18 meters in diameter!) magnets, which generate a large, steady vertical magnetic field. A strong, variable electric field is generated in the gaps between the electrodes. Charged particles are injected into the space at the centre of the pinwheel, and are accelerated by the changing electromagnetic field in the gaps between the electrodes. As the particles accelerate to higher speeds, they spiral outwards towards the edge of the electrodes. Once they reach the edge, they are siphoned off into a beam line for experimental use.

Designed for high school students, this video gives a neat overview of the physics involved in TRIUMF’s cyclotron. 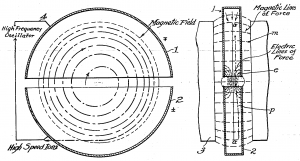 Image from the patent filed by Ernest O. Lawrence for the cyclotron. On the left is a bird’s eye view of the equipment, and on the right is a lateral slice. Cropped from US Patent 1,948,384.

TRIUMF injects negatively charged hydrogen ions (i.e., one proton and two electrons) into the centre of the pinwheel structure. A variable 500 megaelectron volt (MeV) electric field is applied over the electrodes, and the magnetic field generated by the magnets accelerates these ions in a focused beam to Â¾ the speed of light in just 0.3 milliseconds. Extremely thin graphite foil strips the electrons from the beam particles, and four proton beam lines are generated from the main cyclotron. These proton beams are â€“ among other things â€“ a source for generating rare-ion beams used in further particle physics research.

Four smaller cyclotrons generate medical isotopes for medical and industrial partners. Last year, TRIUMF announced that they were able to generate sufficient technetium-99m, an important medical isotope typically synthesized in nuclear reactors, to regularly supply a population the size of Vancouver. Finding alternative sources for medical isotopes is imperative, given that the Chalk River facility is currently the major source of this isotope, but is likely to be decommissioned in 2016.

The Canadian Light Source is a versatile facility that generates light at very specific frequencies and intensities â€“ light which is then used to analyze a wide range of materials, even biological samples. Researchers at the facility work on topics as disparate as analyzing brain plaques from Alzheimer’s patients, to nanoscale electronics and environmental soil toxicity. The facility also hosts industrial research ranging from motor oil development to effective mine waste cleanup, and maintains ongoing research in accelerator and synchrotron engineering.

The light used in these experiments is generated using a large synchrotron. While cyclotrons like TRIUMF accelerate particles through solid electrodes, synchrotrons are circular accelerators that use extremely powerful electromagnets arranged around a vacuum tube to propel the particles. In the CLS, charged particles are accelerated to such high speeds (nearly the speed of light!) that they emit light at specific frequencies. This light is then focussed into beams and diverted out of the circular ring into a beam line. The facility currently has 11 beam lines, with three more under construction. 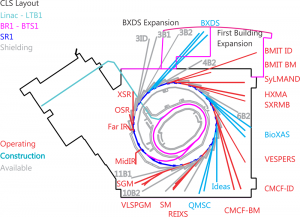 Each beam line is set up to accommodate a different range of frequencies and intensities of light, and is tailored for specific analytical techniques. For example, one group uses mid-infrared light (which has a longer wavelength than visible light) to study scar tissue from heart attack patients. Individual molecules vibrate differently when exposed to the infrared light, so researchers can determine the precise molecular composition of the scar tissue itself. This helps them better understand the physiology of how scar tissue forms and behaves in a patient after recovery.

Like TRIUMF, the CLS holds public tours. They also have lots of bilingual resources for high school educators, and a program to bring high school students onsite to run experiments. Follow the CLS on Twitter at @CanLightSource.

SNOLAB has nothing to do with that white stuff that everyone is getting so tired of this winter, but is the direct descendant of the Sudbury Neutrino Observatory (SNO), which closed in 2006. The facilities were expanded, and SNOLAB had its grand opening in 2012. SNO focused almost exclusively on neutrino research, a mandate continued by SNOLAB with the SNO+ experiment. It also houses experiments relating to dark matter and other astroparticle research, geophysics, and extremophile biology.

SNOLAB is situated in a mine shaft two kilometres below the earth’s surface, which is the key to its success. Neutrinos are nearly massless, very unreactive subatomic particles that stream from the sun in vast quantities: 1011 of them pass through a square centimetre each second. These elusive particles are the key to understanding the physics not only of the sun and other stars, but they play a critical role in the Standard Model of physics.

The principle experiments at both SNO and now SNOLAB look for incredibly rare events between neutrinos and other subatomic particles. SNO used a 12 meter diameter acrylic sphere filled with heavy water to detect neutrinos: when a neutrino interacted with an atom in the water, a small burst of energy would be detected with equipment mounted in the sphere. To detect this faint signal, the detector must be isolated from as much background radiation as possible. The earth’s crust serves as a giant filter, shielding the experiments from most solar radiation, but allowing neutrinos to easily pass through to the detectors.

SNO+, the flagship experiment in the facility, will use SNO’s original acrylic sphere, but will be filled with a benzene fluid rather than the original heavy water. This will allow SNO+ to detect events more easily and at lower energies. SNO+ is expected to start collecting data with the new fluid sometime this year. 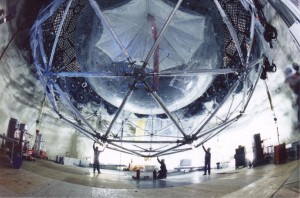 SNOLAB is located in an active mine, so unfortunately public tours are not available. They have run outreach courses in the past, and have some outreach videos online. Follow SNOLAB on Twitter at @SNOLABscience.

There are plenty of other collaborative physics facilities from coast to coast to coast â€“ there are far too many to exhaustively cover! It’s clear from both the breadth of research being done and the range of world-class facilities we’ve built to do that research that the spirit of collaboration and cooperation is strong within the Canadian physics community. Do you think your favourite facility was overlooked? Let us know in the comments, and we’ll cover it in a later post!

Out and about on the #cancomm web with physics and astronomy: