As a conservation biologist with the Nature Conservancy of Canada (NCC) in Fredericton, I spend each summer working in some of the most beautiful parts of New Brunswick and Prince Edward Island. One of my favourite areas in New Brunswick is Belleisle Bay, a long narrow branch of the Saint John River. Because NCC’s nature reserve in Belleisle Bay is on Hog Island, I have the great pleasure of canoeing to work! It was during trips to Hog Island that I had two wonderful encounters with monarch butterflies. 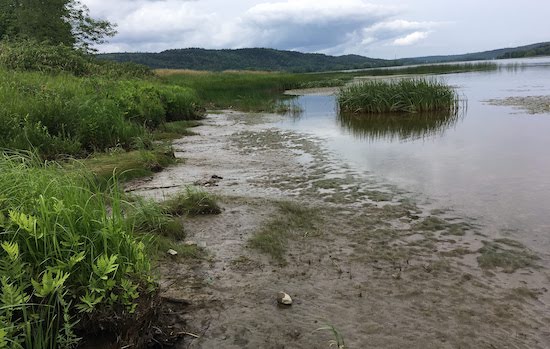 Hog Island is in New Brunswick farming country, and like other small maritime islands, it was likely used as a summer pasture for livestock. The island is in the lower part of the massive Saint John River basin and is flooded every spring after the snow melts. On my first visit there, I noticed plant debris hanging in the tree branches high above my head. On closer inspection, it turned out to be vegetation deposited by that year’s flood waters.

Although Hog Island has some trees, such as silver maple, white elm and white ash, it’s mainly a freshwater marsh that is covered in tall grasses and wildflowers, like swamp milkweed. My coworker and I arrived at Hog Island on a morning in July 2018, and the milkweed was in flower. Knowing that milkweed is a delicacy for many insects, we pulled our canoe up to shore to take a closer look. 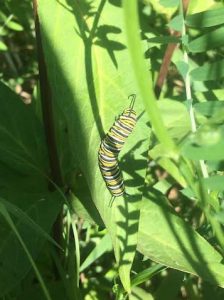 A monarch caterpillar on a milkweed plant; photo by NCC

As soon as we stepped out of the boat, we saw an incredible sight: a monarch caterpillar happily gorging on milkweed â€“ the only food these endangered caterpillars can eat! As we explored Hog Island further, we discovered more monarch caterpillars, more milkweed and several adult monarchs in flight.

Monarchs have one of the longest known insect migrations: they winter in Mexico, and in March they start breeding and fly north to lay eggs in the southern U.S. Successive generations migrate northward as far as southern Canada, before reversing their course again in the fall. On average, the journey spans four generations. 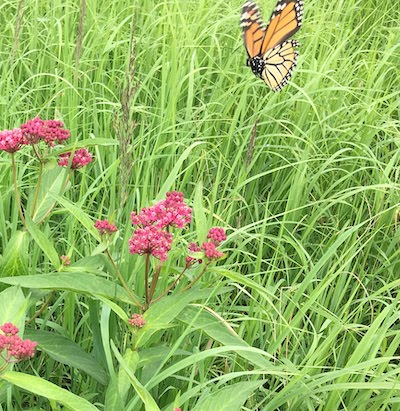 Swamp milkweed and monarch among the tall grasses and wildflowers at Hog Island; photo by NCC

In about two weeks’ time, the caterpillar I saw on Hog Island would likely become a super generation monarch butterfly, able make the entire journey to the Mexican home of its great-great-great grandparents to start the cycle over again. Sadly, over the last few decades, this delicate intergenerational migration has been affected by habitat loss, climate change and the loss of common milkweed on farms. Because of rapid population declines and continued threats, monarchs are now at risk of extinction.

This past summer, I returned to Hog Island and was delighted to discover that the monarchs had returned. Not only did I feel lucky to be in the presence of an at-risk species once again, I felt lucky to see evidence that my work and the work of my NCC colleagues is helping monarchs survive in our part of the world.

Allison Patrick is a conservation biologist who works out of the Nature Conservancy of Canada’s Fredericton office. She specializes in wetland ecosystems and birds of all types. She has a master’s of science in wildlife biology from Humboldt State University and an undergraduate degree in biology from Queen’s University.

A version of this post first appeared in Land Lines, the Nature Conservancy of Canada blog.