COVID-19 was the major villain of 2020. But another biological life form received a lot of press, as media speculation centred on bats as the origin of the virus.

Virus scientists found that SARS-CoV-2, the virus responsible for COVID-19, came from a virus in horseshoe bats, a species located in China and the surrounding region. It’s important to note that although the SARS-CoV-2 virus is similar to a virus found in this bat species, it does not mean that a horseshoe bat gave the virus directly to a human being. Researchers suggest that the virus moved from bats to pangolins, underwent a genetic change, and then moved onto people, although it is unclear how or where these transfers occurred. 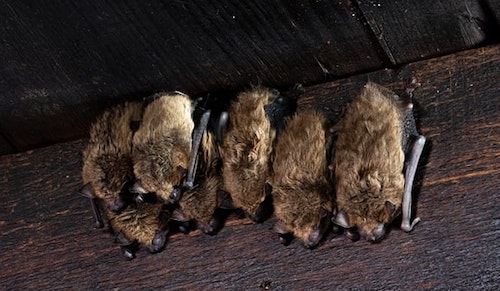 Although researchers think that the COVID-19 virus may have originated in bats in Asia, it remains unclear how or where the virus transferred between species. Image source: Jody Confer, on Unsplash.

Viruses can exist in bats without harming them. The bats shed the virus when they are unnaturally stressed, passing the disease to other species. Due to a lack of an inflammatory response that is a consequence of a simpler immune system, bats can contract viruses without being affected by them.

According to Dr. Cori Lausen, an associate conservation scientist with the Wildlife Conservation Society of Canada, “When a bat gets under a lot of stress, it puts stress onto their immune system…[and viruses will] start to replicate in the [bat’s] body and [the bat will] shed them. We do know that bats in high-stress environments would shed viruses.”

In western culture,  bats have traditional cultural associations with vampires and drinking blood. The link between bats and the pandemic hasn’t helped their image. Along with snakes and mice, bats are associated with self-reported phobias. This connection could be partly due to misrepresentations of bats or a bias to see them as scary or different.

Although bats carry many diseases, such as Ebola and SARS (SARS-COV), human contact and movement are partly to blame for the spread of such infections. And the rates of some diseases in bats, such as rabies, are lower than anticipated. The association of bats with the SARS-CoV-2 virus in Asia has resulted in a negative view of bats and bat deaths as Chinese citizens actively remove bats from their homes. Several regions, including China, are carrying out mass bat exterminations or culls because of COVID-19.

Around the world, bats play a significant role in the environment, pollinating flowers, dispersing seeds, and controlling insect populations. Canada is home to 19 bat species, with the greatest variety found in British Columbia.

Canadian bat species are facing many threats, including white-nose syndrome, a fungal infection which resembles a light, fluffy dusting of snow on the bats face, ears, and wings. The fungus occurs worldwide, infecting bat populations in Europe, Asia, and North America. The death rate is 90 to 100 per cent in some locations. White-nose syndrome leads to dehydration and starvation in hibernating bats, causing them to wake up and use their fat reserves. 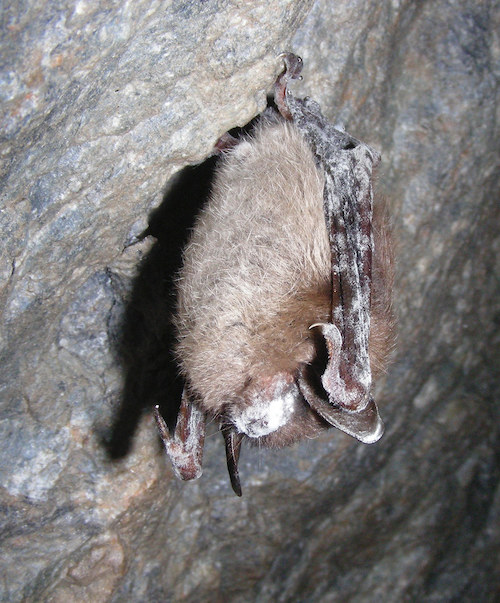 Pseudogymnoascus destructans, the fungus responsible for white-nose syndrome, is a death sentence for many bat species. The first-known case of the fungus in Canada was found in 2010. Image source: U.S. Fish and Wildlife Service – North East CC PDM 1.0

Half of the eight bat species found in Ontario have been listed as endangered since 2012, mostly due to white-nose syndrome, habitat loss, wind turbines, and slow reproduction.

Lausen says, “There’s an increasing number of threats to bats across the continent. White-nose syndrome is certainly taking [centre] stage and it has for a long time because it [is] quite visible…But there are so many other threats that are killing a lot of bats. [The threats are] very subtle and we don’t know how bats are ultimately dying… The populations are declining probably because of lower reproduction over time because of habitat loss.”

Determining changes in bat populations is difficult. Although small, bats are long-lived organisms, meaning they can live for a few decades. As a result, the impact of a low birth rate likely won’t be detected for years, making it hard to know how they are doing in the wild now.

Now for the big question, can you catch COVID-19 from bats in Canada?

According to Lausen and other sources, North American bats don’t carry the COVID-19 virus, and some species may even be susceptible to catching the virus from people. She says, “Here in North America, it’s a completely different set of [bat] species. They are evolutionarily very different from the horseshoe bat (the possible source of the virus).”

She points out that “we could spill [the coronavirus] back over to bats if we aren’t careful.”

Lausen encourages people to wear masks if they come into contact with a bat in their home. Not wearing a mask provides an opportunity for coronavirus transmission. If that occurs, the bat would be put down to minimize the risk of spreading the virus to susceptible bat populations.

“It’s not like you can catch COVID from a bat. But if you have COVID, you could give it to a bat and that’s where we want to be really, really careful.” she says.

Lausen wants to improve the public perception of bats, especially during the pandemic. A well-informed public will be less likely to remove bats from buildings and urban settings for fear of contracting COVID-19 from them. And we need to understand our role in this pandemic, the impact we have in transmitting the virus, and our responsibility to prevent further transmission.