When people think of chemistry, they generally picture scientists in sterile laboratories creating chemicals that have never been seen before – nothing much ‘natural’ about that. But if you read my last post for this blog, you’ll know that I have a hard time finding a qualitative difference between the chemicals found in nature and those made by humans. Both can be harmful or beneficial, depending on how they are used and in what quantities. In that sense, all chemistry is natural – that is, natural laws dictate what molecules we can and can’t make – and, in many cases, nature is a better chemist than we are.

Still, I feel the need to put “natural chemistry” in quotation marks; it’s descriptive, but it’s not the term commonly used by those who study it. Chemists talk about natural products chemistry, which is all about finding molecules in plants or animals that have some beneficial effect – usually a medical one – and then making copies and derivatives that could be developed into new drugs. Or we might refer to biomimicry, whereby humans try to solve their own problems by looking for the solutions – including chemical solutions – that nature has developed over millions of years of evolution.

In the past few weeks I’ve seen a number of great examples of both from the Canadian chemistry scene: 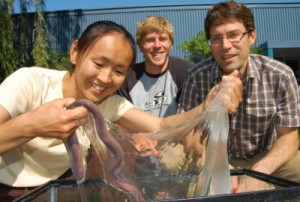 Douglas Fudge and his team investigate the chemical and physical properties of hagfish slime. [Photo by Andra Zommers, via Comparative Biology Lab website]

Douglas Fudge and his team at the University of Guelph have a research program dedicated to figuring out what’s in the disgusting slime produced as a defence mechanism by the hagfish, a primordial-looking creature that usually lurks at the bottom of the ocean. Specifically, they’re looking at protein molecules that are super-long and ultra-strong. Fudge describes them as comparable to a rope one centimetre in diameter and 1.5 kilometres long, that on a per-weight basis can be stronger than steel. If they could somehow be twisted into macro-scale fibers, they could be used in bulletproof vests or other structural materials. A few years ago Fudge’s team made a splash when they discovered a simple way to make films and fibers from the natural molecules, although this video shows that these didn’t turn out to be all that strong:

More recently, the team had papers in Nature Communications and the Journal of Experimental Biology describing how these protein ropes are coiled and how they expand when it’s time for the hagfish to produce slime. Here’s another cool video.

Over at the University of Alberta, Dan Sameoto and his team are inspired by gecko feet. Geckos sport pads that are sticky enough to allow them to walk upside down, yet not so sticky that the animal has trouble walking. The secret is the mushroom-like shape of tiny fibers on the gecko’s feet, which spread out and become attracted to surfaces. Sameoto’s team has been trying to replicate these structures for use on the robots that pick up and assemble microelectronic components in ultra-clean environments.

Most of the team’s previous attempts to imitate the pads used traditional plastics like polyurethane. But there’s a problem: molecule-sized pieces of the plastic can break off and stick to the electronic components, which would contaminate them and reduce their quality. In their most recent paper, published in ACS Applied Materials and Interfaces, the team describes a new set of pads made of block copolymers. These are long-chain molecules with sections that alternate between one type of block (e.g., styrene) and another (e.g., butylene). These materials are ‘cleaner’ because they don’t leave traces behind on the microelectronics. Thus, the smart phones and tablets of the future may be cheaper and more reliable thanks to the inspiration of a tropical lizard. 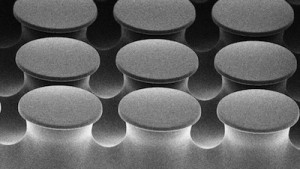 This scanning electron micrograph shows the microscopic polymer pads, each about 40 micrometres wide, used by engineers to mimic the structures on the feet of geckoes (Credit: Walid Khaled; used with permission).

Finally, Brent Sinclair and his team at Western University are studying goldenrod gall flies, whose larvae spend the winter inside lumps of tissue – called “galls” – that they form on the stalks of goldenrod plants. These larvae freeze solid during the winter, only to wake up each spring as though nothing has happened. Lab tests have shown that they’re able to survive temperatures down to -80Í’C, among the best cold tolerance in the animal kingdom. How do they do this? A new study in the Journal of Experimental Biology indicates that it could have something to do with the chemical composition of their fat.

An example of a triglyceride, the kind of fat found in many organisms: the left side is a glycerol molecule while the right side shows three long chain fatty acids. (If you’re curious, they’re palmitic acid, oleic acid and alpha-linolenic acid. Diagram by Wolfgang Schaefer (author) [Public domain], via Wikimedia Commons)

Most animals store fat in the form of triglycerides, which are basically three long-chain molecules attached to a single “cap” made of glycerol. Each of these chains can be broken down later for energy. But the gall flies use a form of fat (really more of an oil) that has only two chains, and the third slot is occupied by a small molecule called acetate. This fat/oil doesn’t contain as much energy as those with three complete chains, but it does have the distinct advantage of remaining liquid at temperatures that would cause ordinary triglycerides to solidify. This may help the gall flies keep their biochemical machinery going when they’re frozen solid all winter.

Good for those clever gall flies, I hear you say, but what does it mean for us humans? Well,for starters, fats and oils are used as biofuels. One of the things holding back their more widespread use is the fact that – unlike fossil-based fuels – they don’t do so well at low temperatures. If we could engineer a plant that makes lots of this cold-tolerant oil – and scientists are already working on that – we could perhaps develop a biofuel that would be suitable for airplanes that have to keep working in the freezing cold. More generally, understanding how bugs survive being frozen solid could help us develop new types of antifreezes that could keep cars and oil pipelines working in the frigid Canadian winter.

You may have noticed that these researchers aren’t all chemists, but they often have a chemist or chemical engineer on their team, and the techniques they use to figure out what nature is doing and to make copies of their own are chemical in nature. There are plenty of other examples; for instance, fellow Science Borealis contributor Marc Leger has written about mimicking the incredibly sensitive noses of dogs in order to detect a wider range of chemicals, from contaminants to explosives to biomarkers of diseases like cancer.

I hope these examples have convinced you that the dividing line between “natural chemistry” and “artificial chemistry” essentially arbitrary. Chemistry is all about finding the right molecule for the job, and whether it’s done by millions of years of evolution or a few smart people in a laboratory, the result is what matters.