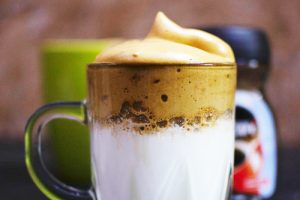 Dalgona coffee seems to have become a become a social media star during the COVID-19 restrictions. Photo by Bhupendra Singh, CC0, via Pexel

Canadians are stuck at home to limit the spread of COVID-19, and more and more of us are spending our time worshiping the gods of social media and following TikTok recipes. In these extraordinary times, Dalgona coffee has become a social media star. For those of you who don’t follow as many food bloggers as I do, this is a drink made by vigorously whipping or shaking together equal portions of water, sugar, and instant coffee and floating the resulting foam on some milk (hot or cold â€“ your choice).

Dalgona coffee is named after the South Korean street candy dalgona because it has a similar taste, colour, and texture, although there isn’t actually any dalgona candy in Dalgona coffee. Other cultures have their own variations on the drink, such as Greece’s frappÃ© and India’s beaten coffee.

The first time I saw a recipe for Dalgona coffee, I was surprised that such simple ingredients could form a solid foam because you don’t use any dairy products (such as cream) or egg whites. Then I realized I didn’t understand why those things could be whipped into foam either. I did some Googling, but the explanations I found for Dalgona coffee’s foam were too vague to provide a satisfactory answer and didn’t make sense to me. I developed a minor dalgona foam obsession. I wanted to understand, down to the microscopic level, why some things produce better (longer-lasting) foam than others. 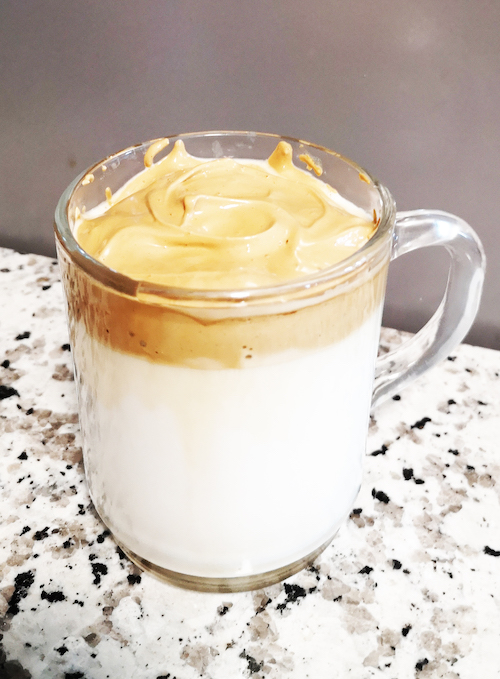 My attempt at making Dalgona coffee didn’t turn out as Insta-worthy as I had hoped. Photo by Joanie Tian.

Because the only ingredients are instant coffee, sugar, and water, the most obvious clue I had in solving the mystery of Dalgona coffee was that it required instant coffee because sugar and water on their own do not foam. I also found that certain brands of instant coffee, particularly the cheaper ones, foam up better than certain, often more expensive, ones. Then I found out that there are two types of instant coffee: spray-dried and freeze-dried.

Instant coffee is made by brewing and then dehydrating coffee. There are two dehydration processes. Spray-drying coffee involves spraying the coffee into hot and dry air which evaporates the water, leaving dried coffee particles. This method is more efficient and cost-effective than freeze-drying coffee, which involves deep-freezing concentrated coffee and then putting it through a low-pressure tube so that the frozen water in the coffee granules undergoes sublimation (i.e., it vaporizes). Freeze-drying coffee preserves more of the aromatic compounds and oils in the original coffee, which makes for a better-tasting end product.

Naturally, the next thing I wanted to know was why coffee oils prevent the coffee from foaming, and I found that the answer applies to making meringues as well.

The most basic meringue can be made by beating together sugar and egg whites, which are around 90 per cent water and 10 per cent protein. When proteins denature, they unfold and lose the ability to function. This can happen in a variety of ways. They can be denatured by physical force, such as the vigorous whipping involved in making a meringue, and by being exposed to air, which happens when air is whipped into the meringues. 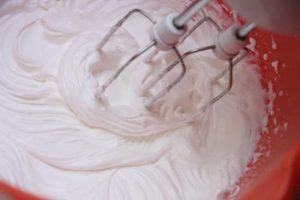 So how do egg whites turn into this? Whipping them enough will do it. Image source: Pikrepo, CC0

The denaturing of the proteins reveals their hydrophobic parts. These face the air in air bubbles, while the hydrophilic parts face the water surrounding the bubble. The denatured proteins bond to each other to form a structure that stabilizes the air pockets into foam.

Oils, which exist in egg yolk, can destabilize this balance by interrupting the structure formed by the proteins around the bubble. This weakens the walls of the bubble, making it more likely to pop. Brewed coffee contains proteins and other amphiphilic compounds. It also contains oils, which is why it’s much harder to make Dalgona coffee out of regular coffee or whip up meringues with oily equipment, although both are possible.

The final component worth mentioning in Dalgona coffee is the sugar. Water is denser than air, so gravity will always be pulling the bubbles’ watery walls downwards while the air in the bubbles wants to rise above the water. The sugar increases the viscosity of the water so that it drains more slowly and increases the stability of the bubble walls, making the foam last longer. But Dalgona coffee, like meringues, can be made without sugar. The coffee foam will just be darker and collapse faster than the sugary version.

I hope that understanding the mechanisms behind making Dalgona coffee inspires you to experiment with it and that you become more curious about the science behind other everyday reactions that we take for granted.

5 thoughts on “Dalgona coffee explained: The science behind why instant coffee foams”