Our lungs face a never-ending battle. With every breath, we inhale millions of airborne particles, including many that are potentially harmful. Our bodies must be prepared to defend us from these invaders. Most of us are equipped with immune systems comprised of an army of specialized cells for this particular task, but the specific roles of these defensive cells remain unclear. Uncovering the mechanisms of each rank within the “immune army” is key to understanding the process of disease and developing new prevention methods and treatments.

Dr. Gurpreet Aulakh, assistant professor and Fedoruk Chair for Nuclear Imaging at the University of Saskatchewan’sWestern College of Veterinary Medicine (WCVM), is researching how the mammalian immune system responds to both infectious and sterile lung injuries â€“ injuries caused by toxins or chemicals rather than bacteria or viruses.

“There is no more direct way of understanding this than [through] imaging,” she says as she directs her students through several advanced imaging processes. Aulakh hopes that together, the varying views produced by these methods correspond to tell a detailed story of what happens during lung offence by bacteria compared to sterile ozone. 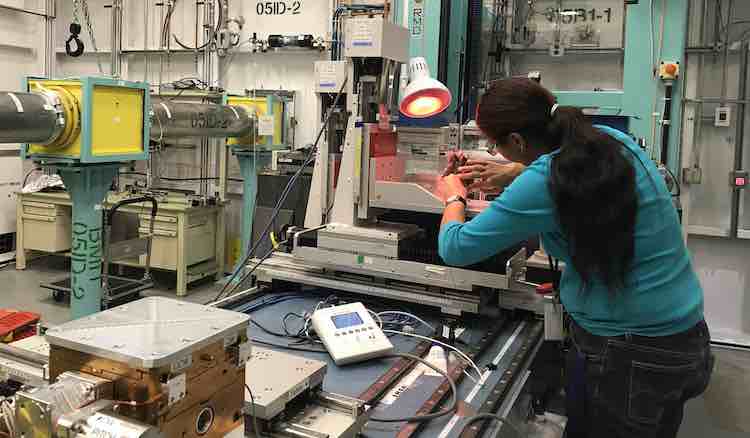 Dr. Gurpreet Aulakh arranges live, anaesthetized mice for imaging, placing them within the line of the synchrotron beam for multiple image radiography at the Canadian Light Source.

Ozone is a common air pollutant. When inhaled, it causes living cells to rupture and die. This, in turn, triggers an inflammatory immune response; however, unlike an infection, no bacteria or viruses are present, and the inflammation cannot be resolved with antibiotics. Ozone is produced by radiation or whenever a spark is ignited, including when machines are turned on and when lightning strikes. It is in all of the air we breathe; however, concentrations fluctuate. During thunderstorms and on hot days, for example, ozone levels are generally higher than on calm, cool days. Although most of us don’t notice any changes to our bodies during greater exposure, people and animals with respiratory diseases or who are immunocompromised are at greater risk of suffering from a variety of ozone-related health issues, such as coughing, throat irritation, and chest pains caused by tissue damage and airway inflammation.

Aulakh’s research team is seeking to visually capture and compare the inflammatory processes caused by both infectious and sterile lung injuries. The team’s goal is to better understand the roles of various immune components to add to our current knowledge of lung stress and immune response in animals and people. They hope this knowledge leads to the development of new treatment options, especially for sterile lung injuries that currently have no pharmaceutical treatments.

When bacteria or viruses infect lung tissues, the patient’s immune system sends its ‘first responders’ â€“ neutrophils â€“ to engulf and neutralize the threat. Neutrophils then call for backup by sending various chemical signals to other immune cells in the body to gather, or aggregate, at the infection site. Some neutrophil signals are well-studied and our knowledge of them has increased our understanding of infections and how to treat them.

Other important signalling patterns in the inflammatory process, however, are not so well understood, for example, clot resorption signalling. The cells recruited by neutrophils form small clots in the blood vessels surrounding the infection. They remove the infection and damaged cells, allowing healthy lung tissue to repair and remodel itself. The clot then receives a signal to break down and is resorbed, enabling lung tissues to regain respiratory function. If the signalling doesn’t occur and the clot is not resorbed, scar tissue forms and the infected tissue loses function. This happens in many chronic lung diseases, including chronic obstructive pulmonary disease, and interstitial fibrotic lung disease.

Neutrophils respond to ozone and other sterile injuries, similarly but not identically to infections. “Under infection, we know that the neutrophils take care of the bug[s],” Aulakh says. “But under sterile conditions, what all do those neutrophils do?”

Unlike bacterial infections, ozone and other sterile air pollutants cannot be fought with antibiotics to alleviate inflammation. Working with ozone and determining how animal bodies respond to sterile lung injury will provide the groundwork to developing methods for clearing and improving the immune response to sterile insults.

Overall, Aulakh hopes to reveal where defensive cells are summoned from and by which chemical signals. This is challenging to observe since the inflammatory process is a full-body response that recruits cells from all over the body via the blood system. 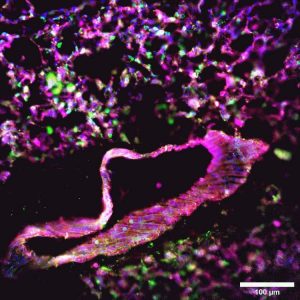 Immunofluorescent image of cells within a slice of lung tissue forming a bronchiole (the ring) and the supporting alveoli.

To find answers, Aulakh has focused her efforts on establishing new imaging techniques to better visualize the lungs with respect to body systems.

One technique that Aulakh’s team uses to image the lungs is immunofluorescence confocal microscopy, which reveals the types of cells present and where they express certain proteins. Slices of the injured lung are stained with fluorescent antibodies that bind to the proteins in question, which then glow to reveal where the proteins are expressed. The colourful images produced from a slide can be stacked to create a three-dimensional view of the cells and their respective proteins. 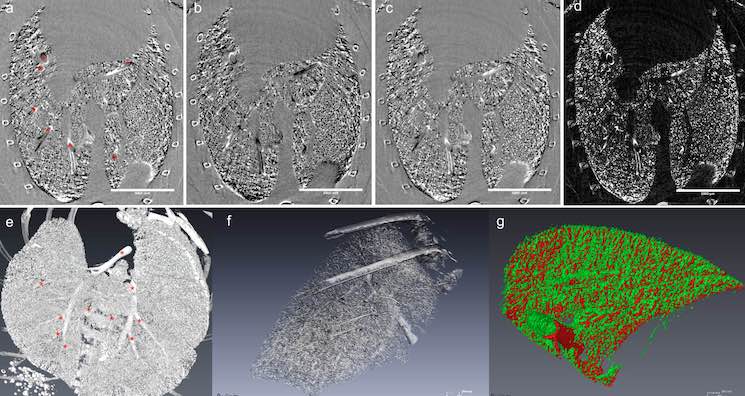 Images visualize damage in the lungs with high resolution. These images were produced by multiple-image radiography (MIR) using the synchrotron at the Canadian Light Source.

The team also uses multiple-image radiography (MIR; a type of phase contrast imaging) in combination with contrast-enhanced computed tomography (CT) using synchrotron imaging to visualize damage in the lungs at high resolution. MIR takes high-quality X-rays at two angles to analyze changes in tissue density while CT stacks the data together to produce a three-dimensional image.

Computed tomography (CT) and single photon emission computed tomography images produced to analyze tissue metabolism in the whole-body based on radioactive tracer uptake to identify areas of disease and inflammation.

Each technology provides a unique window into lung biology at different stages of the inflammatory response, which is necessary to uncover the full story on lung inflammation. Aulakh’s work will lead to better methods of treatment and therapy for animals and humans alike â€“ particularly those vulnerable to or suffering from lung disease.

Western College of Veterinary Medicine student Vanessa Brown wrote this post as part of Science Borealis’s Summer 2019 Pitch & Polish, a mentorship program that pairs students with one of our experienced editors to produce a polished piece of science writing.