Previous blog posts have discussed how small songbirds and big brown bats survive the winter. Those blogs briefly covered some strategies used by birds and mammals. But what about amphibians? How do frogs survive the many months of sub-zero temperatures?

Amphibians are ectotherms (or cold-blooded, meaning that their body temperature is regulated by the environment rather than internally), which use both aquatic and land-based habitats, and include frogs, salamanders and caecilians (limbless, snake-like amphibians).

Saskatchewan has eight species of amphibians, including seven species of frogs and toads and one species of salamander. Unlike many birds and mammals that migrate, amphibians are unable to migrate and must hibernate to survive cold temperatures and lack of food during winter. Amphibians have a couple of different hibernation strategies. 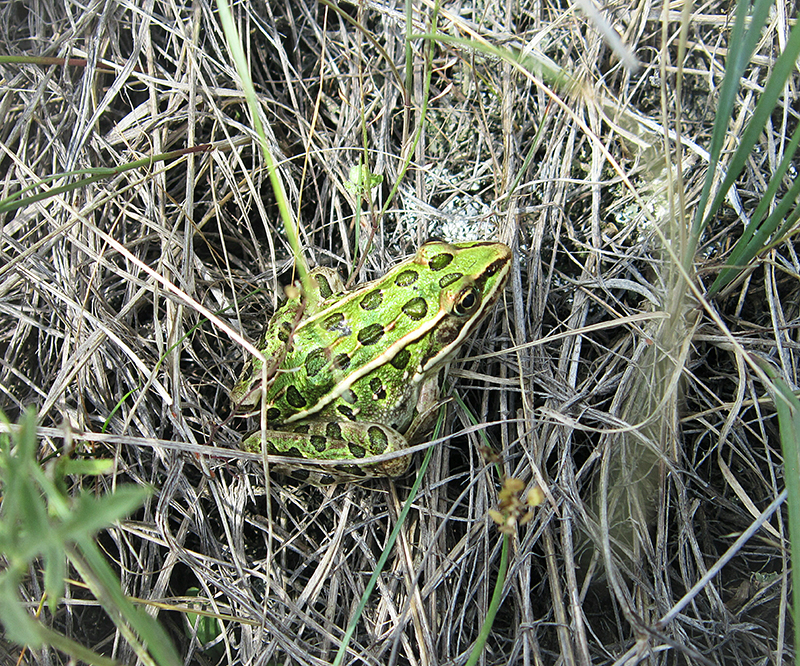 Northern leopard frogs are two to four inches long and are green or brown with dark spots that are surrounded by a light halo. The species is widely distributed across North America; however, it experienced large-scale population declines in the 1970s, with the population in western Canada experiencing the greatest declines. Northern leopard frogs are federally listed as special concern in Canada.

Northern leopard frogs hibernate underwater. But not just any pond will do―the water must have sufficient dissolved oxygen and not freeze all the way to the bottom. So how do northern leopard frogs survive all winter underwater? Northern leopard frogs are able to breathe through their skin ― oxygen and carbon dioxide pass through their skin by diffusion, which is why water in the overwintering pond needs to have lots of dissolved oxygen. The frogs typically sit very still on the bottom of the pond (to avoid being a tasty snack to any fish present) and may partially bury themselves in the mud, making sure to keep their backs exposed so they can “breathe.” 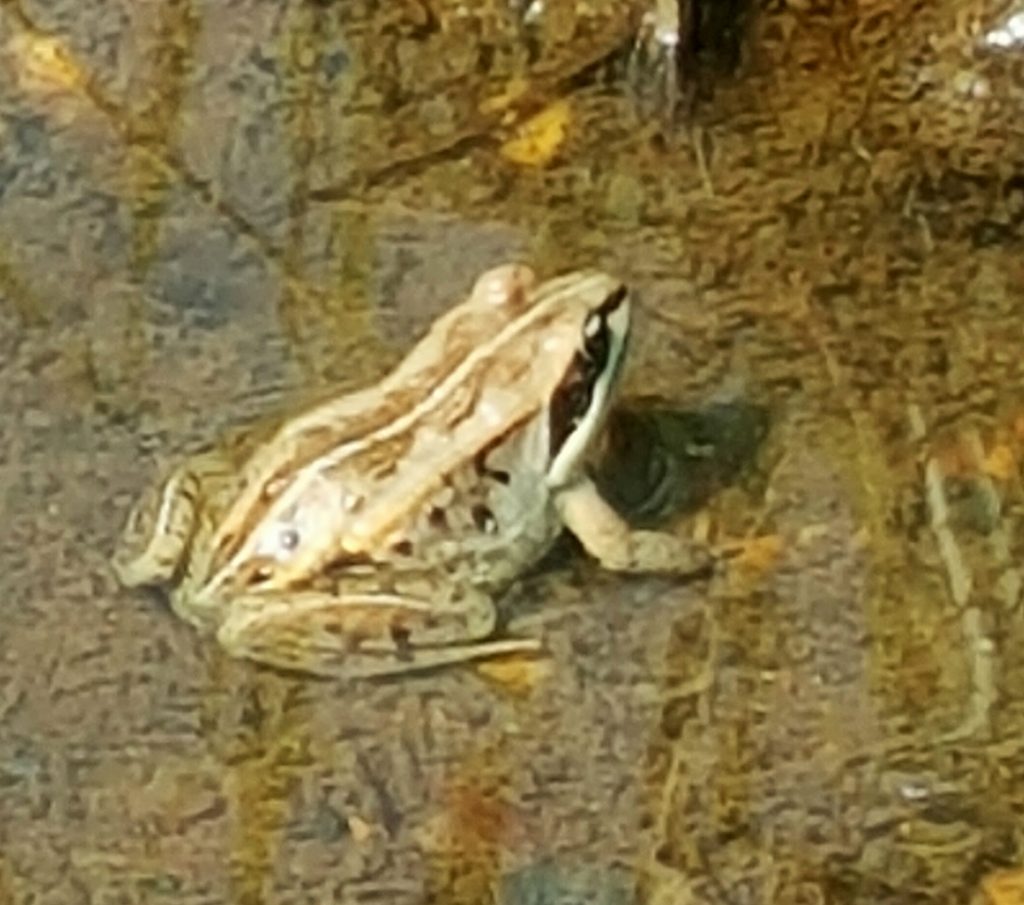 Wood frogs are two inches long and distinguished by a black mask that extends from their eyes to their jawline. The species inhabits forests across Canada and the eastern United States and can even be found north of the Arctic Circle.

Rather than finding a cozy spot in the mud at the bottom of a waterbody, wood frogs find a crevice in a log or a thick pile of leaves and settle in to hibernate. Most animals that hibernate have warm fur or find a well-insulated spot to wait out the winter and although their body temperature drops, it remains above freezing. Wood frogs do not have warm fur (fun fact: only mammals have hair), and a crevice in a log or a pile of leaves hardly seems like enough insulation to prevent the frog from freezing. The wood frog, however, has a secret weapon—antifreeze! Wood frogs freeze and thaw with their environment.

So how do they do it? First of all, they don’t actually freeze solid—only about 65 per cent of the frog’s body freezes. As the temperature drops, ice crystals begin to form and the frog’s skin freezes. Frozen skin in humans is called frostbite; when severe, it completely kills tissue. The reason for this is that water in the human body freezes and forms ice crystals, which suck all the moisture out of our cells and the cells then collapse and break.

Wood frogs have special proteins in their blood that cause the water in their blood to freeze first and form ice, which sucks most of the water out of the frog’s cells. At the same time that this is happening, the frog’s liver begins producing large amounts of glucose (i.e. sugar), which gets pumped into its cells to help them maintain their structure. So, rather than having cells full of ice (which would be fatal, both for the cells and the animal), the frog has shrunken cells that are full of sugar. The wood frog is in a state of suspended animation. Its heart has stopped beating and it has stopped breathing; however, once spring and warmer temperatures arrive, the ice in their bodies thaws and water flows back into their cells, their hearts start beating again and the frog slowly reanimates to continue on like it’s no big deal that they were literally frozen for months.

Frogs have some of the coolest adaptations for hibernation within the animal kingdom—antifreeze in their blood and the ability to breathe through their skin. Nature never ceases to amaze me. I am continually impressed by the adaptations that creatures have to survive, which is not an easy thing to do when it’s winter on the prairies.