“Science is about the pursuit of knowledge and understanding the nature of reality. But there are different ways of seeing, different ways of knowing reality. It’s time to recognize the blessing of having different sciences and to invite them together under one tent to dialogue.”

Coyote’s Crazy Smart Science Show is a half-hour TV show aimed at Indigenous youth aged 9 to 13, but its thoughtful multimedia approach to exploring science should interest everyone. The show’s goal to inspire Indigenous youth to learn about math and science informs everything about its content, choice of performers, and production.

We spoke to Loretta Todd, who is MÃ©tisâ€“Cree and the creator of the show. The filmmaker shared the insights and experiences she gained making the program. 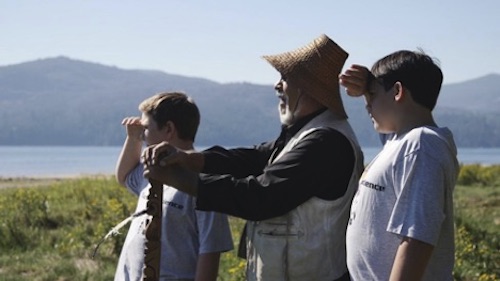 Science Questers with an elder; image courtesy of Loretta Todd

Regular segments in each episode include conversations with scientists or elders and interludes with Indigenous musicians and artists. Chickasaw astronaut John Herrington hosts Where in the World is John Herrington?, a segment highlighting the natural science knowledge of Indigenous cultures. MÃ©tis, Cree, German, and Norwegian teenager Kai hosts a segment called Hack This!, where he uses fun and easy hands-on projects to draw the viewers into science.

The show’s segmented nature began as a practical solution. Loretta’s mentor advised her that a show consisting of short segments would be easier and cheaper to create than one consisting of a single big arc. This structure also allows for a range of perspectives on a single theme or concept. 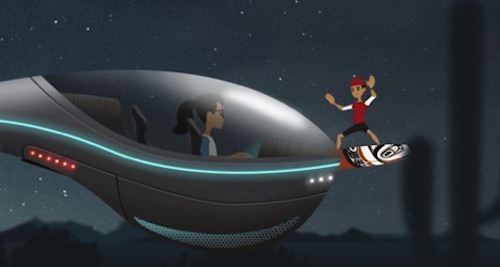 Indigenous youth called Science Questers walk viewers through the segments of the show, posing questions to elders or performing experiments as they explore the episode’s theme. “There’s a whole thing, particularly around in Cree culture, where you don’t tell people what to do, what to think. You always bring people into your experience by your own modelling of it,” says Loretta. With young Indigenous models guiding the live segments, viewers are more likely to see themselves doing science.

The show offers an eye-popping variety of presentation styles, both live-action and animated. During her research on effective educational television for children, Loretta found that “most kids like surprises, so you create programming with lots of surprises.” Animations also include elements of Indigenous design, bringing cultural imagery to the screen. 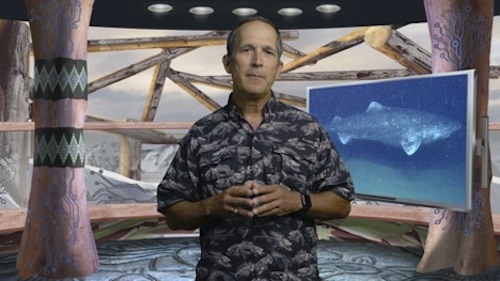 The show’s take-home message is that Indigenous science is awesome â€“ but what is it, exactly?

However, Indigenous science has not always been well received by academia. “Dr. Little Bear, Amethyst First Rider, and Dr. Lorna Williams worked for many years, even when there was resistance within the academic world – that somehow we didn’t have Indigenous science, that it’s just folklore…or it’s just environmentalism,” says Loretta. “That was the category… It was never seen as full-on science.” 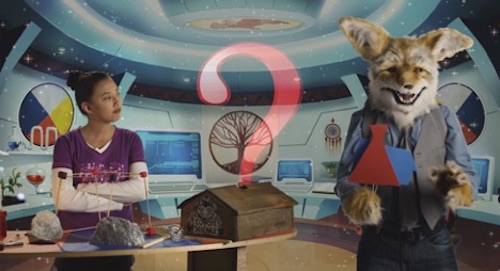 While mainstream education has dismissed Indigenous science in the past, Coyote Science represents promising progress, showing young people that they, and their Indigenous knowledge, have a place in science, technology, engineering and mathematics (STEM). As Loretta says, “[Leroy, Amethyst and Lorna] laid that groundwork and now you’re seeing Indigenous science being brought into the classroom and you’re seeing science reaching out.”

On Coyote Science, storytelling complements scientific information by building an awareness of the consequences of actions. “If you look at Indigenous storytelling, the stories go around this idea…if [people] overhunt or they overfish or they over-gather…[if they take] more than the local environment can sustain, then it has an effect,” says Loretta. “Storytelling helps lead to a more comprehensive understanding of the world and our role in it, making it second nature to ask: ‘Is what we’re doing wise? Is this good?’” 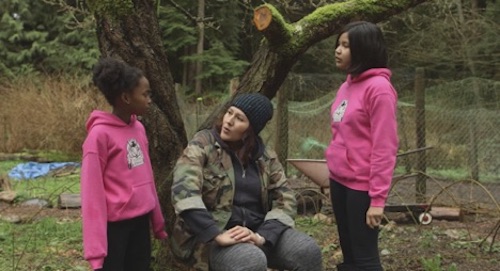 Each season of Coyote Science has taken a different approach. The first season featured a costumed Coyote, a trickster character, who presented riddles for the young Science Questers to explore. Loretta says, “One of the principles of Indigenous science is the idea that everything is in flux….[and] tricksters exemplify that idea of flux.” Coyote is “also a teacher, although he’s a flawed teacher.” After posing a riddle, he leaves its unravelling to the Science Questers, confident that he knows the answer. However, the Science Questers find their own answers and Coyote must shed his ego to accept they are right.

The second season kept the mischievous and playful spirit of Coyote, but showed less of the costumed character as episodes explored themes related to a sense of place, such as the ocean or underground. With the absence of Coyote, youth host Isa played a larger role, demonstrating her natural aptitude for presenting Indigenous science.

In its upcoming and possibly final season, Coyote Science is diving into technology. According to Loretta, Season 3 aims to encourage Indigenous youth to learn how to use and influence technology, and how to access tech-related opportunities, to bring “more Indigenous values into the use and development of tech.” 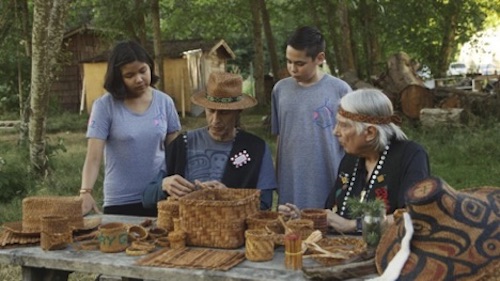 Isa and the team of Science Questers all have Indigenous roots. Loretta is keen that the show reflects its Indigenous youth audience as a matter of principle and effectiveness, “to give [our] kids… the opportunity to be in front of the camera, to have that excitement and embolden their confidence.”

Loretta felt it was important to “let our kids see themselves in science and in math and in technology so they would see…that’s a safe place they can be, that they’re welcome and that they can bring their knowledge to it.” Indigenous youth may sometimes feel that “Western science is for white people,” but Coyote Science emphasizes “this [science] is something that belongs to them, something that comes from centuries and centuries of learned experience and of knowledge and of transmission.” 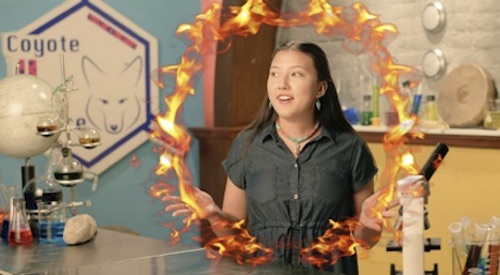 Behind the scenes, Loretta works to provide paying opportunities for local Indigenous media creators. Employing an Indigenous crew also provides a more comfortable and supportive experience for the youth presenters, which in turn results in a more appealing show.

The future of Coyote Science on TV may be uncertain, but Loretta mentioned the possibility of a comic book series to uphold its legacy. Whatever happens with Coyote Science, one thing’s for sure: we want to see more Indigenous science!