Science, technology, engineering, and mathematics (STEM) have a gender diversity issue. The professional pipeline, stretching from high school and undergraduate university through graduate school to post-doctoral fellowships and positions in academia, leaks. Especially at the early career stage, a higher proportion of women (cis gender, transgender, asexual, heterosexual, bisexual, lesbian, white, of colour, disabled) than men leave STEM. The 2015 UNESCO Science Report: Towards 2030 reported that 43 per cent of Ph.D. STEM graduates are women. However, only 28 per cent of the world’s researchers are women, which suggests that a higher proportion of women are not transitioning into academic research positions.

The traditionally male-dominated academic fields of STEM create an environment that fosters gender inequality. Some of the factors forcing women out of an academic STEM career include gender bias in research funding and gender pay inequity.

According to Leigh Paulseth, a Science Outreach and Enrichment Coordinator at Ryerson University, “We lose female researchers as we step up into higher echelons of academia. It is not because they are not interested in pursuing those roles; it is because they are pushed out.” 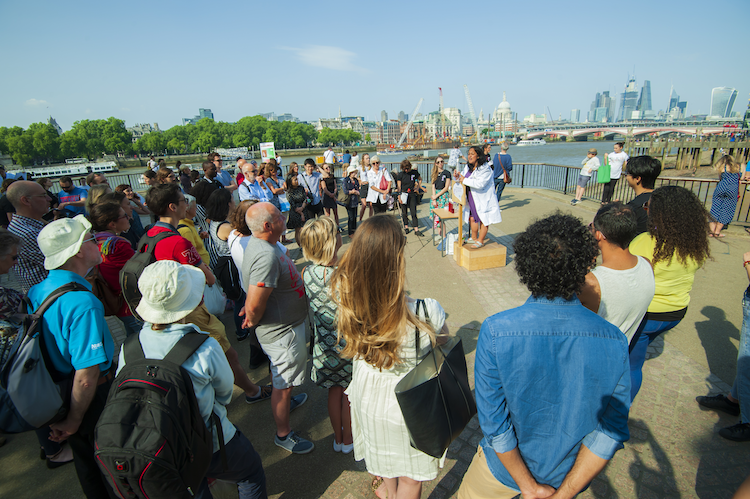 People in London, U.K., gather to listen to a Soapbox scientist at a live event in 2018; photo courtesy of Isla Watton, Soapbox Science.

Soapboxes, lightweight wooden crates used to ship dry goods before the advent of cardboard boxes, were once used as makeshift platforms for street-corner speakers. Soapbox Science has adapted this idea to give women scientists a platform to share their research. During Soapbox Science events, the public meets these scientists outside of a laboratory or research setting and gets a snapshot of their research.

In 2011, London, U.K., hosted the first Soapbox Science event. The speakers set up their soapbox platform in a designated area where the public could pass by for their one-hour session.

During these sessions, which ran concurrently, the speakers each gave a short, interactive presentation about their cutting-edge research, using props such as a model of the brain or images of volcanoes to capture the audience’s attention. Audience members of all ages could wander about freely and either listen to one speaker for a few minutes or stay for the entire session and ask questions at the end.

In the nine years since the first event, Soapbox Science has become an international phenomenon. Australia, Canada, Germany, Ireland, Sweden, Tanzania, and the U.S. have hosted events.

The 2020 Toronto Soapbox Science event was scheduled for September 27 at Queen’s Quay and Dundas Square. However, due to the pandemic, the organizers had to switch to a virtual platform called Hopin.

A virtual Soapbox Science event has a different dynamic to a live event. Instead of attracting audience members who are just passing by, people sign up for the virtual event because they have heard about it beforehand or were invited.

“[Speakers] are not trying to cajole people off the street to come and listen. [Speakers] have a dedicated audience who have signed up [and] shown interest in [the event],” Paulseth says.

The virtual event was held on November 18â€“19, 2020 and included eight speakers who shared their research on topics varying from diabetes to science communication training. The two-day event included presenters at many different career stages, from doctoral students to faculty members. Any Ph.D. student or faculty member from any STEM field at any university within the Greater Toronto area could apply to be a speaker by submitting an application consisting of short answer questions. Once the speakers were selected, they went through multiple training sessions with a former Soapbox Science Speaker and the organizers.

Every year, 12 speakers are selected; however, because this year’s event was virtual, the participants were offered the opportunity to defer their participation to next year, when it is hoped the event will be live.

“A number of the speakers deferred for a number of different reasons, but I think signing up for a virtual event is very different from an in-person event,” says Paulseth. “We wanted to make sure that we gave our speakers the choice.”

In the end, only eight speakers gave a talk at the event in November 2020.

Leanne De Souza-Kenney, an assistant professor in the Department of Human Biology and Health Studies at the University of Toronto, was one of this year’s speakers. As a science outreach advocate, De Souza-Kenney applied to be a Soapbox scientist because the event provided an opportunity to fulfill her unspoken duty as a public health scientist to share her knowledge with non-experts.

“I wanted to be part of an event that cared about science and elevating female voices in science,” she says. “I personally felt like it was my duty to pursue [Soapbox Science] so there is a representation of women of colour in science. Seeing is believing, and people need to see women in science.”

De Souza-Kenney emphasized that she wants the audience to remember that knowledge is power. People make decisions for their health based on information, so they are their own best advocates. In that way, everyone is a scientist, so science should be accessible.

For Kirthega Jeevanathan, a second-year student in the Occupational Health and Safety program at Ryerson University and a student representative of Ryerson’s Association of Undergraduate Women in Science, being a part of the Soapbox Science Toronto organizing team had a profound effect on her career plans.

“I wanted to pursue post-grad [but] I was not confident enough and unsure. After organizing and seeing the Soapbox Science [event], I got to see the amazing work of female scientists,” she says. “I would love to come back to Soapbox Science as a speaker and motivate and encourage other women in STEM fields.”

From 2017 to 2019, the Soapbox Science Toronto live events attracted about 1,000 attendees annually. The 2020 virtual event had 130 attendees, with people tuning in from eight countries â€“ Canada, the U.S., the U.K., Brazil, Nigeria, India, Iran, and Qatar.

Whether through in-person or virtual events, Soapbox Science will continue to provide women scientists with a platform to share their research with the broader community.