You prefer to get up at dawn and are raring to go by the time most people are just rolling out of bed. This means that you are in bed by 10 P.M. But your new neighbours are up half the night moving around their apartment, disrupting your sleep â€“ your body clocks are not in sync.

During the recent COVID-19 lockdowns, 52 per cent of 18â€“29 year-olds were living with their parents, and people were spending more time at home, creating all kinds of body clock conflicts. The new reality of virtual school and business also allows for more flexible schedules, freeing many from the restrictions of the prescribed ‘9 to 5’ and allowing natural variations in down-time to become more pronounced.

Research by Dr. David Samson, a sleep scientist at the University of Toronto Mississauga, explores the evolutionary origins of sleep pattern variation. Our varied preferred bedtimes (or chronotypes) may be a vestige of a survival mechanism that kept our ancestors safe at night.

What exactly is a chronotype, and why are some people prone to staying up late?

A chronotype is an individual’s propensity to sleep at a given time. This propensity manifests as either eveningness or morningness â€“ what we call nights owls and early birds, respectively.

Statistically speaking, chronotypes are normally distributed and correlated to both age and sex. Men show a greater tendency towards eveningness than women, but these differences disappear around age 50. This change coincides with the onset of menopause, suggesting a link between chronotype and changes in the endocrine system. Generally, adolescents are the latest chronotypes in society, reaching a peak in lateness around 20 years of age.

The greatest lifetime shift in bedtime is between 15 and 25 years old, with people becoming earlier risers as they age. Researchers propose that this behaviour change is a marker for the end of adolescence, with hormone changes affecting circadian rhythm.

These are general trends, and even within age groups, chronotypes are still normally distributed, although there is less variability among older age groups. So, older night owls or young early birds certainly exist.

Modern society favours early risers, and night owls are perpetually encouraged to change their ways and embrace the morning light. But can someone really control their chronotype? Studies of twins show that chronotype is moderately to highly heritable (40%â€“72%). Your chronotype is also linked to circadian clock genes such as the CRY1 and PERIOD genes. Chronotypes also correlate with sleep onset markers such as low core body temperature, melatonin secretion, and cortisol levels. So, there certainly is a significant genetic component at play, making it difficult for someone to force themselves to adapt to an earlier chronotype.

Night owls often suffer the consequences of a culture that favours early risers.
Photo by Marcus Aurelius, CC0, via Pexels

But why did we develop such variable bedtimes? How might this have provided an evolutionary benefit to human beings? Samson’s research sheds some light on these questions.

Night owls and early birds protect each other

Psychologist Frederick Snyder introduced the sentinel hypothesis in 1966. He proposed that animals learned that it was only safe to sleep with sentinels posted to remain vigilant and watch over the group. Samson and colleagues studied the mechanics of this hypothesis in humans. They found that humans did not intentionally post sentinels to keep guard at night but relied on chronotype variation to drive sentinel-like behaviour. They recruited and studied the Hadza people, a group of hunter-gatherers in rural Tanzania. They are one of the few remaining societies whose lifestyle approximates our ancestors. 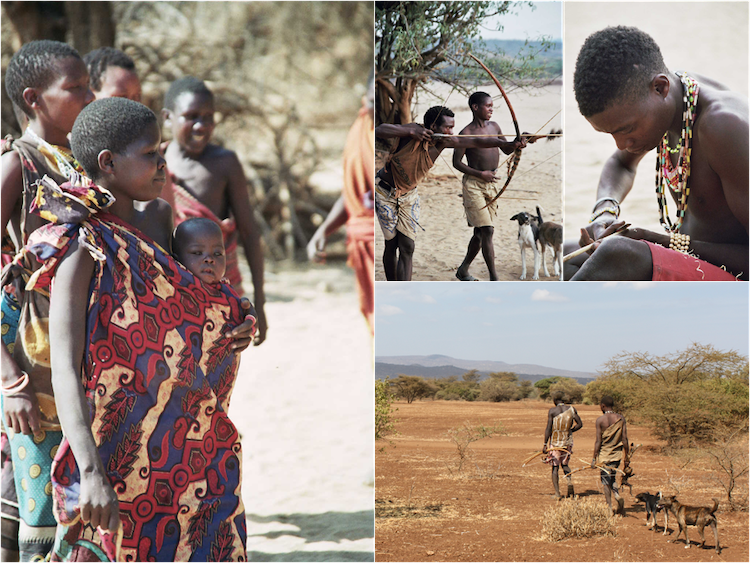 The Hadza people in rural Tanzania live by a flexible schedule and have varied chronotypes. Photos by Joey Roe, CC BY-SA 3.0

Thirty-three adult members of the group wore actigraphs â€“ watch-like devices which measure subtle body movements that correspond with wakefulness. Amazingly, during 20 nights, all individuals were simultaneously asleep for only 18 minutes. Individual mean sleep-time was about 6.5 hours, but group sleep-time was about 12 hours from the first person falling asleep to the last person waking-up. This 12-hour period accounted for the entire period of darkness. Someone was always awake, keeping watch over the group.

The researchers also found a link between chronotype and age, with older Hadza tending towards morningness. They proposed the poorly sleeping grandparent hypothesis, which states mixed-age populations in ancestral groups would have had a protective effect on the entire group by facilitating sentinel-like behaviour during the night.

The researchers propose that the selection pressure for different chronotypes comes from the advantages accrued at the individual level. If you are awake while everyone else is asleep and a lion attacks your camp, you could have an advantage over those who are resting, possibly reducing your mortality.

We usually look at deviations from what is considered normal sleep patterns as disorders. Samson’s research implies that night owls’ behaviour could simply be due to an evolutionary mismatch, meaning our bodies are wired for how things were and not how they are now.

Sleep is vital for physical and mental health. It is when we consolidate memory and process learning. In a culture favouring morningness, night owls get the short end of the stick and struggle to achieve the full benefits of a good night’s sleep.

We should strive to implement more flexibility because, as the research shows, chronotypes are not controllable. In schools, later start times are associated with more sleep, higher energy levels, and better academic performance in high school students. In workplaces, when employees have more control over work hours, they report better sleep. The general principles of flexible work that we had adopted during the pandemic lockdown could be carried into the future, allowing everyone to get a good night’s sleep.