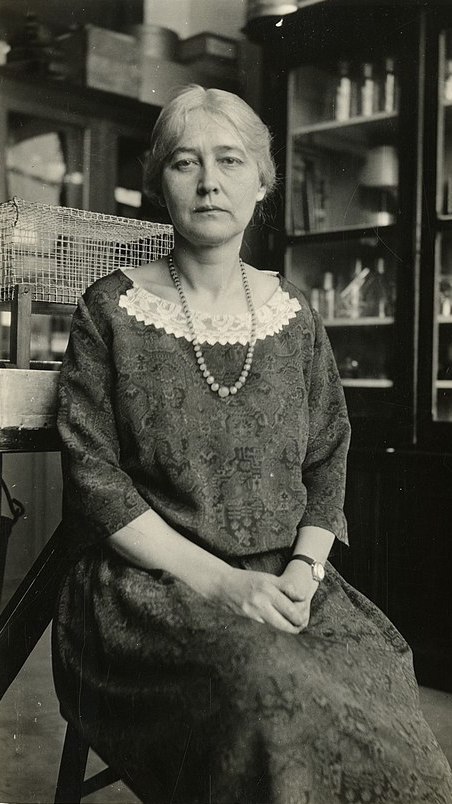 Maud Leonora Menten’s early work with Leonor Michaelis in Berlin led to the development of the Michaelisâ€“Menten equation, which describes the behaviour of invertase and is fundamental to understanding in biochemistry and proteomics. Photo: Smithsonian Institution @ Flickr Commons

Few people will recognise the Canadian in the photo here. She was a talented painter whose work was exhibited in galleries, a gifted linguist, speaking English, French, German, Italian, Russian, and Halkomelem (a British Columbia First Nations language), an inspiring teacher, a diligent pathologist, and, above all, a passionate scientist.

Maud Menton’s contributions to science are numerous and her advances in medicine landed her in the Canadian Medical Hall of Fame. Not only was she the first Canadian woman to earn a medical doctorate (M.D. University of Toronto, 1911), she also completed a PhD in biochemistry (University of Chicago 1916). She became a hospital pathologist in the University of Pittsburgh School of Medicine, while continuing to contribute to biochemistry through her scientific publications over the next 40 years. It is her work in biochemistry, specifically the field of proteomics, that’s presented here.

To understand the impact of Menten’s work, we first have to understand the breadth of this field. Proteomics is the study of proteins. Proteins are tiny chemical machines and there are thousands of them in each human cell. Scientists estimate that our bodies contain somewhere between 10,000 to several billion different types of proteins!

Proteins have many different functions including: (1) carrying other chemicals (transport proteins, like the haemoglobin that carries oxygen in the blood); (2) using energy to enable movement (motor proteins, like the actin and myosin in our muscles); and (3) speeding up the conversion of one chemical into something else (enzymes, like lactase which allows us to digest sugars in milk, and when absent, results in lactose intolerance). There are other important things in our cells too, but even the non-protein parts of us either rely on these machines or work together to make more of them. Humans are giant protein-machine-making factories in which proteins are constantly making more proteins.

Menten provided us with the tools to understand the many different proteins within our bodies. To understand what proteins do, scientists ask a few important questions: Where are proteins located? What do they look like (in biology structure denotes function – the shape of a key determines what lock it opens)? What other chemicals in our bodies do proteins interact with? How long do these interactions last and how tight are the protein’s connections with the other chemicals? Menten gave us the tools to tackle these questions, and derivations of her tools are still used today in labs around the world.

Menten’s first major contribution to the field was an insight into the way a protein interacts with its environment. Shortly after completing her medical doctorate and before embarking on her PhD, Menten worked with the biochemist Leonor Michaelis in Berlin. Together, they studied the enzyme invertase, which breaks down complex sugars into simpler sugars. As the complex sugar (sucrose) and the simple sugars (fructose and glucose) absorb a special type of light differently, Michaelis and Menten were able to measure the rate at which sucrose disappeared and fructose and glucose appeared.

From their measurements, Michaelis and Menten derived an equation to describe the behaviour of invertase, and this equation, known as the Michaelisâ€“Menten equation, gave rise to the new field of Michaelisâ€“Menten Kinetics. Their equation reveals that the rate at which glucose and fructose appear depends on not one but three chemical processes: (1) the binding of sucrose to invertase (initial capture); (2) the catalyzed chemical conversion of sucrose into simpler sugars; and (3) the unbinding of fructose and glucose from invertase (final release). If their mathematical modelling of enzyme activity applied only to invertase, their findings might have faded with the years. But the equation is not specific to invertase. In a given environment, the Michaelis-Menten equation applies to any protein that binds and interacts with something else (even the proteins that “read” our DNA).

The Michaelisâ€“Menten saturation curve: a generic plot of the rate at which an enzyme’s product is produced, d[P]/dt, with respect to the concentration of the starting material (substrate), [S]. The Michaelis constant KMis determined by the rates of the three key processes (enzyme-substrate binding, chemical conversion of substrate to product, and release of the final product from the enzyme). Plot by Thomas Shafee CC BY 4.0

Following her collaboration with Michaelis, Menten continued to contribute to biochemistry as she conducted her own research at the University of Pittsburgh. She created a new technique that is still used today to reveal the location of specific proteins using special dyes. Given that proteins are too small to be seen with the most powerful light microscope, finding them is often the first challenge.

Menten was also the first to explore a key method of protein isolation. Once a protein is found, it must often be separated from its fellows for further research. Isolating a protein literally requires removing something that’s invisible from a soup of many other invisible things, a feat that was next to impossible in Menten’s day. In 1944, Menten was the first scientist to use electrophoresis to separate proteins. While Linus Pauling is generally credited as the first scientist to use this technique, Menten’s work separating out different haemoglobin predates Pauling’s work by five years.

Through her own work and her work with Michaelis, Menten enabled us to understand how proteins interact with the world around them, showed that it was possible to isolate a protein, and provided a new method for finding proteins. Scientists still use her dye-visualisation method to locate proteins in human tissues. The Michaelisâ€“Menten equation is still part of every introductory biochemistry course,* and biochemists continue to use this famous equation with ever-increasing frequency as new uses for this timeless tool are uncovered.

* Today the Michaelisâ€“Menten equation is presented in textbooks as a derivation of the original equation which contains the steady state assumption added by George Briggs and John Haldane.