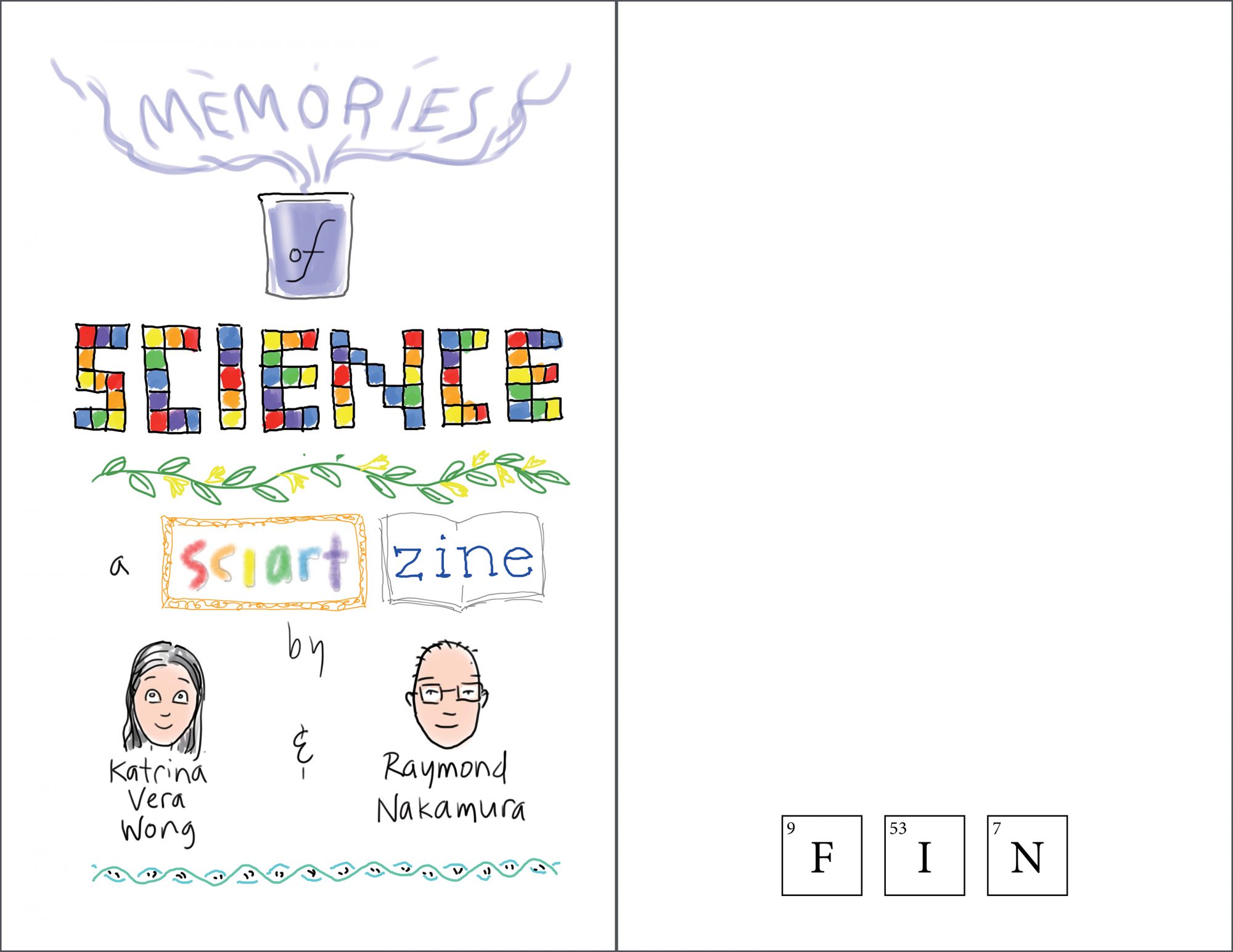 A zine is a vestigial, pre-internet medium that is re-emerging as part of a rise in self-publishing – think of a small-circulation miniature magazine. Zines’ tangible nature is part of their appeal, combined with the independent spirit of their creators and despite, or perhaps in response to, our consumer-centric contemporary culture. As Science Borealis Multimedia co-editors, we love creative expressions of science and we felt the need to contribute to this medium, especially after Katrina noticed the dearth of science zines in Vancouver’s central library. This project became a way to explore the medium ourselves and encourage others to take up a pen or stylus to share their passion for science in their own way.

Our distribution plan for the zine is to print it for our friends, family and interested parties, and to donate copies to places like the Vancouver Public Library and The Regional Assembly of Text.

I have long been interested in comics, and I have seen many self-published ones that are a form of zine, but I had never made a zine before. In the process of working on this project with Katrina, I went to the Art Book Fair at the Vancouver Art Gallery, where I saw a variety of zines and picked up a book written by Joe Biel and Bill Brent called Make a Zine: Start Your Own Underground Publishing Revolution. I am not quite there yet, but it was an interesting exercise in thinking about how media affect the experience of content and the motivations of creators.

When I moved to Vancouver in January 2016, after graduating from the University of Victoria, I wasn’t sure what I would do. Serendipitously, I met a group of creative people and some of them introduced me to the concept of zines through one of their own zine launch parties. I immediately became obsessed and started working on one of my own with the help of my friends. After its launch, I wanted to work on more so I went to the library to look at their zine section and became rather fond of a couple of little science zines that were made by a young boy and his mother. They had recorded their observations – through writing, sketches and photographs – of raising butterflies and praying mantises. Before, I had thought of zines as a means for artists and writers to communicate their work through a direct and personal approach. But I quickly learned that they were for anybody to communicate their interests. So why not make a science zine?

Although you can’t tell a book by its cover, according to Biel and Brent, “Far more people will pick up a zine with an interesting or provocative cover.” The title of the zine came after developing some of the content and was inspired by Loblaws product names from when I grew up in Ontario.

I do most of my drawings, other than my daily comics, on a Wacom Intuos tablet connected to an iMac, running Clip Studio Paint, a weirdly named app that used to be called Manga Studio, for making comics. It does take some time to get used to making lines with your hand and then seeing the product in a different location. I suppose I could have used pen and paper, but it is so much easier to edit things digitally. At the same time, I didn’t want it to look too slick. 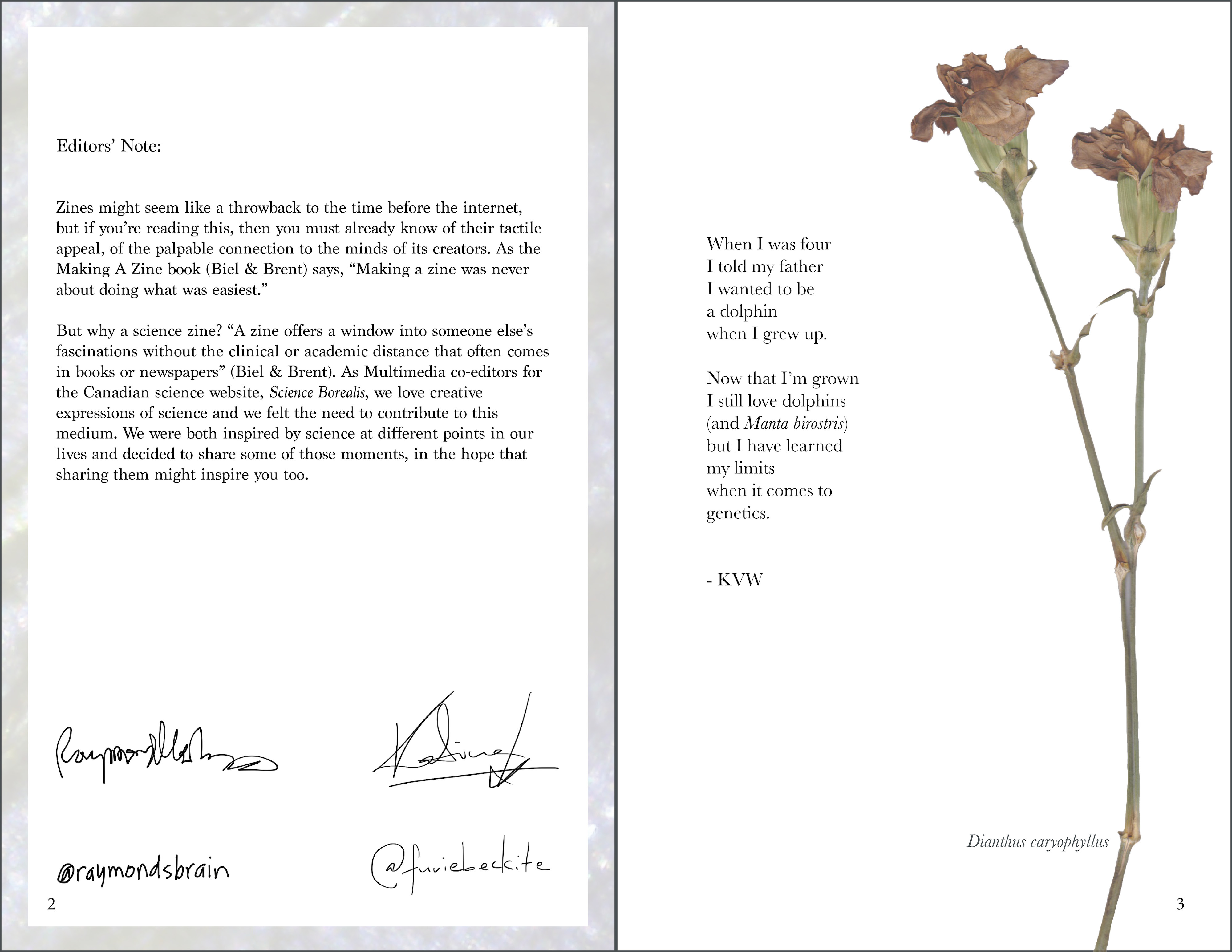 After Raymond developed the title “Memories of Science”, I thought back to my earliest memory of aspiration. It was when my father asked a four-year-old me what I wanted to be when I grew up – I responded that I wanted to be a dolphin. My first encounter with the marine mammal led to this unfathomable desire and led me to pursue biology later in life.

The pressed and scanned carnation is an example of what I’m interested in now. There are so many aspects of biology to get into and botany is the latest field I’m taken with.

I was thinking about how zines tend to be personal takes on subjects. I thought about memorable teachers who may have helped shape my interest in science. I once heard a talk by the novelist Robertson Davies, who distinguished science from magic as the universal versus the personal. At least that is my remembering of it. I think that a personal approach to exploring science might be a way to interest more people in the universal ideas of science, sort of a gateway drug to thinking scientifically. I used a font based on my handwriting through the Calligraphr web site. 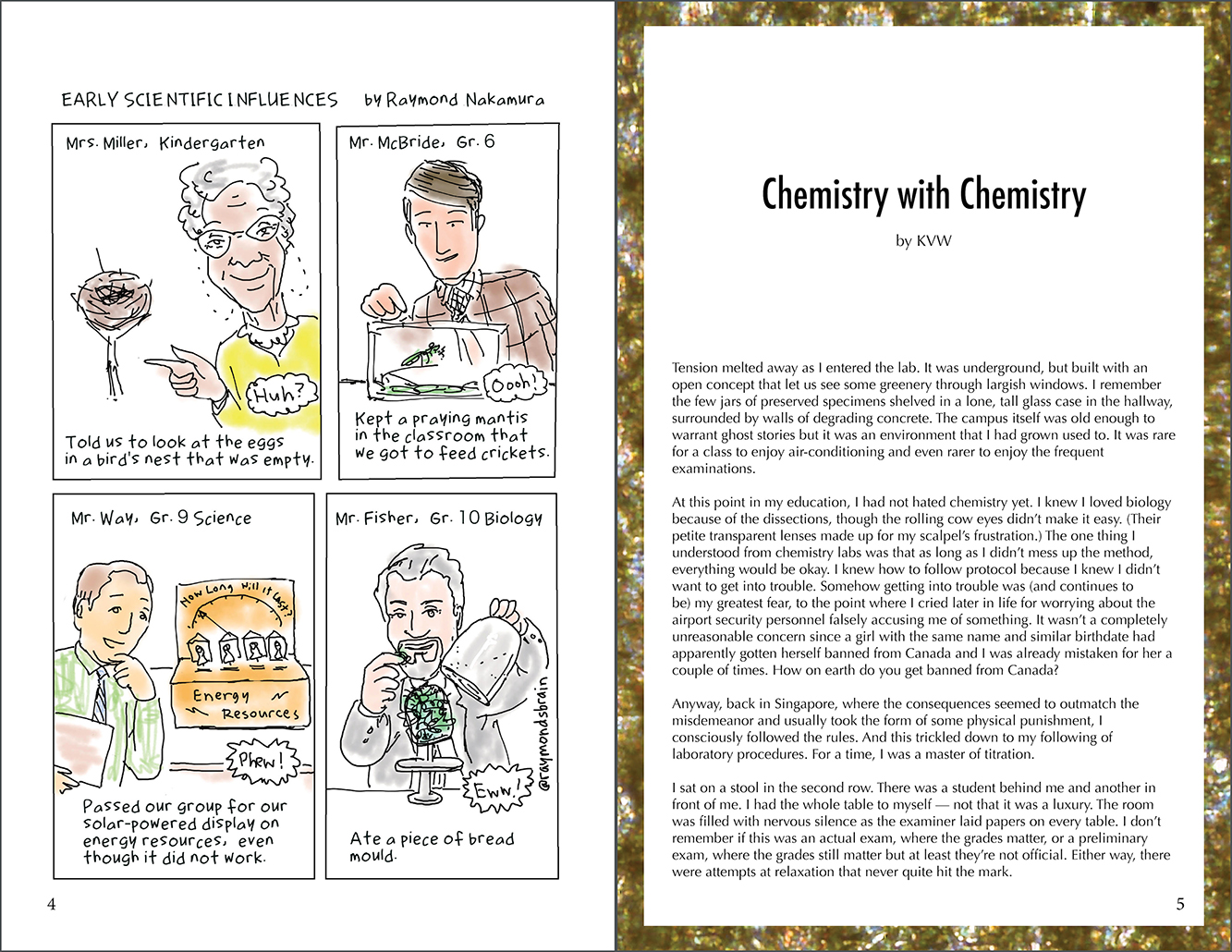 This is a very clear memory I have from secondary school. It’s a personal favourite because of how visually astounding and beautiful the glitter in the beaker was. I was so baffled by how it formed from the simple-looking unknown substances we were given in the exam. It certainly became a defining moment for my overall interest in science.

The border is from a microscopic photograph I took of the petals of a daffodil. (The same goes with the border of the editors’ note but it’s of a different flower.) I collect a lot of plant material and often take microscopic photographs of their parts because, while they’re beautiful on the surface, they are a lot more interesting up close. 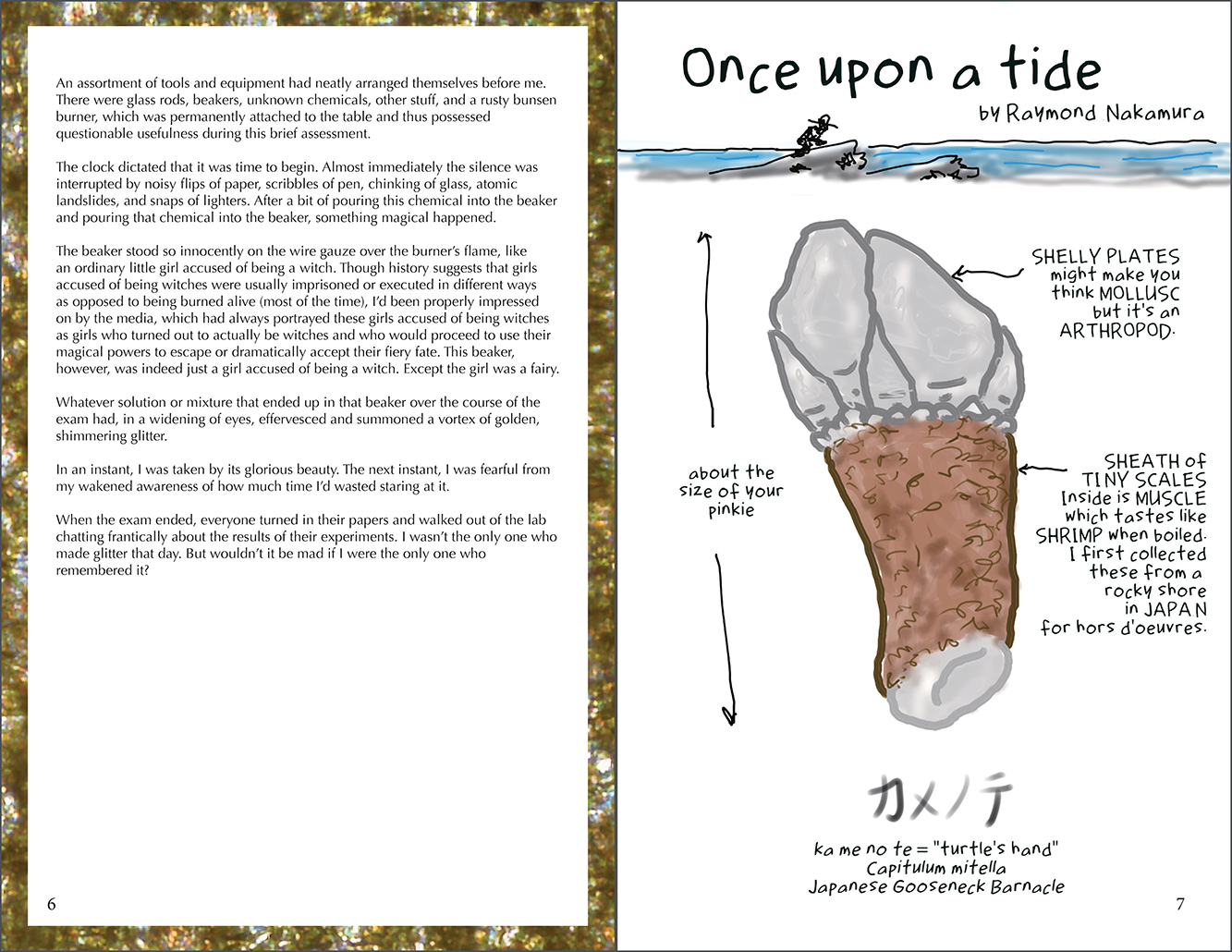 I made the original line drawing when I was studying them in Japan, thirty years ago. That was a very challenging time for me, in many ways, and I came close to packing it all in. In retrospect, I’m glad I stuck it out and have something to show for that time. I scanned the drawing then digitally traced over it and added a layer of colour. 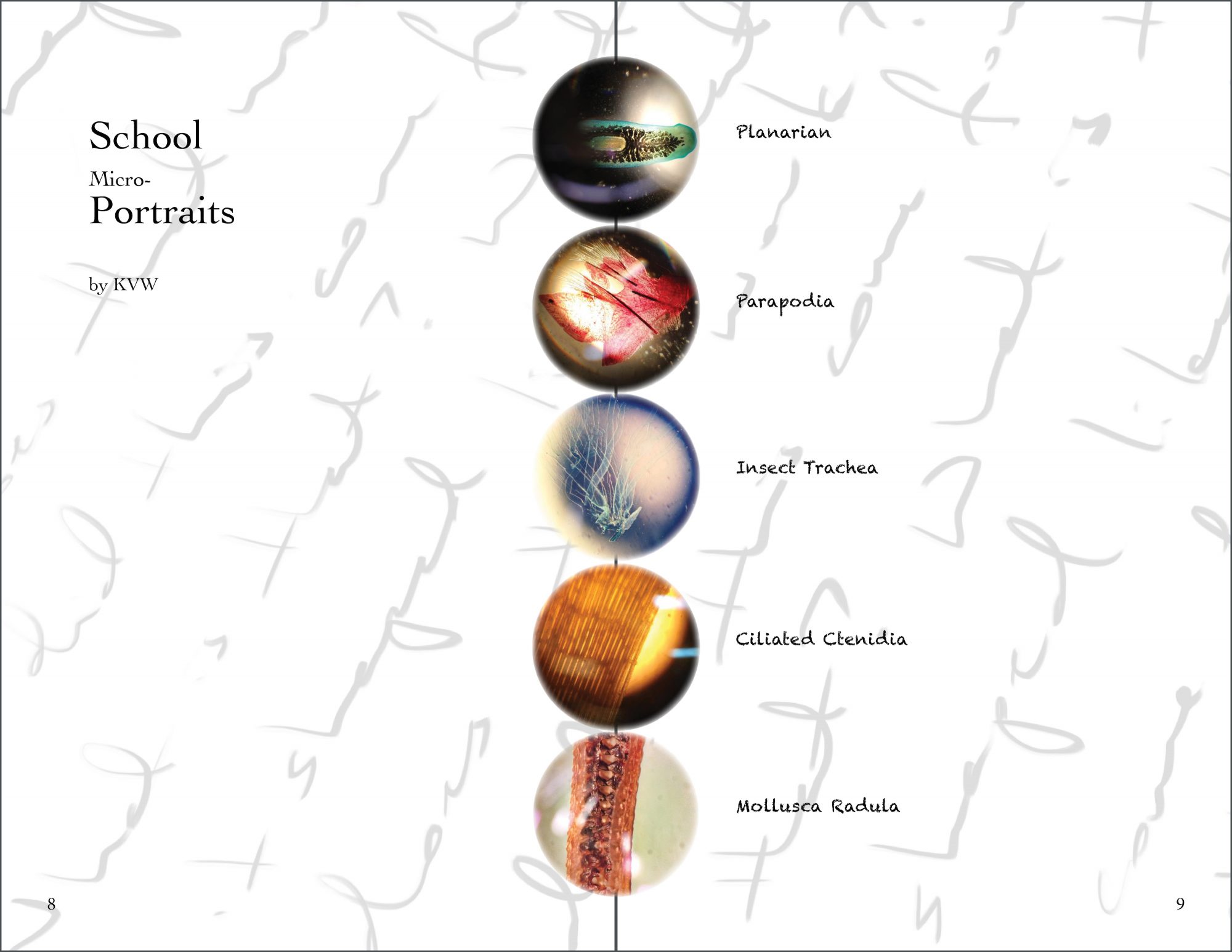 These are photographs that I took with my iPhone through a microscope while I was an undergraduate. I was really beginning to appreciate the function of the microscope because as I started taking a closer look at specimens, I started to ask all these questions about them. What is it? Why is it shaped like that? What is its purpose? Where did it come from? How does it work? And if there wasn’t already an answer, I’d have to develop all these hypotheses about it and that’s where the research begins.

The questions used in the background were digitally written using a Wacom Bamboo tablet. 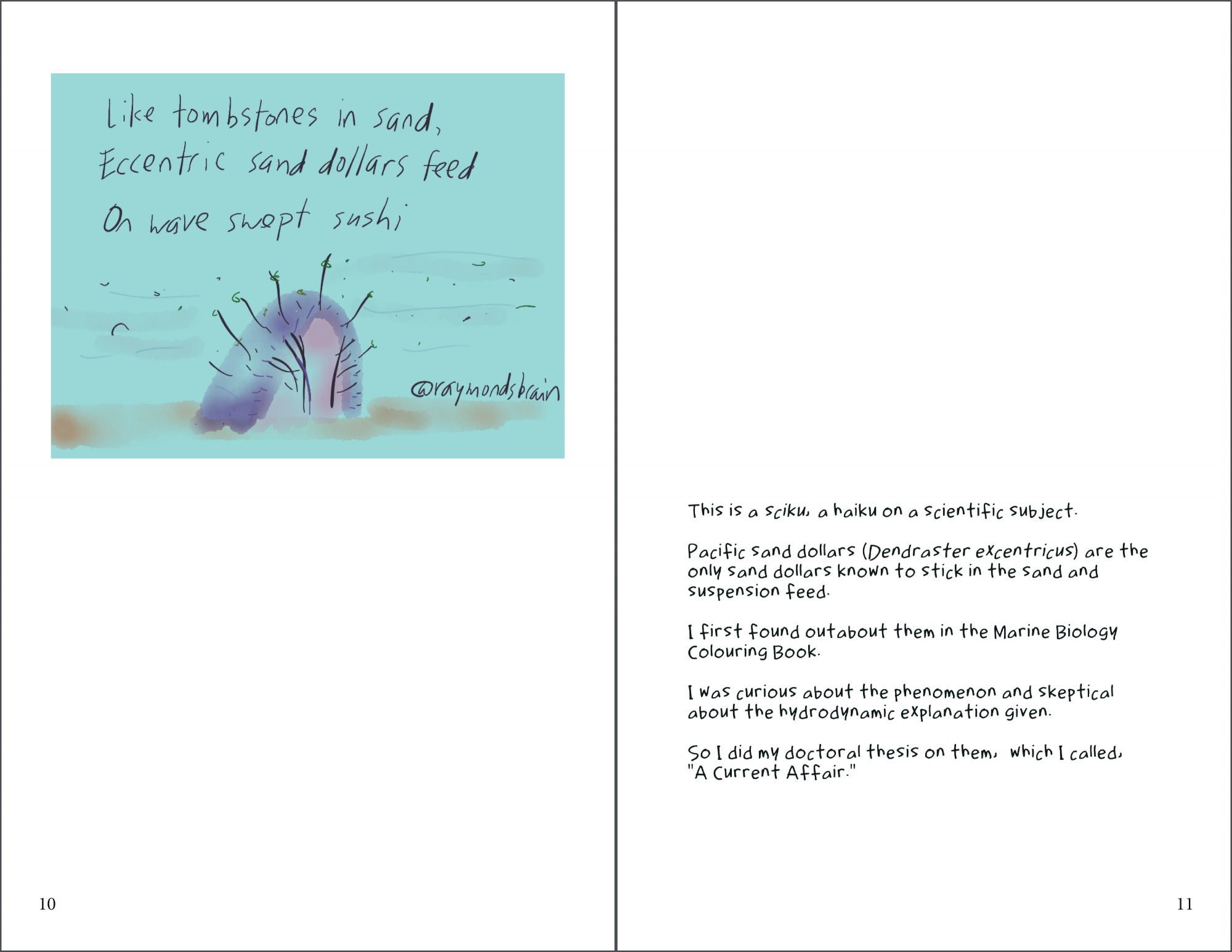 I tried to use “tombstoning” to describe the inclined behaviour of Pacific sand dollars in a paper I submitted to a scientific journal, but the reviewers wouldn’t let me get away with it. Recently, I saw something about #sciku through Twitter. It encourages using haiku for scientific subjects. I don’t claim any special knowledge of the haiku form, but I like the pithiness of it. I drew this on my iPad using a Jot stylus and the 53 Paper app.

See the ‘zine via GIPHY

The contents of this zine were assembled using Adobe InDesign.