About 98 out of 100,000 human patients every year suffer from interstitial lung disease, a broad collection of several lung diseases that manifest as inflammation and scarring of lung tissue and a loss of lung function. Because of the invasiveness of the necessary lung biopsy, however, the diseases are often not definitely diagnosed.

A team of University of Saskatchewan researchers is working to change that. The goal of their One Health project is to develop and test a new lung biopsyâ€“tool prototype, known as a novel transbronchial biopsy tool, that can be used to retrieve lung tissue samples in in a safe manner for accurate diagnosis of interstitial lung disease. 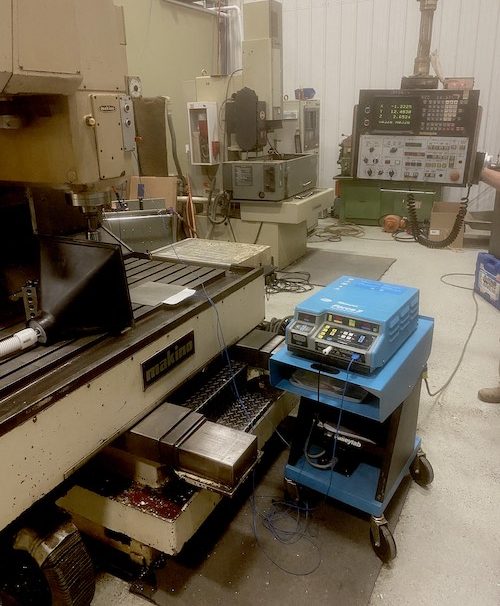 The lab space at RMD Engineering includes an automated mill that will hold and maneuver the biopsy tool as it navigates through tissue of a separated animal lung for testing. It is attached to an electrocautery generator (in blue) that cuts and clots lung tissue, along with a vacuum to minimize odour. Photo by Kody Beler

One Health is a multidisciplinary approach to research that recognizes that the health of people is closely connected to that of animals and our shared environment. It seeks to achieve greatest health for animals, people and the environment.

Collaboration between disciplines is needed for success of the University of Saskatchewan project, as the development of the biopsy tool prototype draws on many areas of expertise.

“We’re talking about developing a new diagnostic tool,” says Dr. Julia Montgomery, associate professor of large animal medicine at the Western College of Veterinary Medicine. “That requires the expertise of engineering on the design and development side along with the input of what we want to use the tool for from a medical perspective. That is the interplay between medicine and engineering. A veterinary medicine perspective allows us to use animal systems as models. This ties in to a One Health approach to find solutions for all disciplines.”

Montgomery first met University of Saskatchewan College of Medicine respirology professor Dr. Chung-Chun (Anderson) Tyan when they were members of the university’s Respiratory Research Centre, and they put a team together after discussing Tyan’s idea for the project.

RMD Engineering President Jim Boire, another member of the team, is excited about working in the uncharted territory this project represents. The tool is being developed and tested at his company’s workshop.

“From an engineering standpoint, this project is everything from mechanical design to controls and instrumentation along with a blend of traditional manufacturing, engineering and medical device manufacturing,” he says. “This collaboration is a brand new field.”

The problem with lung biopsy techniques in use today 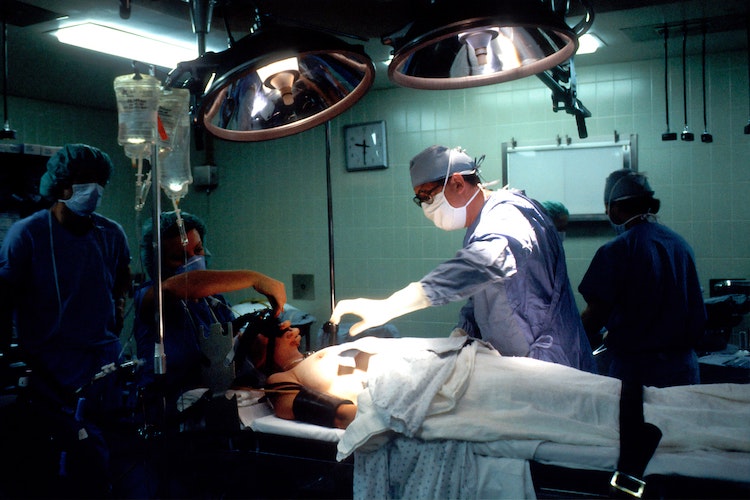 Surgical lung biopsy is the present-day gold standard technique for diagnosing interstitial lung disease. It requires deep sedation and is complex, and patients can die as a result. Photo by National Cancer Institute CC0 unsplash

Interstitial lung disease typically manifests in the lower outer areas of the lungs. Any person can be affected by the disease, although research suggests genetics and certain medications are significant risk factors. A previous study also found that the condition is more prevalent among Indigenous populations in Canada.

To diagnose the condition, a physical examination, including a thorough inspection of the lungs, and radiography are carried out. However, the lung tissue samples that are required to confirm diagnosis are often not retrieved because obtaining such samples with currently available biopsy methods is seen as invasive by the general public and comes with significant health risks.

Three current methods of lung biopsy are used, and each comes with its own limitations and level of health risk. The transbronchial forceps biopsy is typically used when the patient is under conscious sedation and has a lower risk of causing a collapsed lung. However, lung tissue samples obtained by this method are smaller and more fragile, which hinders accurate diagnosis of interstitial lung disease. Transbronchial lung cryobiopsy obtains larger samples while the patient is deeply sedated but comes with a higher risk of bleeding and a low risk of causing a collapsed lung. Surgical lung biopsy is the present-day gold standard technique. It, too, requires deep sedation, but it is more complex, and patients can die as a result.

An improved biopsy method is desirable. 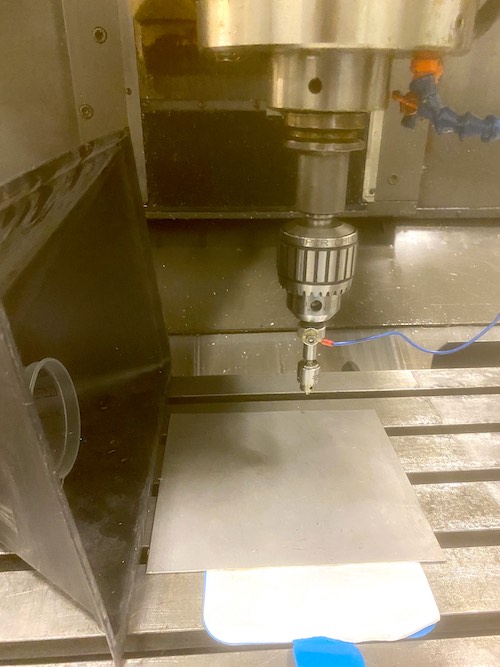 A closer look at the mill that holds the new biopsy tool, along with a vacuum and a plate that the lung will rest on. Photo by Kody Beler

The tool that Montgomery, Tyan and Boire’s team is working on will deploy through a bronchoscope â€“ a cable that is passed through the trachea to reach further respiratory branches â€“ and travel to the outer portion of the lung, where interstitial lung disease typically manifests. The target sample will be cut using existing electrocautery equipment â€“ equipment that uses electricity-generated heat to break down, clot and separate living tissue.

Before the novel transbronchial biopsy tool can be used in human patients, the researchers must determine how flexible it is for reaching outer lung tissue through the working channel of a bronchoscope, how well it cuts, clots and retrieves tissue samples along with its optimal electrocautery power settings and biopsy locations. Because the airways in the lung progress into ever-smaller branches, the must retrieve tissue samples that are too small to be seen by the bronchoscope.

To do this, the researchers are testing the tool on pig and horse lungs â€“ first on cadavers and separate lungs, then on live animals. It is easier to obtain animal organs and cadavers than human specimens. In addition, the anatomical system of the pig greatly resembles that of the human, and horses and humans share similar lung diseases. Horses also tend to suffer from lower airway diseases due to their build, and their longevity and size allow for the repeated collection of larger tissue samples.

To make the testing environment more realistic, lung biopsy testing will be tested out in a respiratory simulation chamber.

“As a veterinary researcher interested in the respiratory system, I like the idea of using this tool to diagnose interstitial lung disease in horses,” says Montgomery.

Western College of Veterinary Medicine student Kody Beler wrote this article as part of Science Borealis’s Summer 2021 Pitch & Polish, a mentorship program that pairs students with one of our experienced editors to produce a polished piece of science writing.