Did you watch Cosmos on Sunday? The reboot of Carl Sagan’s 1980 classic hosted by Neil de Grasse Tyson has proven to be enormously popular, drawing millions of viewers every Sunday night. Last Sunday’s episode was the second to last, and the finale airs next week. 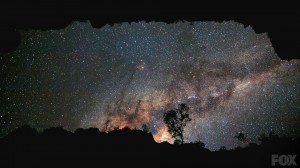 The enduring popularity of Cosmos, which uses animation and special effects to transport viewers “across time and space,” proves that there is still an appetite for good science education and communication. Astronomy is a natural starting point to grab the viewers’ attention: who hasn’t looked up at the night sky and wondered what was out there? Cosmos, in both incarnations, uses that universal experience as a door into laying out the form and history of the universe as a compelling and awe-inspiring story.

The two editions of Cosmos follow similar paths: they start with a brief history of the universe, introduce the vast range of scales needed to talk about the cosmos and, from there, range from discussions of the origins of life to the nature of core areas of fundamental physics to the geological history of the Earth. The broad scope of Cosmos is one of its great strengths: taking a very big-picture view allows the show to portray the richness of the universe and the boundless limits of exploration.

The social context of the two Cosmos is quite different: when Sagan’s aired, Ronald Reagan was ratcheting up the Cold War rhetoric, and with the development of the Strategic Defence Initiative only a couple of years away, there was a sense that science was a useful, positive power that we were harnessing in a variety of ways to improve our lives. Sagan’s Cosmos addressed climate change and nuclear winter, especially in the last episode, but in some ways, that version was more about pure science than how science fit in a social context.

Tyson’s Cosmos, however, airs in an era of considerable scientific backlash. Last week the US Congress’ science committee declared that the goal of the IPCC report is “an international climate treaty that redistributes wealth among nations”, showing a breathtaking lack of basic understanding of science and the process under which the IPCC report is written. Here at home, our government is slashing science funding, decimating environmental regulation and conservation laws, and consistently ignoring scientific advice on principle rather than merit. There are outbreaks of easily preventable (but sometimes fatal) diseases due to falling vaccination rates, fuelled by the spread of misinformation. Creationists are pushing for evolution to be removed from public school curricula, or at the very least taught alongside evolution. The public perception of scientists is becoming more polarized: while much of the population recognizes that science is based on evidence, an increasingly vocal sector insists that scientists, en masse, are little more than publicly funded charlatans. 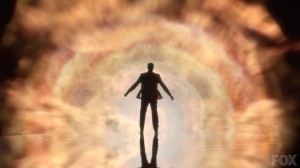 Sunday’s episode rebutted that notion head-on, discussing climate change in stark terms with a sense of urgency and hope. Sagan was one of the first scientists to publicly sound the alarm on climate change, and it’s fitting that Tyson addressed the issue so rigourously. The last segment of Sunday’s episode in particular is a powerful argument for a renewed and concerted effort to harness our scientific knowledge and meaningfully address climate change.

As our climate changes, requiring scientific insight to steer far more than just our science policy, engaging media like Cosmos is important to clearly establishing the underpinnings of fundamental science for a broad audience. Astronomy, and more broadly physics, is an accessible lens through which to portray those fundamentals, and relatively uncontroversial in the face of increasingly powerful anti-science campaigns.

This is not to say that it is a faultless show. Taking such a broad view means inevitably that some milestones in the history of science and scientists are overlooked, and there’ve been criticisms on how some of the stories that were chosen were told, as well as the framing of science as an endeavour undertaken solely by individual intellects. While there were several female scientists featured in the eighth episode of the reboot, it would’ve been nice to have women’s contributions more integrated into the whole series, rather than collected in a single episode.

But it’s difficult to understate the importance of a show that gets people genuinely excited about topics that are generally considered arcane. Cosmos devotes several episodes to detailing and explaining fundamental physics, including the nature of light, electromagnetism, gravity, particle physics, and stellar physics. These topics are treated with wonder and awe, just like the rest of the show, rather than devolving into a stiff or formal explanation. Sagan and Tyson were both trained as astrophysicists, so it’s not surprising that they would be so enamoured with these topics, but their awe is so palpable and accessible as to be contagious. Good educational media doesn’t just lay out information for the viewer, but rather gets the viewer excited about that information, and eager to continue exploring. The wild success of the recent Reading Rainbow Kickstarter is a textbook example of how deeply that approach can resonate with viewers of all ages. 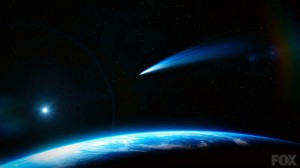 Tyson has been very explicit about the foundational worldview that science gives us. As he said on the Colbert Report earlier this year, “That’s the good thing about science: it’s true whether or not you believe it.” The laws of physics don’t change just because it’s inconvenient to a politician’s re-election chances or don’t mesh with an educator’s faith, and both editions of Cosmos do a fantastic job of showing how universal those laws are.

Good science education and good science media are more important than ever before, if we are to stem an intellectual regression during a period when science-informed policy is more important than ever. Tyson’s Cosmos does an excellent job of showing that the Sagan model of using astronomy as a door to the richness of the universe is still relevant and resonant. But is it really that surprising? Sheer wonder is never outdated or irrelevant.

4 thoughts on “Physics and astronomy hit the mainstream: Cosmos reboot”