This week marks the end of our Reflections: 100 Voices for Canadian Science Communication project. We started this project as a complement to Agence Science-Presse’s #100LaScience campaign, which shared science journalists’ thoughts on science communication. Our project wouldn’t have got off the ground without the initial help of Science Borealis volunteer and ASP journalist Pascal Lapointe, and the long-term dedication of Science Borealis volunteer Peggy Muddles.

We’ve had a fantastic two months sharing science communication insights, advice, and musings from Canadians across the country. Their words address not only the value and impact of good science communication for society, but also give insight into best practices and opportunities that we can all use to help improve science literacy.

[These quotes] address not only the value and impact of good science communication for society, but also give insight into best practices and opportunities that we can all use to help improve science literacy.

Each quote is made more memorable by the sketch in which it’s presented. We’re grateful to the artists who donated their time and labour to make this project possible: Peggy Muddles, Jen Burgess, Raymond Nakamura, Geoff Lee, Catherine Lau, Hannah Brazeau, Premee Mohamed, Robert Bateman, Jacques Goldstyn, and Mika McKinnon. 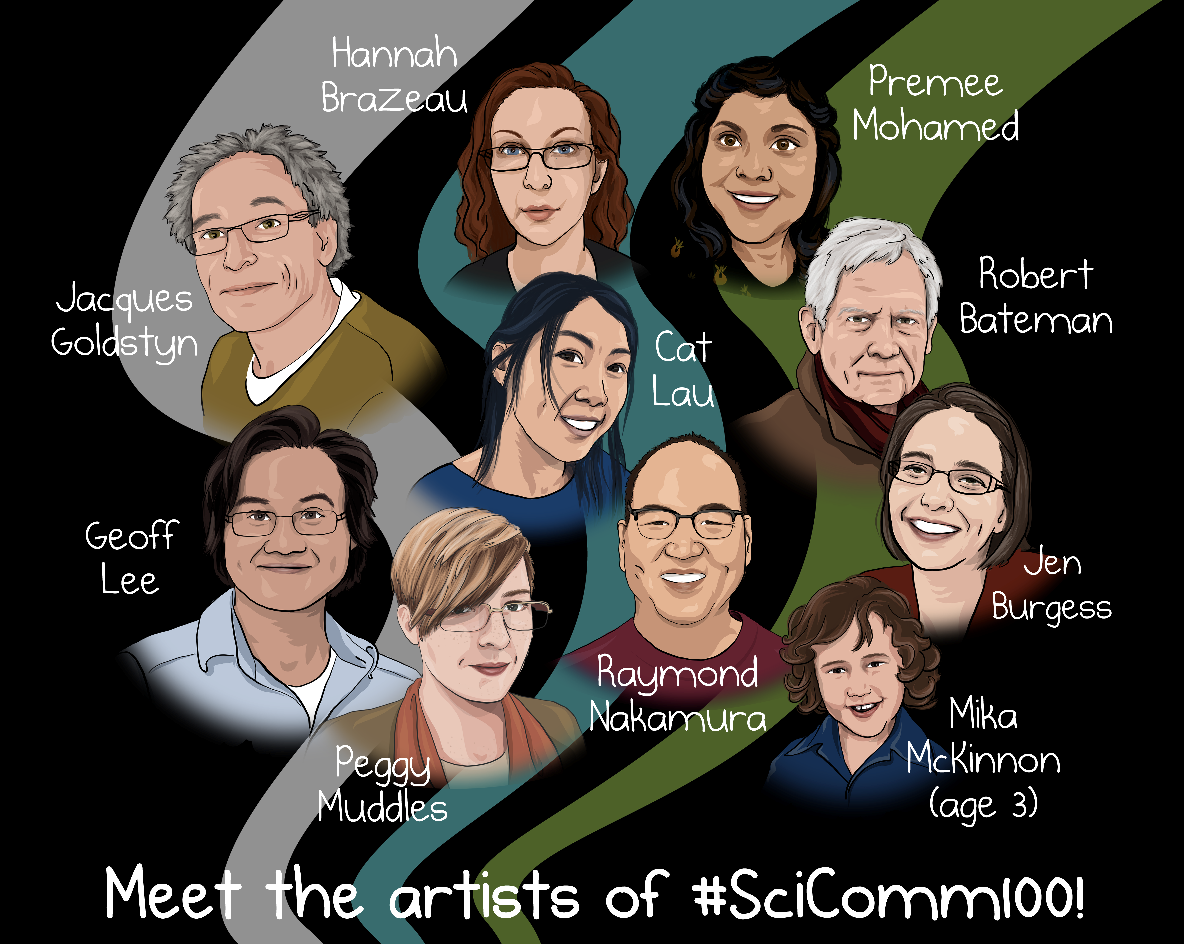 The artists of #scicomm100 (Art by Peggy Muddles, used with permission).

We’d also like to thank our fabulous social media team, who kept the posts coming on Twitter and Facebook and dealt with any issues as soon as they cropped up: Kai Hutchence, Jesse Rogerson, Liz Martin-Silverstone, and Kathi Unglert.

We kicked off our project with a quote from a popular Canadian science communicator, Col. Chris Hadfield. As the first Canadian to walk in space, and a former Commander of the International Space Station, who better to give a perspective on the importance of science and its impact on humanity? He addressed the key reason we need science communication: to inspire and connect people to improve life. 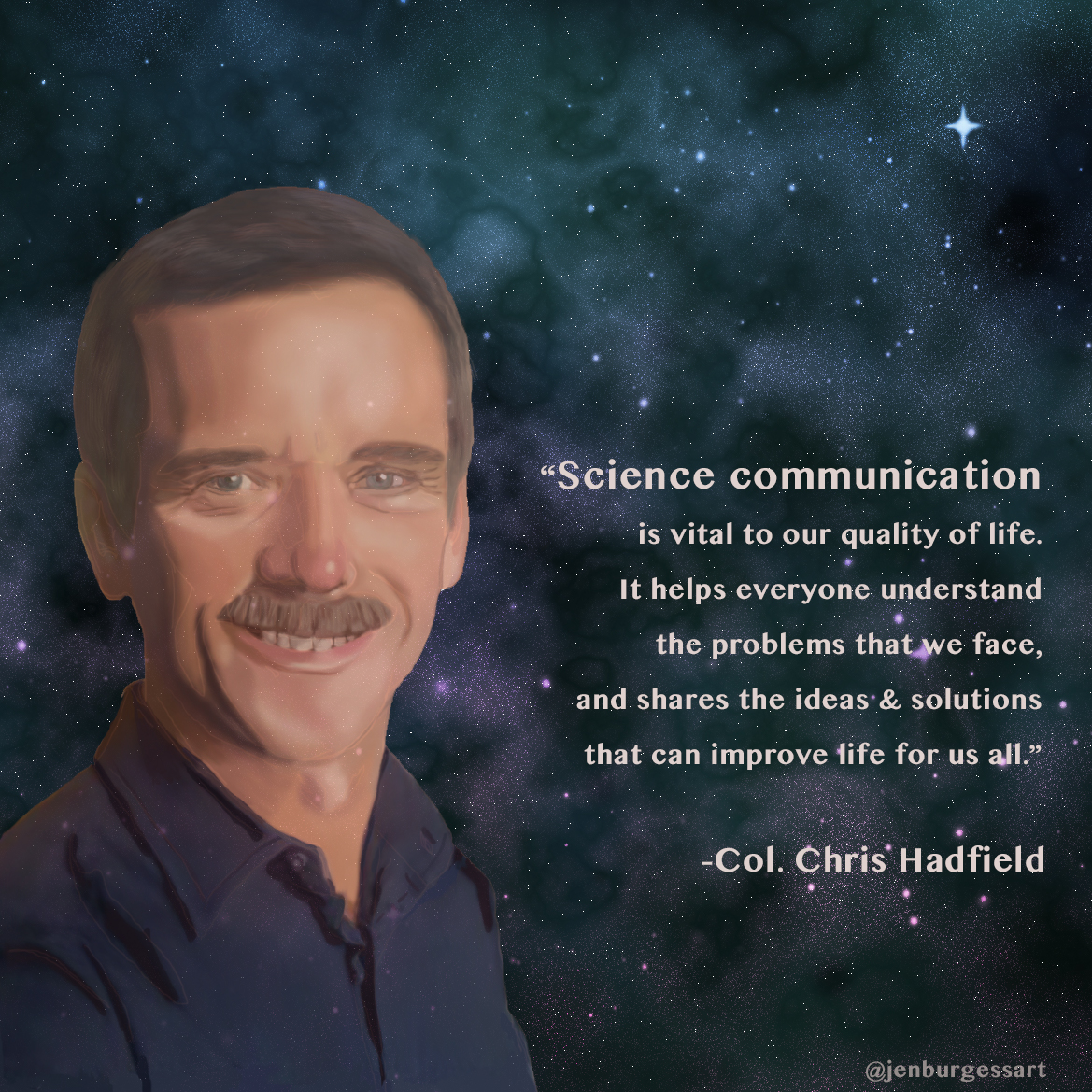 We were particularly pleased that several well-known Canadians participated. A small sampling includes Dan Riskin and Jay Ingram, both of Daily Planet fame; David Suzuki from CBC’s The Nature of Things; and Carin Bondar from Outrageous Acts of Science. This project has shown that Canadian science communicators are household names, and reminds us how entertaining and engaging science communication can be.

This project…reminds us how entertaining and engaging science communication can be. 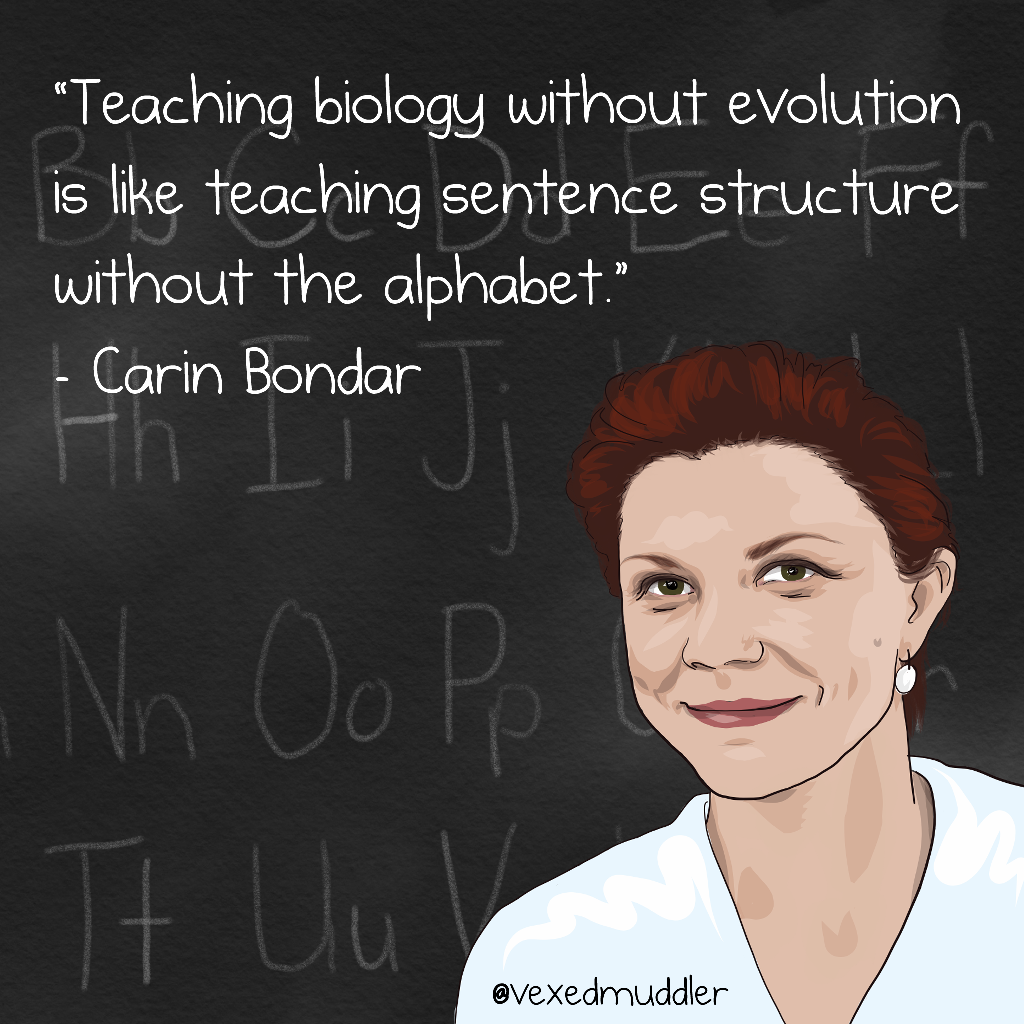 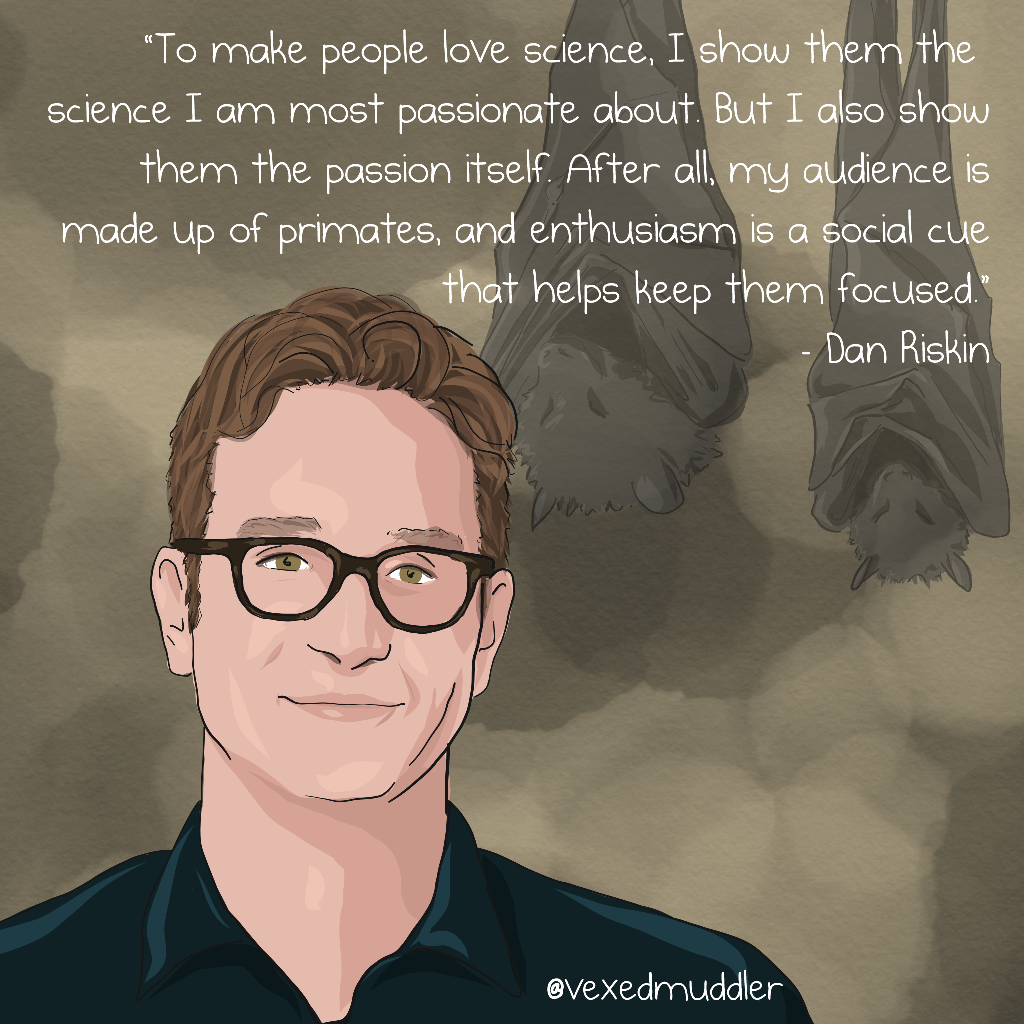 Several science journalists explained the role of journalism in contributing to public science literacy. Ensuring that science news is well-reported and not just relegated to a sound bite is a challenging task, but reporters like Emily Chung, Margaret Munro, Colette Derworiz, Tom Spears, and Mike De Souza help Canadians stay up to date on scientific issues and breakthroughs. 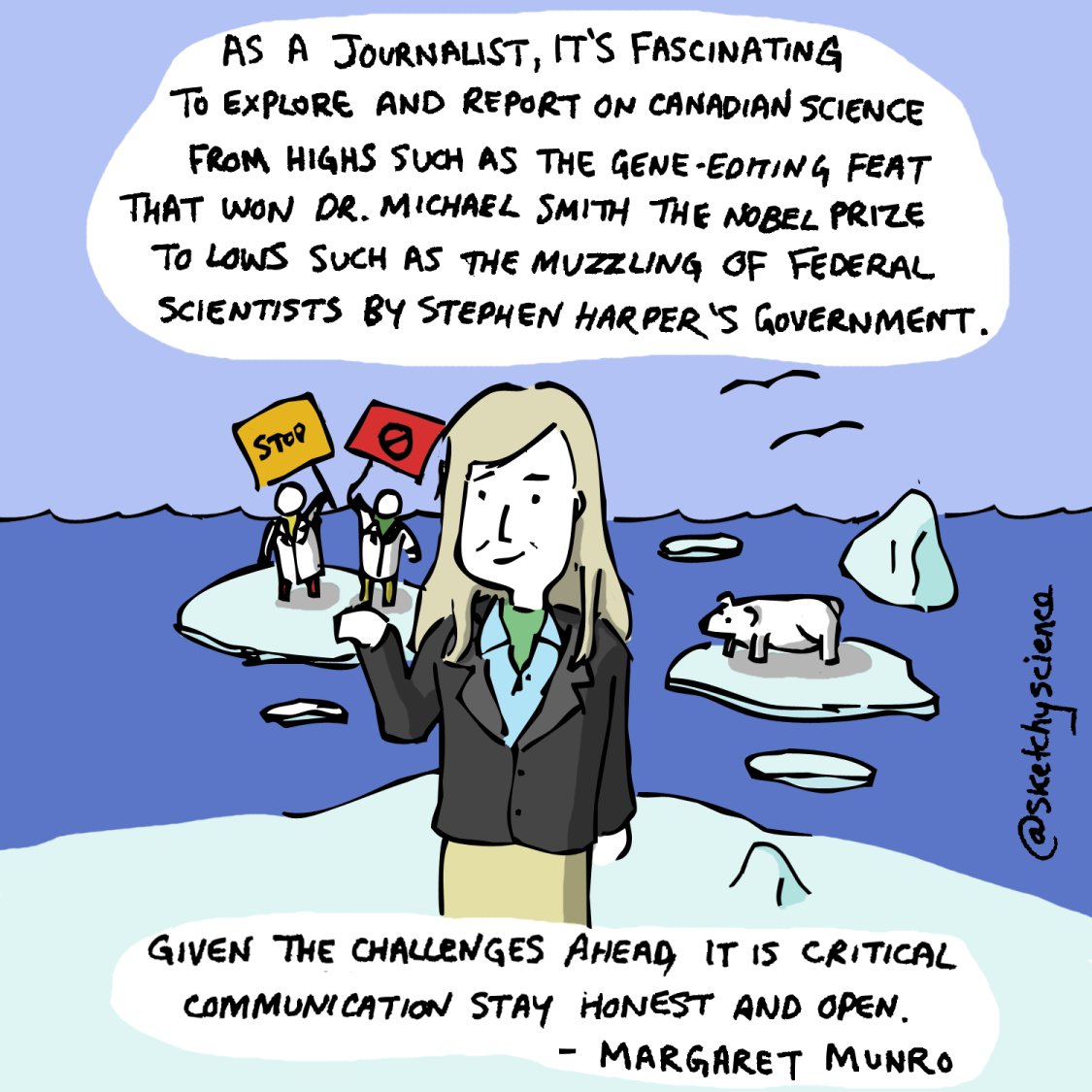 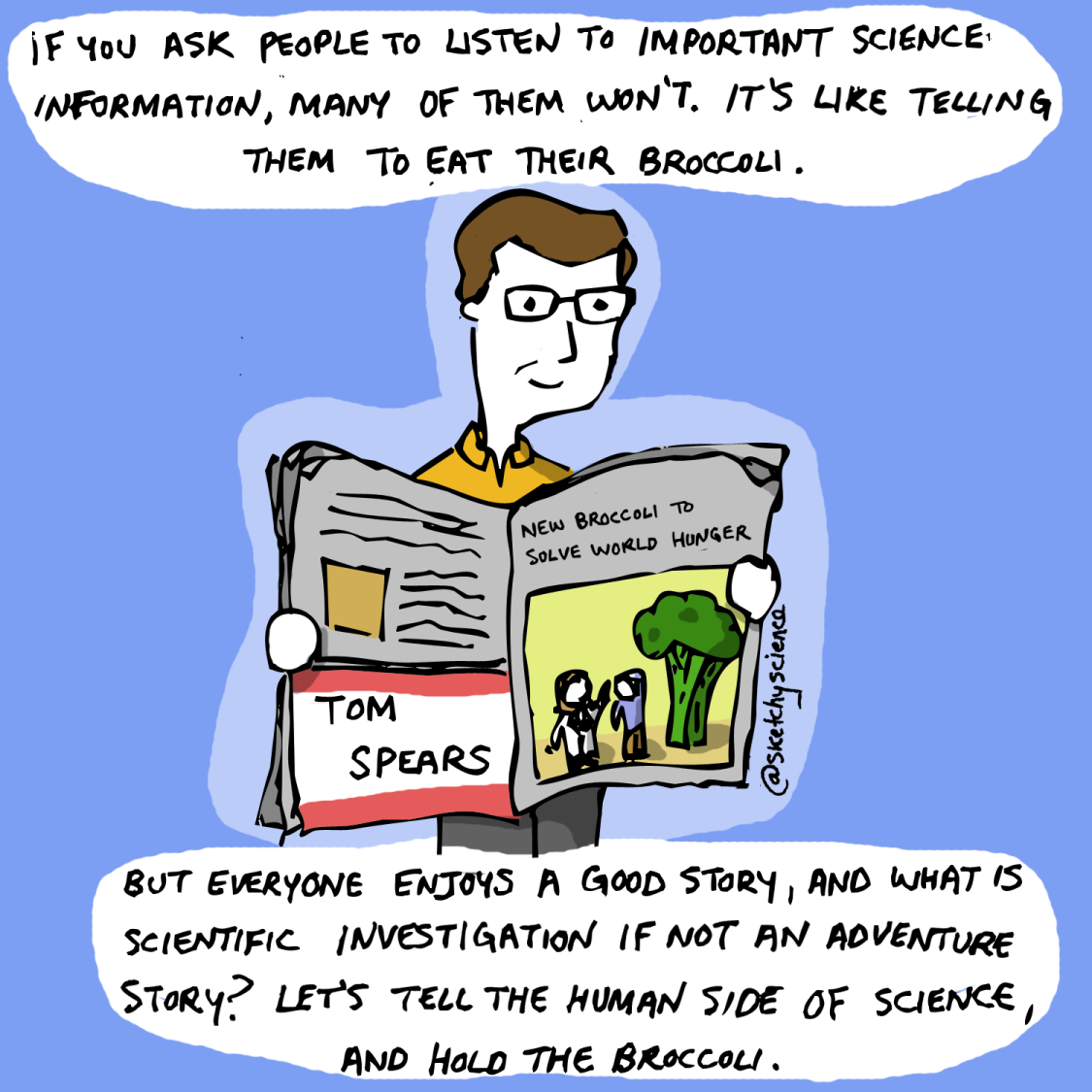 Science policy leaders also got involved in the project. Canada’s Minister of Science, Kirsty Duncan, not only provided an insightful quote about how science communication and knowledge mobilization transform society, but also gave us a signal boost on social media. 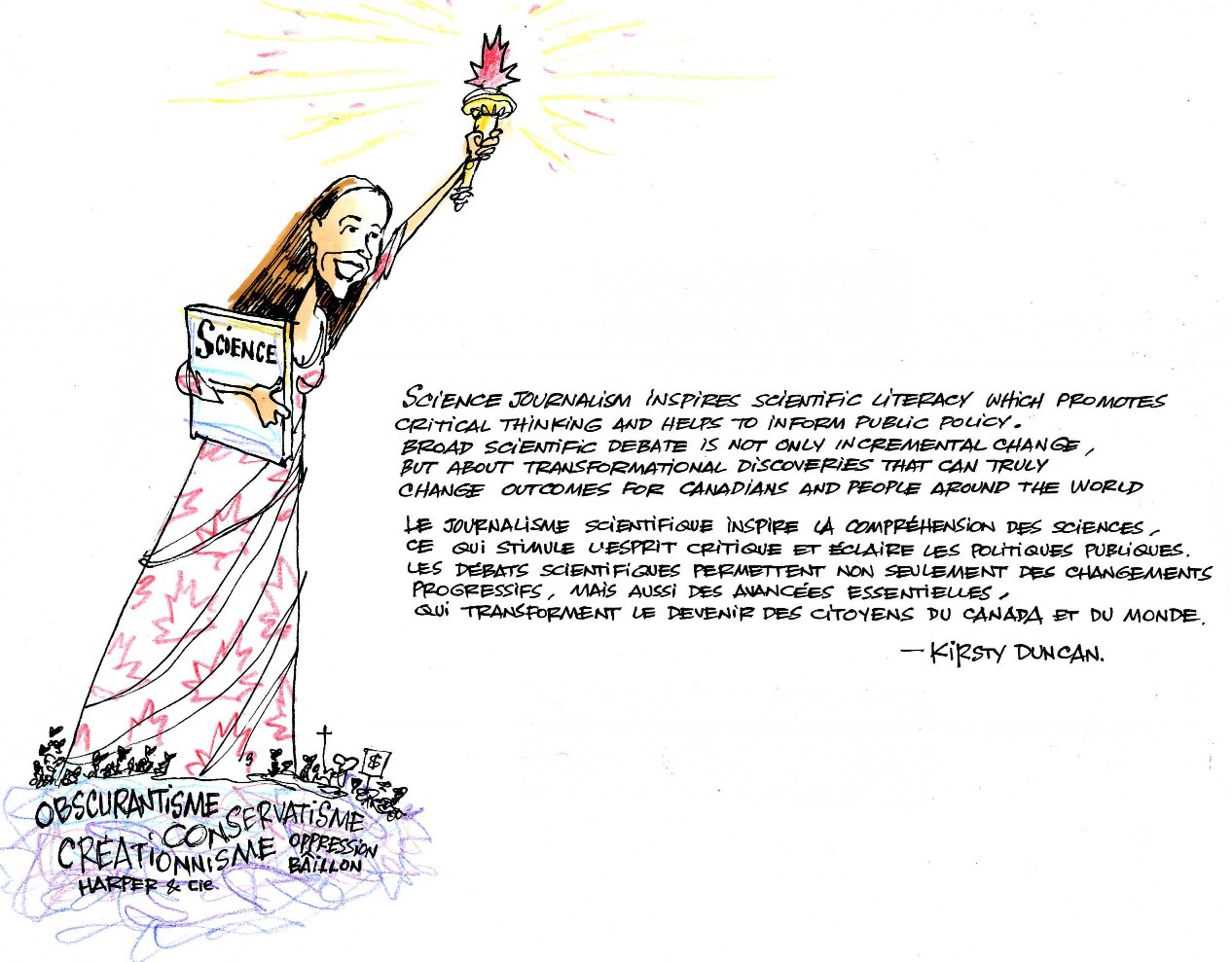 Mario Pinto, the head of Canada’s Natural Science and Engineering Research Council funding body, outlined his hope that Canadian culture can be one of science and innovation. Eric Meslin, President and CEO of Council of Canadian Academies, made it clear that we need to forge stronger links between science and the public. Bernadette Conant, head of the Canadian Water Network, tied science communication into trust and narrative. 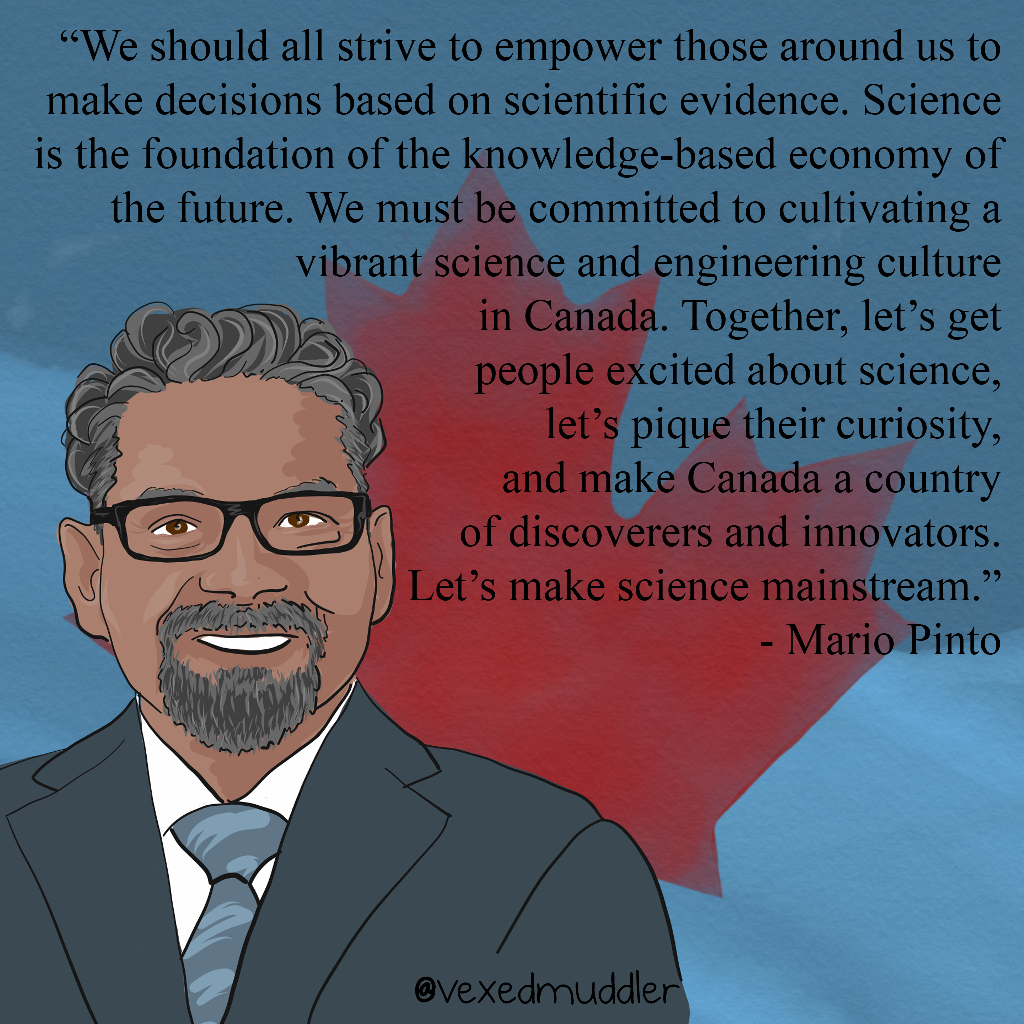 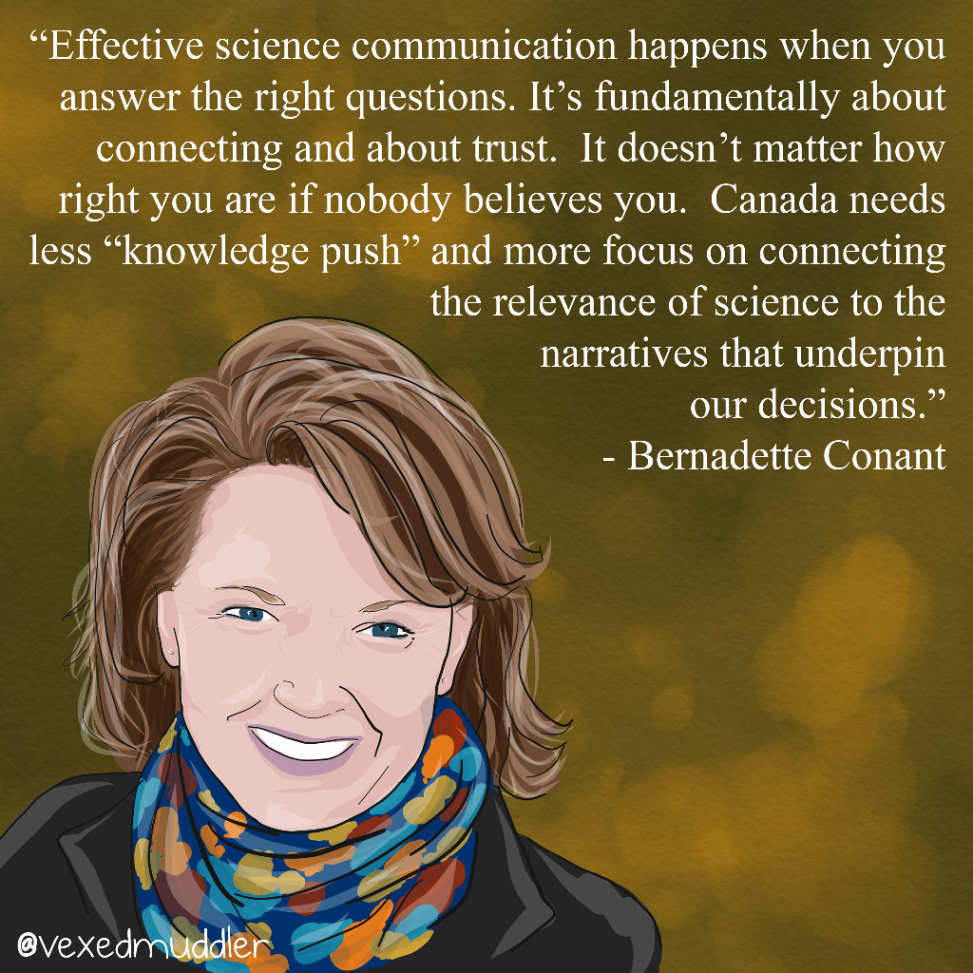 On the education side of things, we shared quotes from many STEM education and community outreach professionals, including several from Canada’s major museums. Marianne Mader of the Royal Ontario Museum and STEAMLabs talked about maker culture and its ability to turn curiosity into action. Phil Currie of the Royal Tyrell Museum recalled how a favourite childhood book inspired his lifelong passion for palaeontology. Scientist and game designer Jeremy Friedberg reminded us that science is a way of thinking, an important concept he uses when developing STEM educational games at Spongelab. 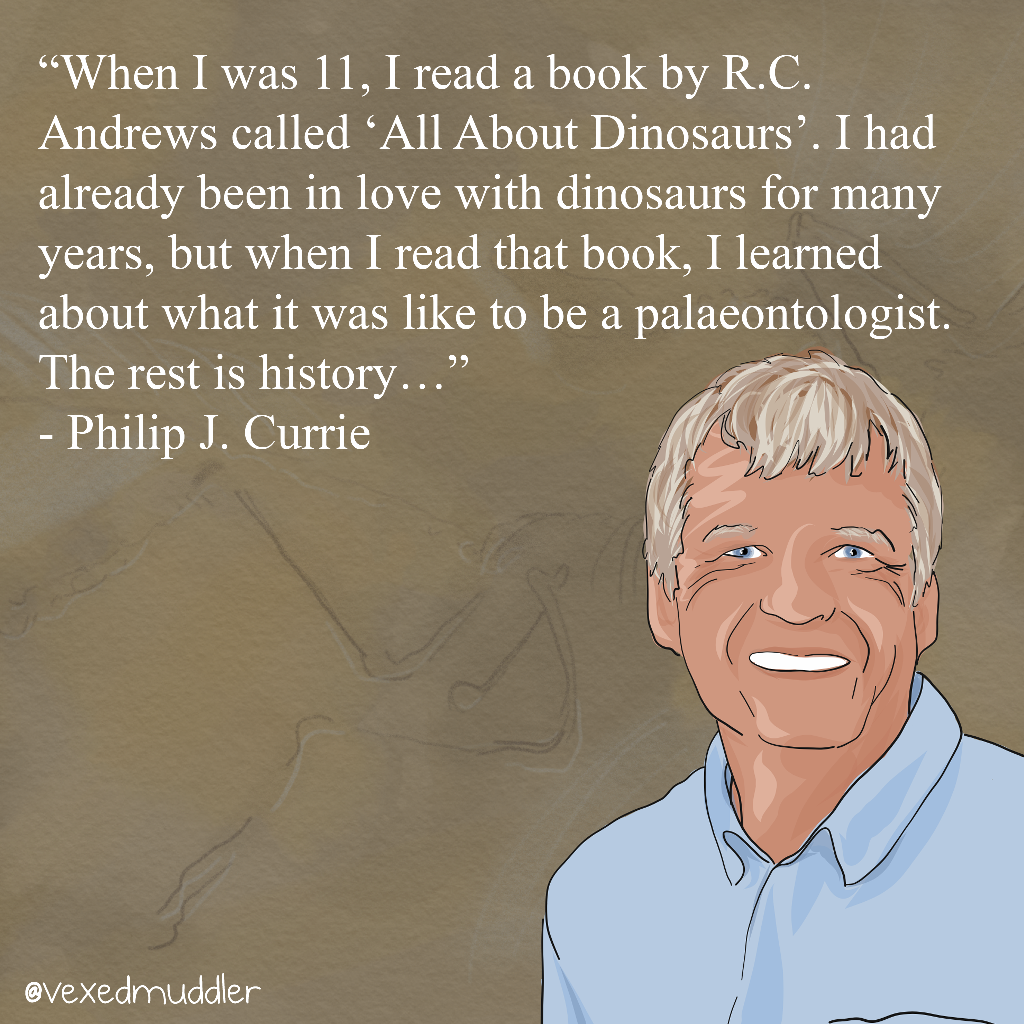 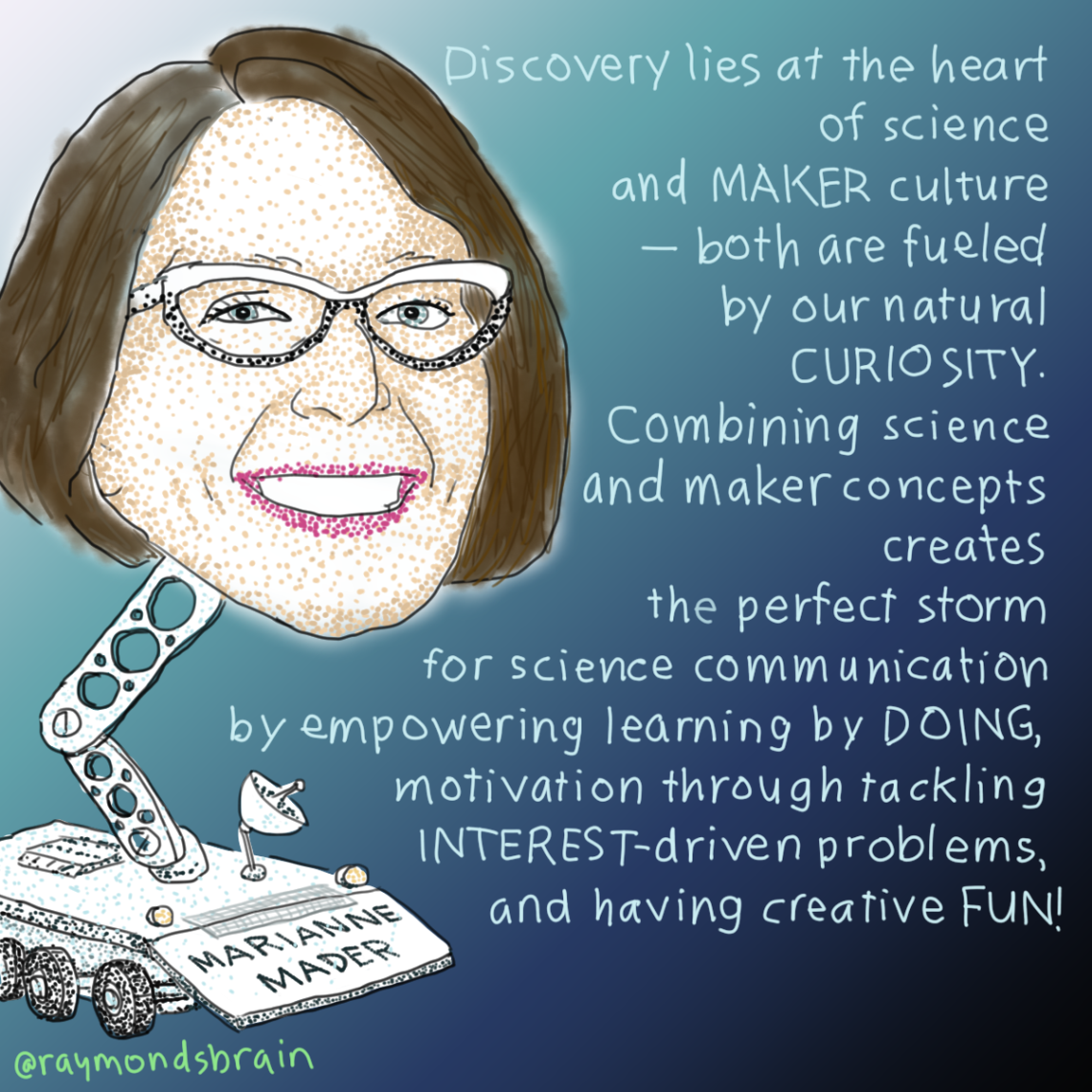 We also shared quotes from well-known Canadians in the arts. Children’s book authors Claire Eamer and L.E. Carmichael spoke of the importance of science communication in inspiring the next generation of scientists. Visual artists like Bettina Forget, Elaine Whittaker, and Paula Murray emphasized metaphor and poetry as a means of sharing science ideas and generating interest in science.

Science communication [is important] in inspiring the next generation of scientists 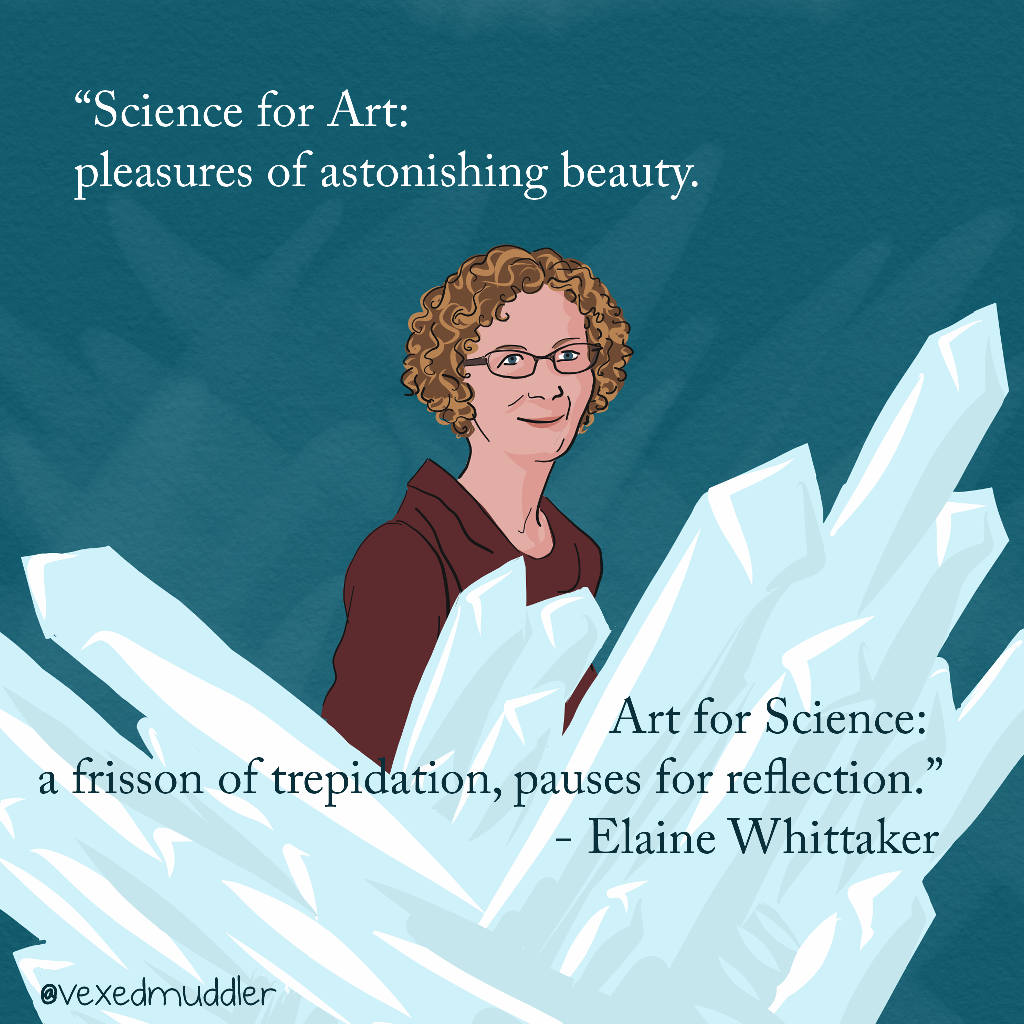 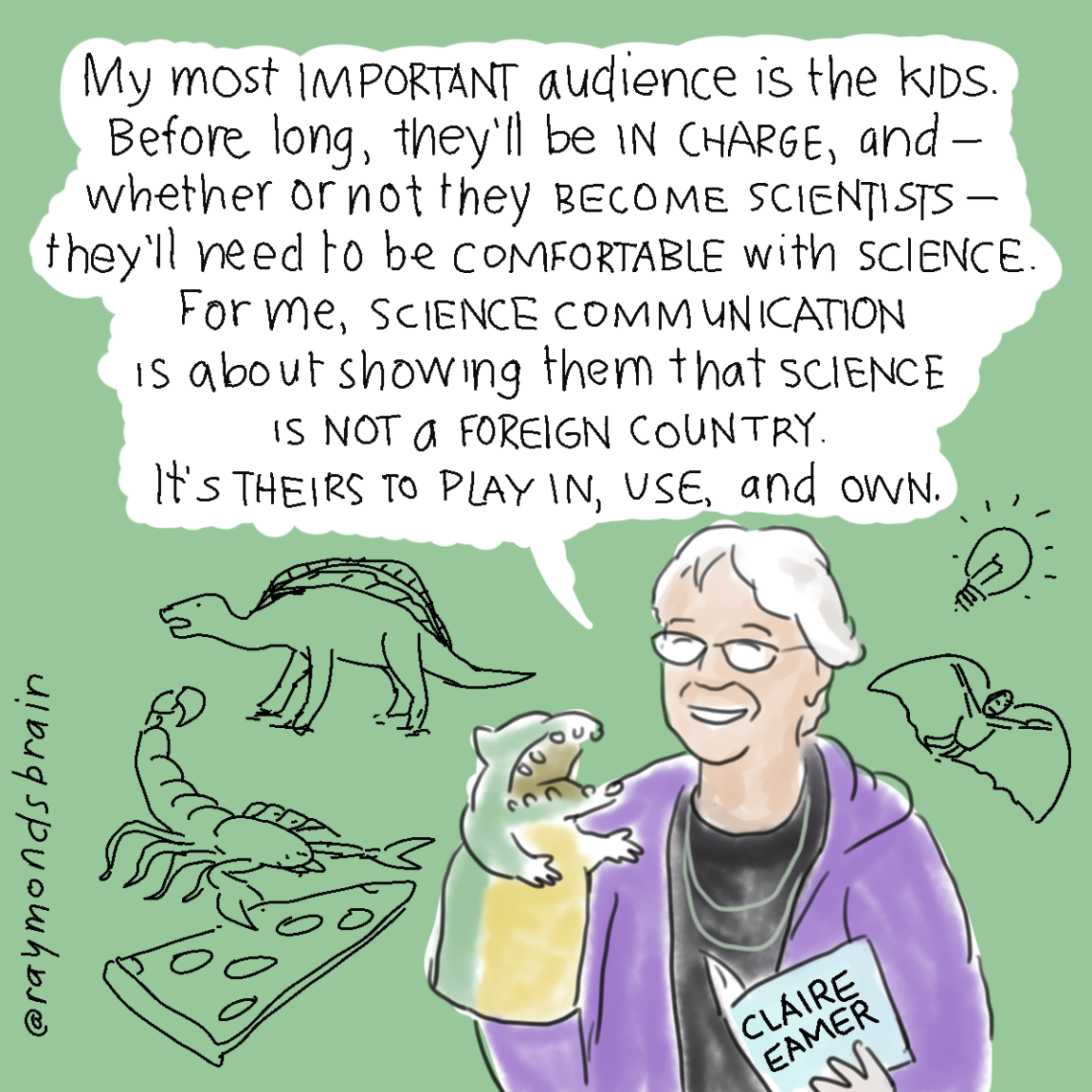 We included quotes from a broad range of academic scientists, representing a diversity of research fields at universities across Canada. Ryerson University’s Dean of Science, Imogen Coe, reminded us that scientific literacy empowers people, an important consideration in her work to promote women and diversity in STEM.

Chris Darimont, a University of Victoria professor and member of British Columbia’s Hakai Institute, spoke about the energy he gets from science communication when he sees the outcomes of sharing important environmental research with the public. At Western University’s Centre for Planetary Science and Exploration (CPSX), Livio Tornabene told us that images can be inspirational, such as those from the Mars Spirit and Opportunity rovers, as they transcend language barriers. 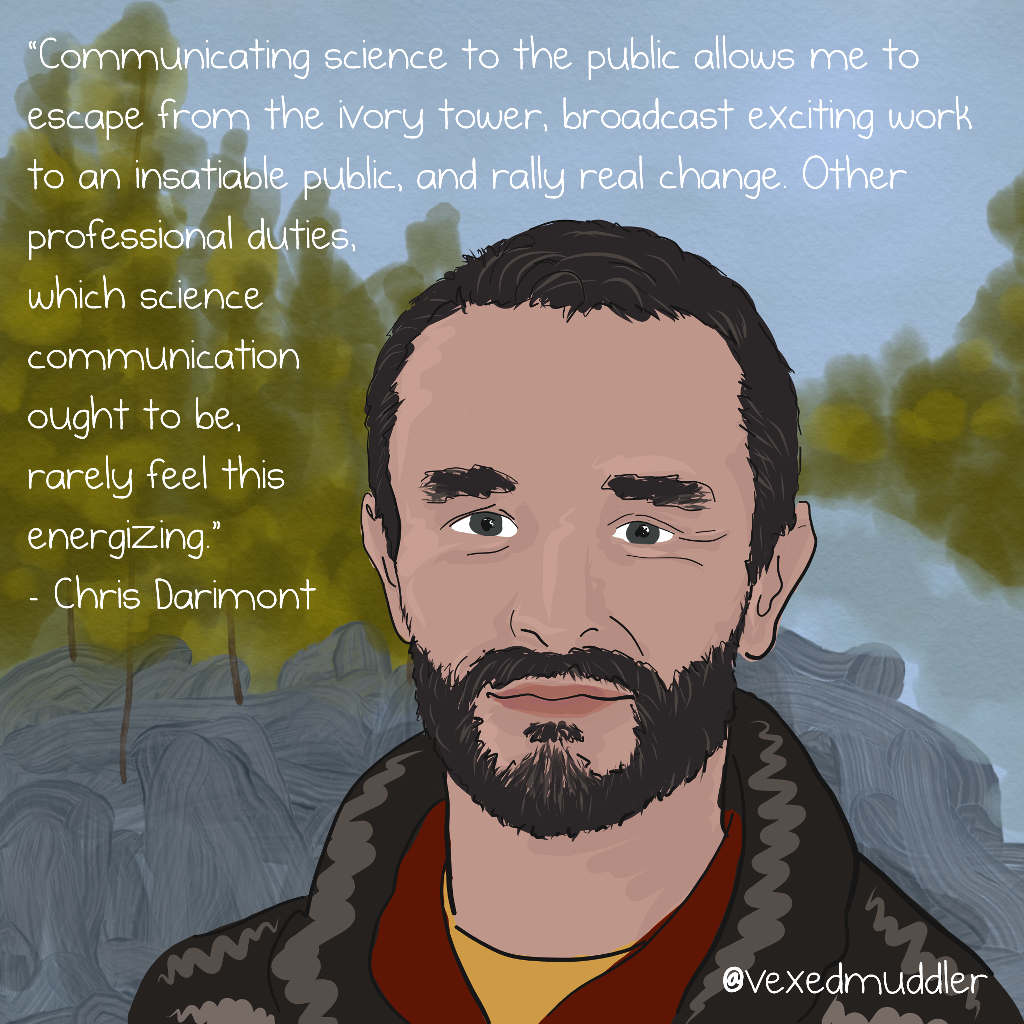 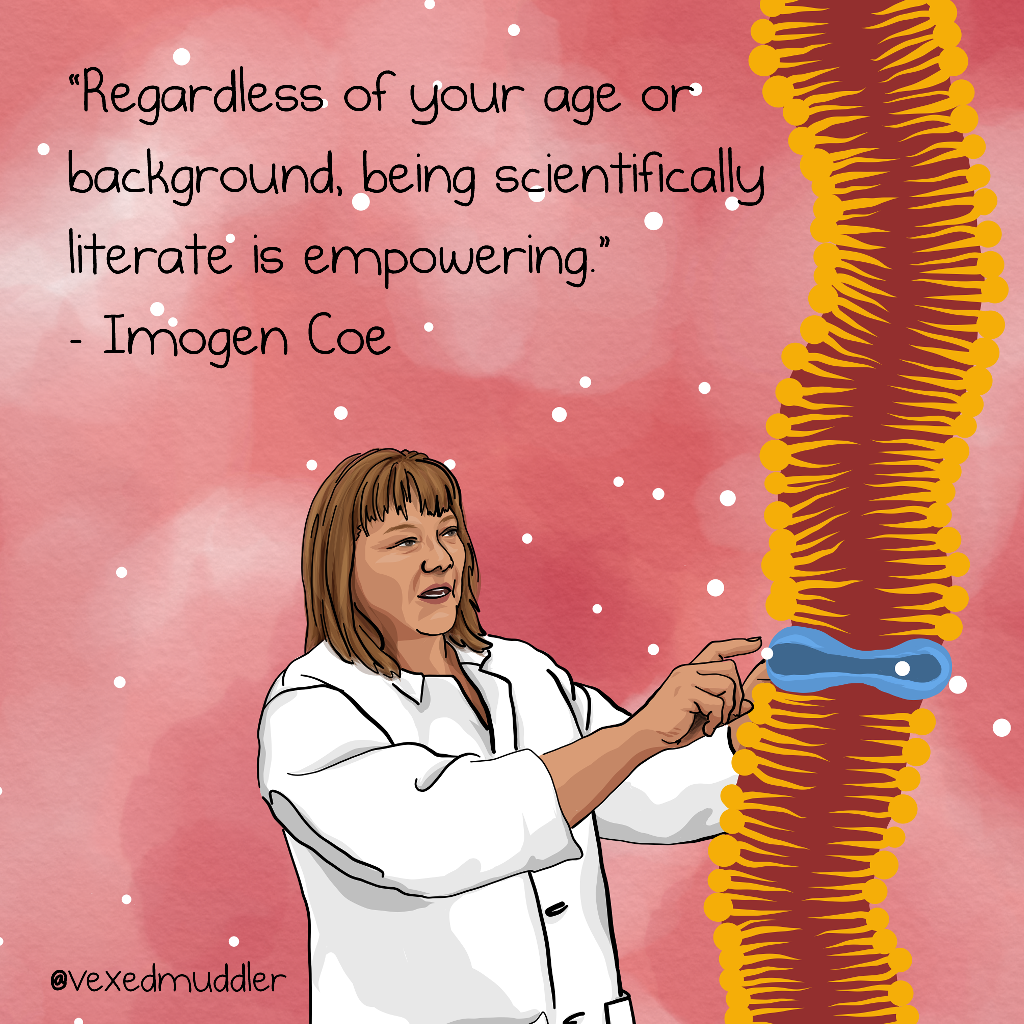 We couldn’t be happier with the response from the public. Some people shared their reflections online, while others contacted us directly in the hopes of being included in next year’s project. There were online discussions on the role of scientists in science communication, and each of our quotes was shared widely on our social media platforms. The reflections and conversations that this project has sparked are a hopeful sign that there is a strong Canadian science culture that involves all members of the public.

There is a strong Canadian science culture that involves all members of the public.

Parents and teachers: Want to get kids excited about science? Check out all the amazing posts in the #scicomm100 hashtag stream. https://t.co/jMAKNz4Vz6

Congrats! on being part of #scicomm100 & getting the word out that biodiversity conservation can start at home https://t.co/0OR6kvGeXp https://t.co/vO5ce9f4bD

"Science underlies everything we do" – check out all the inspiring #scicomm100 quotes @ScienceBorealis @ShoichetLab https://t.co/XDNZUfcDt2

Follow #scicomm100 for great examples of why science-based decision making and strong science communication are important.

As a result of this project, we’ve made new connections with people and groups across the country who are interested in science communication and science literacy. We plan to build on these connections with future initiatives. We also hope that these quotes will continue to inspire people, by helping refine science communication skills and projects, influencing policy, and helping shape careers and worldviews.

We hope you’ve enjoyed the project as much as we have. You can browse the full quote gallery here, or check them out on Twitter (see also #scicomm100) and Facebook accounts to join in the conversation and share them on social media. Check out our brand new Instagram account, where we’ll be re-sharing the quotes to reach a broader audience.

We’ve also launched an online store where you can purchase some of your favourite quotes on mugs, as prints, or even in calendars. Not only will you have daily reminders of this inspirational project, but you’ll also help support Science Borealis’ mission to highlight great Canadian science communication. You can also purchase Science Borealis logo gear at our shop.

We’re hoping to do this again in the future, so send us your nominations of people to include in the next edition!