Wildlife tracking is one of the many fun nature activities you can take part in. One of my favourite pastimes is pointing out something to a friend or family member that they may have never noticed before, especially something left behind by species living in the area.

These may be more glamorous ways of tracking animals, but, personally, there’s nothing like crouching down beside feces and yelling, “Look! Deer poop!”

The truth is, everybody poops, including the wildlife in our forests. We call it poop, but in the wild, it’s called scat. 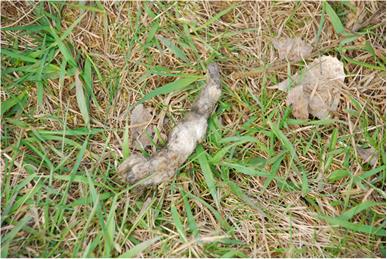 It’s important to note that you should never handle scat with your bare hands, as it could contain parasites or diseases that are dangerous to humans.

Scat is a great way to identify a species and, in some cases, what that species ate before leaving a little present for you to identify.

Learn more with this mammal identification and tracking guide.
Having a general idea of what species live in the area and what they eat is a good start to deciphering scat. This is especially helpful with large mammals as their scat is typically bigger.

A common forest dweller across Canada, the red squirrel can be found specifically in boreal coniferous and mixed forests.

Grey squirrels prefer deciduous forests and have a range throughout southern Manitoba, Ontario and Quebec.

Both are omnivorous and feed on seeds and berries, but will occasionally eat eggs, birds, mice and insects. Red and grey squirrels’ scat is similar – smooth ovals measuring 0.5 to 1 centimetre in length. 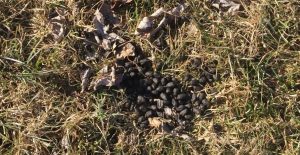 This species lives primarily in southern parts of Manitoba, Ontario, Quebec and New Brunswick, and was introduced to BC in the 1950s and ’60s. Eastern cottontail rabbits are herbivores and have a diet that includes grasses, and, in winter, seedlings and bark from trees and shrubs.

This species’ scat is formed into small, almost completely round pellets. Larger piles indicate that the species was eating or resting at the spot for a long time.

Not too big, not too small

Beavers can be found across Canada, in lakes, ponds and rivers that have access to woody vegetation. They are herbivores and will consume bark from trees, such as aspen, willow and birch, aquatic plants and grasses.

Their scat is hard to see, since they usually poop in water. If you do catch a glimpse of evidence from this elusive pooper, then it will look similar to what it eats – wood. The small droppings have a texture resembling sawdust.

Porcupines aren’t picky when it comes to the kind of forests they live in. They will occupy different types of forests across Canada, and can sometimes be seen sleeping in treetops.

Porcupines are herbivores, but make sure you keep your shoes on your feet next time you’re in the forest. This species loves salt and will eat materials (such as socks) salty from a day of hiking.

Their cashew-shaped scat can often be found in large piles near their den sites in rock piles, caves and hollow trees.

Raccoons can be found in most parts of southern Canada. Depending on their surroundings, racoons will eat a wide variety of things – from frogs, to the trash in the garbage bin outside your house.

Although they’re not picky when it comes to what they eat, if water is available nearby, they will often clean the food before eating it.

Their scat, like their diet, varies greatly. It can be anywhere from red to yellow to black, depending on what was for dinner. The ends of their scat are very blunt and are typically squared-off at both ends. It is extremely dangerous to handle their feces, as it contains a parasitic roundworm.

This species can be found across Canada, east of the Rocky Mountains. They are herbivores and their diet is dependent on the season. In winter, it eats leaves and twigs from trees and shrubs. And in spring and summer, it eats mostly grasses. 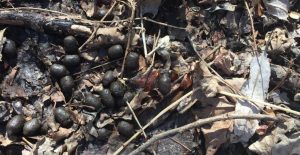 Similar to the eastern cottontail rabbit, white-tailed deer poop is in pellet form, with a diameter of up to one centimetre. Their scat is a little longer than cottontails’ though, measuring up to 4.5 centimetres in length, and oval-shaped.

Red fox can be seen in open areas in every Canadian province and territory. They are omnivorous and eat small rodents, berries, eggs, fruit and birds.

In the winter and spring, small pieces of hair from their prey can be seen in their scat. In the summer, the scat is often lumpy with fragments from fruit and berries. 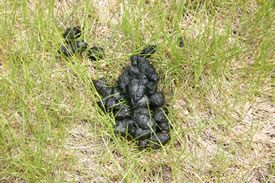 Black bears live in forested areas in all of Canada’s provinces and territories, except Prince Edward Island. They are omnivorous, primarily eating berries, nuts and insects, but will sometimes feast on fish, small animals and birds.

They have the third-largest scat of all mammals in Canada (after moose and bison), weighing around half a kilogram or more. It is possible to see nuts, seeds, hair, bones or leaf fragments in their scat.

So next time you’re in the forest, keep an eye out for what a species may have left behind.