The discovery of one of the long-lost Franklin ships is surely big news, archaeologically speaking. But it is also highly political. Not simply because Franklin is used as a symbol of Canadian sovereignty in the Arctic, but also in the context of what has happened in recent years regarding federal science. 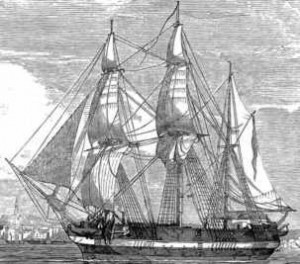 One of the ships of Sir John Franklin’s last expedition (Erebus or Terror), in 1845 (Public domain image)

As Quebec science journalist ValÃ©rie Borde reminds us on her blog, Parks Canada – whose researchers discovered the John Franklin ship – has suffered significant cuts over the past two years. It’s annual budget has dropped from $651 million to $612 million, with the number of employees cut from 4511 to 3972. Borde quotes the Canadian Archaeological Association, the Canadian Historical Association, and the Commissioner of the Environment and Sustainable Development, which all raised concerns about this situation. Earlier this year, Parks Canada was even limiting its hours of service to Parks visitors.

Other journalists and columnists have also underlined this odd situation: Tim Harper in the Toronto Star wrote about “the boyish glee with which Prime Minister Steven Harper announced the find,” and the Globe and Mail editorial team analyzed this discovery as “an example of [this] government’s selective embrace of science.”

“The Harper government that boasts of spending millions to find the Franklin ship is the same one that cancelled the $2-million annual funding for the Experimental Lakes Area in 2012…This is also the same government that stopped funding to a foundation that supported a High Arctic atmospheric research laboratory doing critical long-term research on climate change.”

Unfortunately, newspaper editorial writers can, at best, write about science policy only a few times a year. But what about science bloggers?

Beyond these three items, there is much room to explore a range of science policy-related topics, such as the basis of archaeological projects (a 1990 Archaeological Heritage Policy Framework sheds very little light on the matter, but a news release from Minister Aglukkaq offers a few hints related to history, safety and security, research and technology, and the support of Arctic communities); or, how such efforts engage other stakeholders (see a list of partners here, which includes the Government of Nunavut, but also Shell Canada).

Thus, once again, a Canadian “scientific” discovery marks the starting point from which to investigate important policy topics such as priorities in research, financing, heritage conservation, nature conservation… And about the future of all of those topics – or their uncertain future, as ValÃ©rie Borde concludes: