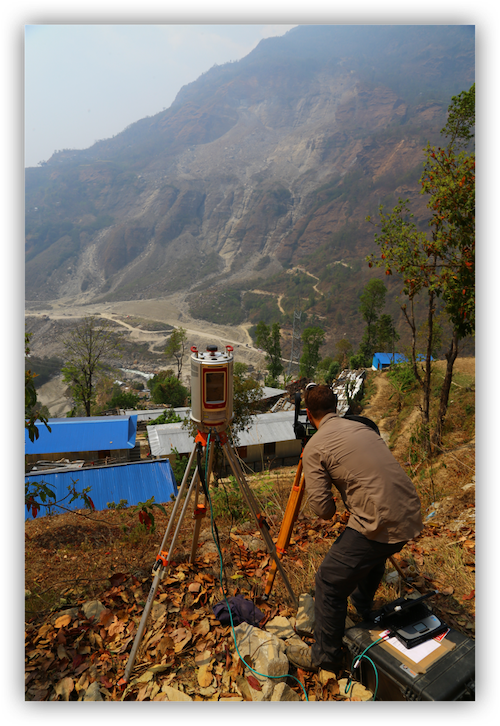 Jesse Mysiorek conducts fieldwork on the Jure, Nepal landslide with state-of-the-art remote-sensing equipment. The landslide can be seen two kilometres down the valley.

Early in the morning of August 2, 2014, part of a mountain collapsed in Jure, Nepal, about 70 kilometres northeast of Kathmandu. Some 5.5 million cubic metres of rock and debris – equal to the size of Grouse Mountain, north of Vancouver, BC – tumbled down into the Sunkoshi Valley, killing over 200 people, destroying two dozen homes, and completely wiping out the Arniko highway. It also dammed the Sunkoshi River for about a month. Water backed up behind a 55-metre-tall pile of rock, creating an ever-growing lake that submerged dozens of houses and a hydropower station.

My name is Jesse Mysiorek. I’m pursuing a master’s degree in engineering geology, specializing in slope stability analysis, at Simon Fraser University in Burnaby, BC. However, for my thesis project, I’m currently undertaking research in both Nepal and at the university campus to determine why, how, and when landslides like the Jure slide occur.

By applying state-of-the-art scientific remote-sensing techniques and traditional geological methods at the Jure landslide that have been integrated into a new kind of geodatabase, I have been able to better understand why the mountain broke away in 2014 and gain insight into the mountain’s future stability.

I use a wide range of remote-sensing tools to study slope stability. In the photograph below, you can see me interacting with a hologram of 100-metre-high rock cliff at the Jure, Nepal, landslide. The hologram is part of a large holographic Jure landslide geodatabase that I am developing. In addition to holographic maps from the Jure region, the database includes information from GIS, rockfall modelling, change-detection, mitigation, rock samples collected, and GPS field locations.

The technology I’m using is called mixed reality. Unlike virtual reality, which generates virtual objects such as computer-graphic simulations and fully immerses users within a digital or virtual environment, mixed reality presents the real world and virtual-world objects (holograms) together. It allows users to see both the world around them and the holograms simultaneously, in real time. It also allows people to add digital elements to their actual environment. 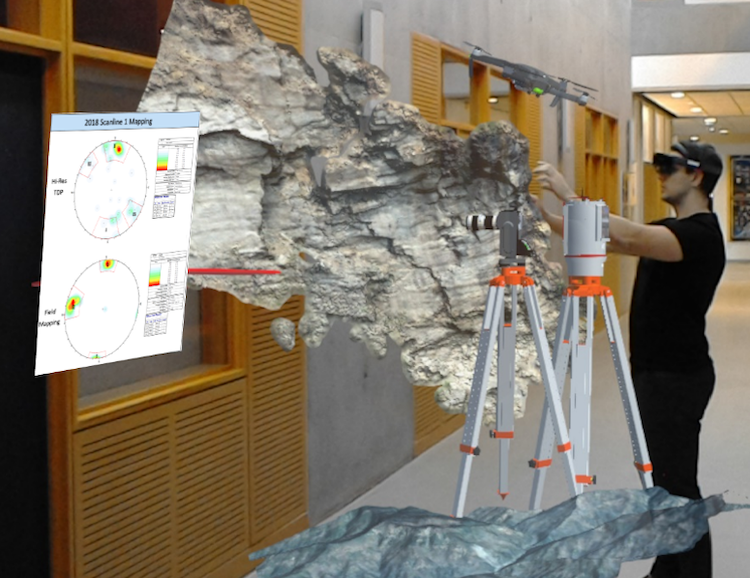 Geologists can interact with the mixed reality holographic landslide database to assess landslide risk. The rock cliff shown here represents the landslide slope above Jure, Nepal, and is about 100 m high in real life; the red line indicates where the author conducted March 2018 fieldwork. Remote-sensing equipment is also displayed as interactive holograms within the mixed reality tool.

The purpose of mixed reality is to enhance the user’s ability to communicate information. Traditional media, such as written reports, computer images, and so on, are limited in the amount and type of information they easily convey. Mixed-reality technology, however, creates an immersive environment in which users can show results and conduct mapping and analysis with multiple users at the same time. It also collects, within a mixed-reality app, all the information to be shared – much like a video game does, allowing users to walk around and interact with any element in the mixed realm.

In my research, mixed reality allows me to interact by way of holographic representations with the steep, dangerous rock slopes of the Jure slide site while I’m standing safely in the office. Using the system, I can project all the data that is on my computer, including analyses and results, into the mixed-reality setting. I can map rock outcrops into the system, link multiple engineers into the hologram to communicate or map information, and see all my GPS locations as if I were in the field. If I click on any location in the hologram, the system flies me into it as if I were onsite in Nepal.

It is very accurate and always stays georeferenced. For example, if I can map the slope to see how steep it is and in what direction it faces, and it will always face that correct location. However, I can also move the models around without reference to orientation or size, if I select that option from the menu.

The interface that makes this possible is Microsoft HoloLens goggles.

In order to make the database and mixed-reality system accurate and useful, I need to ground-truth my data. Although I’m using remotely sensed data collected via, for example, laser scanning, photogrammetry and unmanned aerial vehicles to create the 3-D slope representation models, they still need to be verified with information that can be obtained only through traditional field-geology methods that require me to physically touch and walk on the landslide and rock outcrops.

I’m in Nepal to get that field information.

While researching the Jure landslide and mountain, I noticed that historical satellite imagery captured before the 2014 slide showed that the slope had been slowly breaking apart since 2000. The mountain was showing signs even then that the slope was failing. 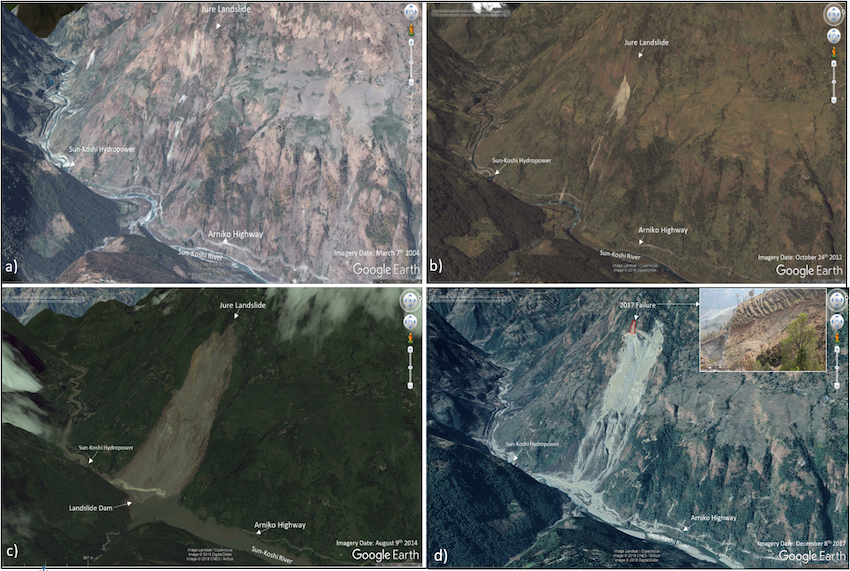 Had anybody noticed and accurately interpreted the signs at the time, could the landslide have been prevented? Unfortunately, there was no way of holding the entire mountain up.

However, if the signs had been identified beforehand, the people living near the mountain could have been warned and educated. Residents, businesses and the government may have been able to prepare for an eventual collapse, which might have helped to mitigate the damage and save lives.

If a landslide happens once, will it happen again?

The problem with landslides is that nobody really knows what causes them. Because of this poor understanding of the risks, people continue to live near hazardous areas, increasing public-safety risks. Despite the Jure landslide’s size and the loss of life and damage it caused in 2014, little geotechnical work has been done on the mountain to understand its future stability.

My work to combine remote sensing techniques and traditional geological methods at the site into the mixed reality geodatabase has provided some insight into the processes and conditions that led to the slide and the likelihood of it happening again.I have also determined a way to provide early warning of future signs of instability and another part of the mountain giving way.

A potential solution is to apply low-cost monitoring systems at the top of the landslide at areas identified as hazards and apply barriers, divert surface draining away from the landslide, drain and reduce groundwater pressure, and divert dangerous future landslides and rockfalls from communities and infrastructure.

In the future, this research into the why, how and what’s next of landslides and the use of mixed reality to explore slope stability in areas of concern may provide a new and effective technique for understanding and predicting landslides.

Scientists will be able use the technique to analyze, interpret and communicate research results to audiences, including academia, government officials, consultants and – most importantly – the residents of communities in potentially hazardous areas.

Simon Fraser University student Jesse Mysiorek wrote this post as part of Science Borealis’s Spring 2019 Pitch & Polish, a mentorship program that pairs students with one of our experienced editors to produce a polished piece of science writing.