In honour of International Cat Day, an occasion started by the International Fund for Animal Welfare in 2002 and held earlier this month on August 8, learn about the three wild cat species found in Canada.

The smallest of Canada’s three wild cat species, the bobcat got its name from its tail, which looks like it’s been cut, or “bobbed.” The bobcat is about three times the size of an average housecat and is often mistaken for Canada lynx. Not only is the bobcat smaller than Canada lynx, but it also has shorter legs, a longer tail that’s black-striped and white-tipped, and smaller ear tufts.

Bobcats are found throughout North America, ranging from southern Canada to the United States and northern Mexico. They can adapt to many different habitats, including forests, swamplands, deserts and even urban areas.

Bobcats eat almost any type of prey, but typically feed on rabbits, birds, mice and squirrels. Despite its small stature, this feisty feline even hunts deer, which can weigh about 10 times more than itself. While mother bobcats are still nursing their kittens, they bring them live mice so that the kittens can hone their hunting skills. 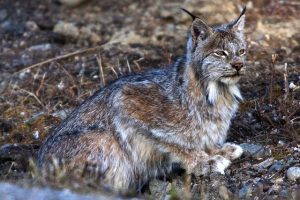 Canada lynx is Canada’s most widespread feline species – it can be found in intact forests of Canada and the U.S. Most of its global range occurs in Canada, and it is listed as threatened in the lower 48 states. They are often mistaken for bobcats, but they can be distinguished from them by the longer tufts of fur on their ears and longer back legs. This feline has large paws, and their toes spread out and function much like snowshoes, allowing them to hunt in deep snow.

Canada lynx is one of 25 species or landscapes that can be symbolically adopted through the Nature Conservancy of Canada’s (NCC’s) Gifts of Canadian Nature program, which contributes to critical conservation work across the country. Symbolically adopt a Canada lynx today. 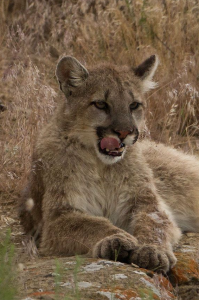 One of North America’s most powerful predators, the cougar is the largest wild cat in Canada. A male cougar can measure up to two metres in length and weigh more than 90 kilograms. This feline has the largest range of any land mammal in the western hemisphere, ranging from Yukon to Argentina. It is extirpated (locally extinct) from most of eastern North America but appears to be slowly returning to some parts of its former range.

These nocturnal predators can kill animals four times their size. They have even been observed preying on marine mammals along Canada’s West Coast! After making a kill, cougars often bury the carcass, returning to it later for more meals.

One thought on “Wild cats of Canada”