In a Toronto Star opinion piece published on August 12, Katie Gibbs and Alana Westwood of Evidence for Democracy called for a national science debate between federal political leaders. Librarian John Dupuis echoed Evidence for Democracy’s sentiment in a recent blog post, and began brainstorming potential science-related debate questions. While the major Canadian political parties have addressed many issues since the August 2nd election call – foreign policy, the economy, and the middle class – the state of Canadian science has been largely absent from these debates.

Ultimately, the first step is that a passionate group take the lead in organizing a science debate. 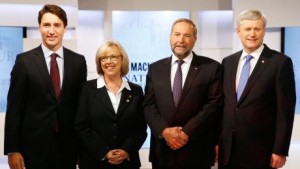 Leaders of each of the Canadian political parties (Photo from @CBCPolitics).

There is a precedence for such an event. QuÃ©bec hosted three science-focused debates between local candidates during the 2008 and 2012 provincial elections. The idea for these debates came from the 2008 Science Online conference in North Carolina. At the conference, two QuÃ©becois science journalists from the non-profit Agence Science-Presse (including the co-author of this post), listened intently as their American counterparts described a then-nascent initiative called Science Debate – a simple, ambitious petition asking for a debate between the US presidential candidates.

The most intriguing aspect of the story was that Science Debate was the initiative of a coalition of science bloggers. By the summer of 2008, their petition had garnered more than 38,000 signatures, plus the support of all of the main professional science associations. There was unfortunately no US presidential science debate, but the idea was out there and a list of questions was sent to the candidates.

A few weeks later in QuÃ©bec, the blog Je vote pour la science was born. In December of that same year, a group of volunteers in Rimouski, a city of 45,000 people, answered the call and organized a debate between local candidates in the upcoming provincial election. Je vote pour la science also became a weekly radio program, now broadcast on seven community radio stations across the province.

Four years later, during the 2012 provincial election, there were two science debates. The debate in Sherbrooke was organized by science students at the UniversitÃ© de Sherbrooke, while the debate in MontrÃ©al was arranged by a coalition of organizations including l’Agence Science-Presse and l’Association des communicateurs scientifiques du QuÃ©bec (the French-speaking equivalent of the Canadian Science Writers’ Association).

Could we organize a science debate in a Canadian city for the 2015 election? All an intrepid group would need is an auditorium, a small committee to write the main questions, and a few dedicated volunteers to contact each political candidate. While the party leaders may decline, local candidates may heed the call.

While Canadian science bloggers have begun to discuss the issue of a science debate, there remain relatively few outlets taking up the cause. In addition to developing potential science debate questions as noted above, John Dupuis has compiled an excellent list of science mentions during the electoral campaign to date. Evidence for Democracy is promoting a science pledge, which has been signed by some NDP, Liberal, and Green candidates (note that, as of August 26th, no Conservative candidate has signed). The Professional Institute of the Public Service of Canada (PIPSC) has proposed 10 questions you should ask your federal candidates and 10 things the next government should do, while a group of university student associations from across the country wrote a letter, published in La Presse, engaging candidates in a discussion of university research support.

The US experience with Science Debate, and the 2008 and 2012 QuÃ©bec elections, show that science bloggers can be quite powerful. You have a voice, you have a platform, and you have an audience. You even have a network – Science Borealis. With seven weeks remaining until election day, there is still time to ensure that Canadian science gets the coverage it deserves during the election campaign. Now, it’s up to you.

2 thoughts on “Will there be a science-focused debate during the 2015 election campaign?”