Have you ever been told that you should be careful about how much tuna you eat? Part of the reason why is bioaccumulation, which is when the level of certain toxins (for example, DDT or mercury) increases in concentration in the bodies of organisms as you go higher in the food chain. 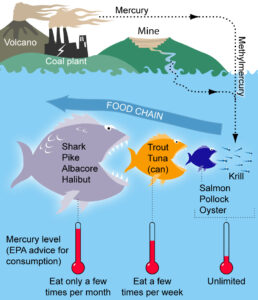 Visual representation of how mercury moves around in the environment. Image by Bretwood Higman, Ground Truth Trekking, CC BY 3.0 via Wikimedia Commons

We can understand how bioaccumulation works using an example of mercury in an aquatic food chain, which begins with plankton absorbing mercury from their environment. The amount that they take in is not enough to harm them, but they are taking it in faster than it leaves their bodies. As you go higher and higher up the food chain to organisms that eat plankton, then organisms that eat those organisms, each level will be consuming higher levels of mercury because all the mercury in their prey adds up. By the time the mercury reaches the fish at the top of the food chain, the increase in concentration means it may be much more toxic. Some examples of predatory fish that are high in the food chain and thus may contain increased levels of mercury include tuna, swordfish, and sharks.

How does bioaccumulation of mercury affect humans?

As humans are a top predator, bioaccumulation of mercury can have serious effects on human health. Unfortunately, it is very difficult to get rid of mercury in meat because it accumulates in the muscle tissues, binding to sulfur, and you can’t cook it out. Some of the concerning health effects include cognitive impairment as well as cancer. Pregnant women are especially high-risk, due to the possibility of neurological impairment in fetuses as well as future impairment in the child’s motor skills and attention. How severely a person is affected can depend on a variety of factors, including how often and in what quantity the mercury was consumed.

Dr. Gretchen Lescord studies bioaccumulation in freshwater environments and fish. She is an environmental scientist at the Wildlife Conservation Society Canada, as well as an Adjunct Professor at Laurentian University, in the School of Biology, Chemistry and Forensic Sciences. She notes that another factor influencing toxicity is the form the contaminant takes. She uses chromium as an example. Chromium in its hexavalent form is very carcinogenic and should absolutely be avoided, while trivalent chromium is considered pretty much harmless, and may even show up in multivitamins.

Dr. Lescord’s research focuses on two main areas: the impact that different forms of freshwater contaminants have on the ecosystem, and what drives the variation in contaminant concentrations. That variation could be due to characteristics of the fish (like age, diet, or trophic position), or characteristics of the lake itself, including the depth of the lake or any disturbances to the watershed. This research is important for understanding the environmental impacts on lakes and ecosystems at large in areas that are expected to have disturbances, like a road being built.

Various labs are looking at marine bioaccumulation in Canada, many of them based at Laurentian University in Sudbury. They are interested in understanding the trends of mercury concentrations in various fish in northern Ontario and how the food web and ecosystem changes can affect the mercury levels in fish. Scientists are currently examining long-term trends in aquatic environments in the Canadian Arctic. They seek to better understand the variability in mercury concentrations between lakes, how the thawing of the permafrost layer is influencing mercury deposition in the environment, and where we are seeing stable or increasing levels of mercury in fish.

Aquatic bioaccumulation has been concerning in the Arctic regions. Some research has found that, due to climate change, there may be an increased influx of mercury in the region. This could be due to an increased movement of mercury in the ecosystem, which can increase uptake by organisms. The food web in the Arctic has been shifting due to climate change, which may also be contributing to the increased mercury found in some animals, such as ringed seals. However, this is an area of study that needs more research to better understand what is happening. 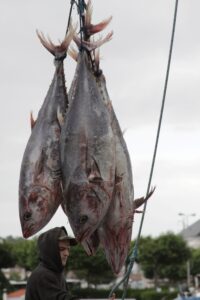 Health Canada regulates the levels of mercury permitted in fish sold in the country. It is a two-tiered system, as some fish have higher levels of mercury overall but are less frequently consumed by the general public. For most commercially sold fish, the highest permitted level is 0.5 parts per million (ppm). However, for fish that consume other fish, like tuna, swordfish, and sharks, the permitted level is 1.0 ppm, as it is assumed that most people eat these types of fish much less frequently. The Canadian Food Inspection Agency (CFIA) regularly monitors mercury levels, and if the fish do not meet regulations, they cannot be sold.

Resources to learn which fish to watch out for

For avid sport fishers, it is important to understand which fish are and are not safe to consume. This can vary based on the age, the size, and how much of the fish you consume. Generally, most fishes have been found safe to eat. However, the walleye is one to keep an eye on, as it has high mercury levels compared to many other sport fishes. The Canadian Government publishes consumption advisories for each province, which link to resources created by each province, so that sport fishers can educate themselves on which fish they can safely eat.

Overall, Dr. Lescord emphasizes that we should not be afraid to consume fish, as they are an important source of protein and fatty acids, and the contaminant concentrations typically found are relatively low. As with everything else, it is important to educate ourselves and balance the risks against the benefits.