To celebrate Earth Science Week, we’ve rounded up our top ten earth & environmental science news stories from the past year. We know we haven’t covered them all, so add your picks in the comments!

When Philae, the Rosetta Mission’s robotic lander, signalled touchdown on Comet 67P/G-C last November, it marked the first time in history that a space probe successfully soft-landed on a moving comet. However, Philae came to rest in a spot with limited exposure to sunlight and was forced into hibernation, as its solar panels were unable to recharge its batteries. Despite concerns about Philae waking up again, the lander was able to connect with the Rosetta craft several times this past summer, much to the glee of mission scientists and space enthusiasts. Results from Philae’s initial investigation of the terrain and composition of this hard as ice comet have revealed the presence of a number of organic compounds, including some that have never before been detected on a comet. The Rosetta spacecraft is the first ever to orbit a comet’s nucleus, faithfully monitoring the comet’s evolution during its closest approach to the Sun this past August. Although Philae has been silent since mid-July, scientists and engineers hope to try and have it call home again towards the end of October 2015.

Kimberly Moynahan at Endless Forms Most Beautiful blogged about the six lessons we can learn from the Philae lander saga, while Jean-Pierre Urbain at Agence Science-Presse blogged about the research program itself. Sketchy Science added their two cents with an excellent series of images showing ‘why the Rosetta mission is the most impressive thing ever.’

When NASA’s New Horizons spacecraft left Earth almost a decade ago, Pluto was still classified as a planet and the mission was set to be the first dedicated exploration of the farthest edge of our solar system. Despite changes to the definition of a planet by the International Astronomical Union (which saw Pluto reclassified as a dwarf planet), the first images sent back by the New Horizons fly-by on July 14th, 2015 – including a heart-shaped mark on Pluto’s surface – received extensive media coverage and created excitement around the globe. Given the amount of data collected during the flyby and slow downlink rates of about 2 Kbps, scientists estimate it will take up to 16 months to receive all data. In the meantime, however, detailed images of Pluto, its geology and colourful atmosphere, its moon Charon, and most recently its smallest moon Styk, are revealing more about the Pluto system than we have ever known. Once New Horizons completes its Pluto encounter early next year, it is hoped the mission will be extended to study other objects in the Kuiper Belt. 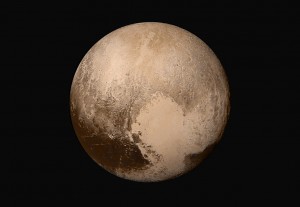 As Canadian science journalist Ivan Semeniuk reported in the Globe and Mail, it was a Canadian map of the stars from the Canada-France telescope in Mauna Kea that helped guide New Horizons to Pluto. Science World (Vancouver) blogged about the New Horizons mission, while our Physics & Astronomy subject editors (Jared Stang and Steph Taylor) included New Horizons in their weekly blog roundup. Dirk Steinke at DNA Barcoding also posted Greetings from Pluto.

Since the beginning of the space age, humans have used everything from spacecraft flybys, to orbiters, landers, and our recent army of rovers to explore Mars. Using data collected by the Mars Reconnaissance Orbiter (MRO) launched from Earth in 2006, NASA recently announced their strongest evidence to date of intermittent water flow on the planet’s surface. Dark streaks that appear to grow and contract depending on temperature have long been documented on the Martian surface, but Mars’ cold temperatures and low atmospheric pressure meant it was unlikely to be pure liquid water. This led scientists to hypothesize these recurring slope lineae (RSL) might be brine flows, containing sufficient amounts of salt to decrease the freezing point of water. Although examination of previous Mars data was inconclusive, targeted analysis of specific RSL sites plus analysis of spectral data from MRO’s onboard spectrometer found hydrated salts appearing to consist of perchlorates and chlorates. The presence of these brine flows has exciting implications for the ongoing search for microbial life outside of Earth, and the planning of future human missions to Mars.

Although it has been over 60 million years since dinosaurs roamed the Earth, evidence of their prehistoric existence is still met with thrill and awe. Canada, in particular, has proven to be an excellent place to study dinosaurs, with over 90 species found deep within our geological past. In 2015, a new dinosaur named Wendiceratops pinhornensis was introduced to the world, named after Canadian dinosaur hunter Wendy Sloboda, who discovered the bonebed site in the Pinhorn Provincial Grazing Reserve of Alberta. Predating its well-known relative Triceratops by about 13 millions years, Wendiceratops is one of the oldest members of the horned Ceratopsidae family. A vegetarian that was approximately the size of a hippopotamus, with a unique ornamental shield, its discovery reveals a diversity among such horned dinosaurs that offers more information about the evolution of these animals and the Cretaceous world.

A Canadian Science Publishing blog post by David Evans, one of the lead palaeontologists on the paper describing the dinosaur, discussed the importance of the find in detail. Victoria Arbour at Pseudoplocephalus blogged about seeing the original Wendiceratops skeleton at the Royal Ontario Museum, while our Science in Society editor, Kimberly Moynahan, included Wendiceratops in her July dinosaur post. 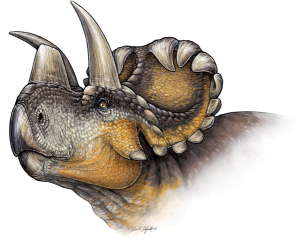 Photographs of last month’s Supermoon Lunar Eclipse flooded social media, as people delighted in a phenomenon not seen since 1982. A Supermoon describes the instance when a full moon appears larger and brighter on Earth because it coincides with its closest approach to Earth, called the perigree. A lunar eclipse occurs when the Sun, Earth, and Moon are aligned and the Moon travels behind the Earth into its umbra, the darkest part of the shadow. The Moon will often appear red, orange, or gold during this time because the sunlight that reaches the Moon’s surface is scattered through the edges of Earth’s atmosphere. The next Supermoon lunar eclipse is not expected until 2033.

On April 25, 2015, the Nepal region experienced a magnitude 7.8 earthquake, with hundreds of devastating aftershocks greater than magnitude 4. Over 9,000 people were killed and more than 23,000 injured; many more were left homeless by the disaster. Researchers and aid agencies worldwide worked to help the country manage post-earthquake hazards and recover from the disaster.

Speaking Up for Canadian Science highlighted two instances of Canadian science assisting with the Nepal relief effort: studies of what caused the earthquake, and the use of 3D images to help relief efforts. Many Canadians were in Nepal at the time of the quake, and while some were able to lend a hand to the relief effort, others sadly never made it home.

Algal blooms are a major environmental hazard, as the cyanobacteria present in a bloom create toxic microcystins that require complex drinking water treatment, and make swimming unsafe. In 2015, algal blooms in the Great Lakes were predicted to set records, second only to the record blooms seen in 2011. However, it appears that while the Lake Erie bloom was geographically extensive, it wasn’t as toxic as previous blooms.

The Nature Conservancy of Canada wrote about Lake Erie â€“ and its problem with algae blooms â€“ on their Land Lines blog. They noted that while some of the bigger issues in Lake Erie have been solved (e.g., oil slicks and contaminants), nutrient runoff that contributes to algal blooms remains a major issue. 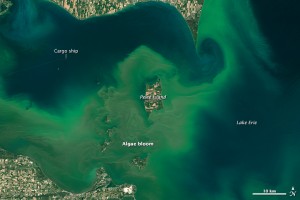 These two phenomena have been widely reported on in the media, and are responsible for a range of climatic and biological impacts. On the Pacific Coast, the warm blob was first observed in 2013 but reached its maximum extent this year. It has resulted in an unprecedented algal bloom, the movement of aquatic species to more northern regions, and an unusually warm and dry summer on the west coast. The cold spot in the North Atlantic was first observed this year, and the surrounding region saw the coldest winter on record.

We wrote about both of these processes on the Borealis Blog, to coincide with Earth Day 2015. Our oceans are important to all of us not only for the resources they provide, but for the impact they have on climate. 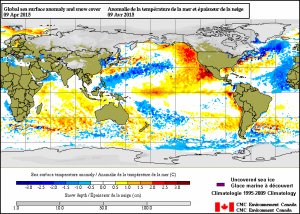 Sea surface temperature anomalies in the Pacific Ocean in April of 2015 show the warm blob along the coast of North America (image from Environment Canada).

Last summer, craters on the scale of hundreds of metres wide began to appear, seemingly out of nowhere, in the tundra of Russia’s Siberian region. While researchers initially noticed only one, they quickly counted over seven in one area, plus another large crater surrounded by at least 20 smaller craters. They are suspected to form via the explosion of methane gas released by melting permafrost â€“ which means more could form as the permafrost continues to melt.

The dynamic duo at Sketchy Science wrote a post about sinkholes (though not these particular kind), with lots of great diagrams showing how sinkholes can develop.

The ongoing drought in California dominated the news media this year with stories of drought-caused wildfires, changes in water rights, land subsidence due to increased groundwater pumping, and more. This year, drought conditions spread to Washington, Oregon, and into western Canada. While there is some hope that the coming El NiÃ±o will reduce the water deficit at least in southern California, it also comes with the risk of landslides and debris flows, and there’s no guarantee that northern California will receive enough precipitation to offset the drought.

Watershed Moments blogged about the dry conditions in Western Canada, and the implications for what we might expect under future climate conditions. This is a story we’ll be watching over the winter, as the El NiÃ±o forecast means another low snowpack and potentially dry conditions again next summer.

That’s all from us for Earth Science Week – be sure to add your suggestions in the comments and share your #EarthScienceWeek activities via Twitter and Facebook!