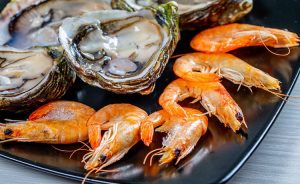 King shrimp and oysters on a black plate. Photo by Marco Verch CC BY 2.0

As patio season approaches, people are anticipating their first meals in the warm sun. Raw oysters, grilled salmon steak, or creamy seafood linguine are just a few of the tasty dishes Toronto restaurants may serve. These examples all featurefish and seafood ingredients that form part of a multi-billion dollar industry in the Canadian economy. But as a consequence of climate change, these organisms are struggling to survive in their changing environment putting Canada’s fishing industry at risk.

In 2016, commercial fisheries in the Atlantic region alone generated almost $2.95 billion in fresh- and saltwater landings, 87 per cent of Canada’s total value ($3.38 billion) for that year.

However, these bountiful harvests may be in jeopardy. Human induced climate change can damage ocean ecosystems in two ways: ocean warming due to rising temperatures and ocean acidification due to increased volumes of carbon dioxide dissolving into the water. As the consequences of climate change worsen, we may see a decline in the populations of the organisms we harvest, leading to a decrease in fishery revenue and the potential collapse of the ocean ecosystem. 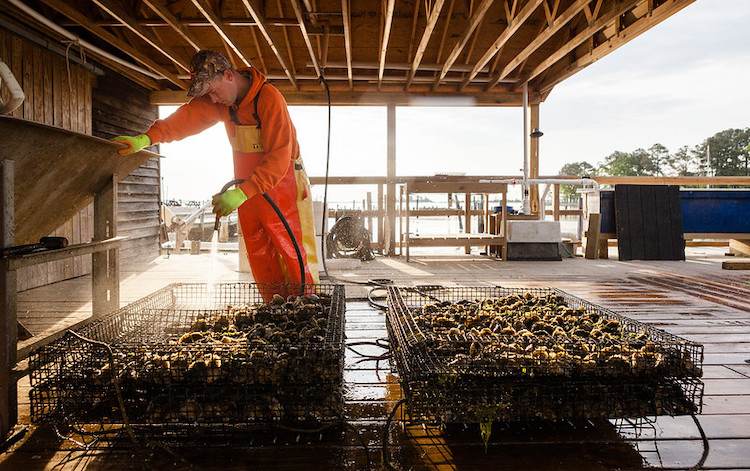 Within the ocean system, chemical reactions are constantly occurring, maintaining the balance of the molecules needed to support aquatic inhabitants. Carbon dioxide from the atmosphere naturally dissolves into the swirling waters, exchanging atoms with water molecules to form various chemicals such as carbonic acid, bicarbonate, carbonate and hydrogen ions.

Carbonate is an essential building block used by shellfish and other organisms to build shells and other structural components. The presence of hydrogen ions is also important as it determines the water’s acidity. The more hydrogen ions there are, the more acidic the water is and the lower its pH. 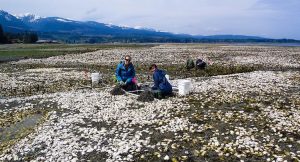 Research assistants set up an experiment at a Vancouver Island oyster farm. Photo by VIU-Deep Bay CC BY 2.0

Problems start when there is too much carbon dioxide present. Increased carbon dioxide in the atmosphere results in more carbon dioxide dissolving into the ocean, generating more hydrogen ions. Currently, oceans are absorbing approximately one-third of the excess carbon dioxide generated by human actions. In the past 200 years, the water has become 30 per cent more acidic and is forecasted to jump an additional 500 per cent by 2100 if no attempts are made to curb emissions.

Although lower pH values would not instantly kill aquatic organisms, a more acidic environment would make it more difficult for some organisms to survive, resulting in population loss. For example, excess hydrogen ions in the water can interfere with the shell building process, stealing away carbonate and disrupting the building of shells. Troubling signs of how acidification affects the ocean’s inhabitants have started to appear. 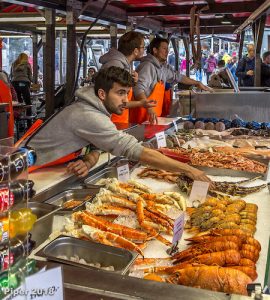 Shellfish may be harder to come by under climate change. Photo by PapaPiper, CC BY-NC 2.0

Some species of corals, which use carbonate to build their branches, experienced decreased growth in the presence of higher concentrations of dissolved carbon dioxide. Acidification can also interfere with the completion of growth spurts by coral and oyster larvae, preventing them from reaching adulthood. Shellfish such as mussels and clams may experience slowed shell building, leaving them vulnerable to predation, disease, and parasites.

Organisms without calcium carbonate shells can also struggle with the increasingly acidic conditions. Some species of fish experience physiological stresses in more acidic water, which interferes with their body chemistry and organ functions.

Some organisms with differing shell composition, such as lobster, crab, and shrimp, may be able to thrive under more acidic conditions. However, these species are in the minority and worsening conditions could be devastating for the ecosystem as a whole.

Although the waters on the Canadian Atlantic coast are acidifying faster than those in other regions, the Canadian fisheries still showed growth through to 2017. However, other regions within Canada have already started to show strain due to the changing conditions, implying a grim fate for the industry along the Atlantic coast if nothing is done now.

In the Pacific Northwest, oyster hatcheries have experienced die-offs because oyster larvae aren’t able to produce shells in the acidic water. Wild oyster beds in Canada and the US also experienced reproductive losses. The United States oyster industry along the Pacific coast is valued at $73 million, approximately 60 per cent of the fishing revenue for that region.

Although changing oceans may not affect us directly, these ocean ecosystems support major Canadian industries. We have put an essential part of our country’s economy at risk. As we risk depleting these food sources, communities along the Atlantic Canadian coast will lose fishery-related jobs. Almost 62,000 jobs were generated by the fishing industry in 2017 within the Maritimes, Quebec, and Newfoundland and Labrador. Even if ocean ecosystems can adapt, we may still lose the species that we eat.

So what can be done?

Fortunately, there are methods that can be used to counter ocean acidity. Buffering, the technique of introducing a basic compound such as sodium bicarbonate or crushed carbonate shells into the water to counteract ocean acidity, has increased once struggling shellfish populations along the Atlantic coast. Hatcheries such as the Taylor Shellfish Hatchery in Washington state have also turned to buffering the water to counter its high acidity with great success.

Coastal acidity can differ among regions due to pollution sources and nutrient run-off, leading to some marine ecosystems being smothered by carbon dioxide-producing algae. Selecting areas that wouldn’t be as prone to acidity for aquaculture or constructing artificial self-sufficient ecosystems could help reduce the deaths of organisms by increased acidity.

These preventative measures to counteract increasing ocean acidity are only temporary. Moving forward, we need to take a different approach with respect to the environment. The resources that we have relied upon for so long may begin to change whether we are ready or not. Our actions have consequences and we need to think about our oceans when we plan for the future.

One thought on “How ocean acidification might affect your next meal”