Today’s consumers want more from their food, and the beef and dairy industries are constantly striving to meet these demands. As more companies market their food as “natural” â€“ raised without additional use of hormones, steroids, and antibiotics â€“ concerns regarding steroid use in food production have multiplied. For example, A&W’s “hormone-free” beef guarantee and the increased grocery store shelf space dedicated to natural or organic foods demonstrate the market for alternatives to conventional practices.

Researchers at the University of Saskatchewan’s Western College of Veterinary Medicine have recognized this industry shift. In response, they are developing a new method of managing the reproductive cycle in cattle that allows farms to take advantage of reproductive technologies as well as markets that require cattle raised without steroids. Veterinarian and professor Dr. Gregg Adams is leading a project looking into a human cancer drug called letrozole that may prove to be a valuable tool in improving the cattle industry’s environmental and economic efficiency. 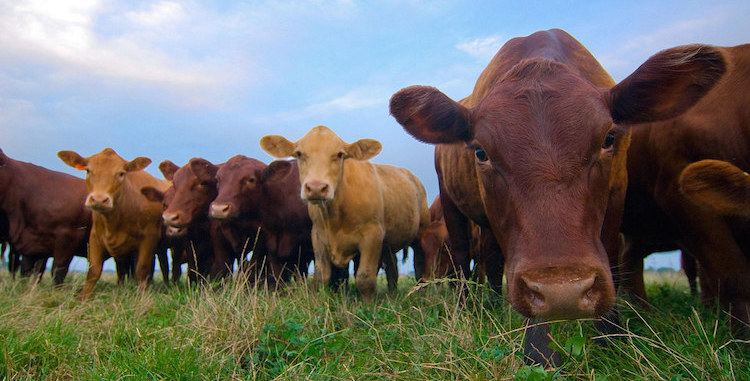 From cancer-fighting drug to fertility treatment

Letrozole comes from a family of drugs known as aromatase inhibitors. The drug prevents the conversion of androgens such as testosterone to estrogens such as estradiol, temporarily reducing the levels of estrogen within the body. In humans, it has been used for over 20 years to combat cancers stimulated by estrogen, including some forms of breast and ovarian cancer.

The ability to lower estrogen levels has applications beyond cancer therapy. A National Institutes of Health study discovered that letrozole also was effective in treating some conditions that cause difficulties with conception and pregnancy. This led doctors to begin using letrozole as a treatment for individuals struggling with infertility.

“Cattle display several of the traits seen in human reproduction, and serve as valuable models for studying ovarian activity,” Adams says. “We used these similarities to better understand the effects this treatment has on human ovarian function.” Dr. Adams’ research set out to better understand letrozole’s actions and impacts on human patients, as well as to see how it could be applied to cattle reproduction.

The research demonstrates how the University of Saskatchewan’s One Health Initiative, an approach to medicine based on an appreciation of the connections between human, animal, and environmental health, benefits us all.

A window on cattle reproduction 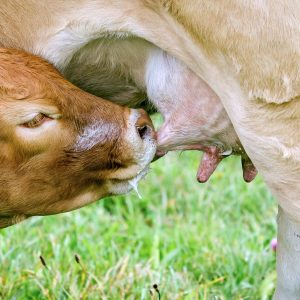 The reproductive cycle in cattle is 20â€“23 days long. Within that time, cattle are receptive to breeding only during a 12- to 18-hour window known as estrus.

The narrow window makes it challenging to use advanced reproductive technologies (ART), such as artificial insemination and embryo transfer, as they must be performed at exactly the right time in the animal’s cycle to be successful.

Cattle farmers use ART to breed their cattle selectively to improve their herds’ genetics, selecting for traits that are desirable, such as muscling, feed efficiency, marbling, and milk production. Ultimately, this translates into higher-quality meat and dairy products.

It also reduces the products’ overall environmental impact. When the quality of cattle being raised improves, fewer cattle are needed to meet demand. For example, in the dairy industry, genetic improvements have already led to dramatically fewer cows producing more milk than ever before. 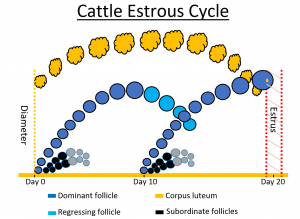 The estrous cycle of a cow: Cattle follow cycles of growth and regression of dominant follicles that contain the egg. A structure called a corpus luteum releases the hormone progesterone, which prevents ovulation. Traditionally, cattle can only breed at a 12- to 18-hour interval known as estrus, which occurs around Day 20 of the cycle, when the corpus luteum regresses.

To facilitate the use of ART, the cattle industry has developed ways to allow farmers to control when an animal comes into estrus. In the past, many estrus-control treatments relied on the hormone estradiol. However, growing demand for steroid-free meat and dairy has led to bans of or restrictions on estradiol use for cattle reproduction in places such as the European Union, United States, and Canada.

“Estradiol treatments are probably the most economical and effective,” Adams says, “And countries with access to them (such as Brazil) are leading in the application of ART. North America needs a similar tool â€“ something effective, affordable, and supported by consumers â€“ if producers are going to start making use of all the technologies available to them.”

According to Adams, letrozole may be the resource that the cattle industry has been searching for.

When researchers first began studying letrozole in cattle, they discovered it increases the lifespan of the dominant follicle containing the unfertilized egg. The longer-living follicle can mature and then be stimulated to ovulate and release the egg for fertilization. By this means, farmers can control and synchronize estrus and ovulation timing among the animals in the herd.

Delivered through a specialized device placed in the animal’s vagina, letrozole has been used to perform fixed-time artificial insemination (AI), a process in which frozen sperm from superior bulls is used to fertilize a cow’s egg. Farmers can also use the treatment to transfer embryos from superior female cows to surrogate cow-mothers to increase the number of offspring from the best cows in the herd. 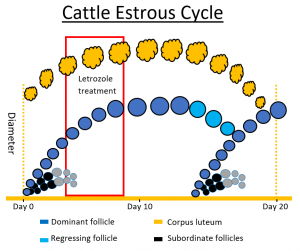 Letrozole treatment prolongs the lifespan of the dominant follicle, giving time for ovulation to be induced.

Last summer, University of Saskatchewan researchers conducted a large-scale field study at the university’s Livestock and Forage Centre of Excellence. Some 250 cows and heifers were bred, using either a letrozole-based program or a commercially available alternative, to compare conception rates and other markers of fertility, such as progesterone levels and corpus luteum size.

The trial, led by Ph.D. candidate Eric Zwiefelhofer, will provide insight into how effective letrozole treatment is in a real-world setting.

“Although there are many synchronization strategies for cattle, letrozole is advantageous because it decreases the number of handlings and duration of treatment compared to other products,” Zwiefelhofer says. “This makes synchronization with letrozole attractive to beef producers.”

Although still in the experimental stage, with many hurdles remaining before letrozole is approved for commercial use on farms, the results of this research may help change both the cattle industry and supermarkets. Combining a tool like letrozole with advanced reproductive technologies could improve herd genetics and health, increase farming and breeding efficiency, and augment farmers’ incomes. It could also mean consumers would be able to access more high-quality, steroid-free meat and dairy products.

As changing public perception and consumer desires continue to shape how food is produced, industries must adapt to stay current with their customers. Research on the benefits of letrozole seeks to bridge the gap between farmer needs and consumer demands, ultimately benefitting everyone.

Western College of Veterinary Medicine student Chris Jermey wrote this post as part of Science Borealis’s Summer 2019 Pitch & Polish, a mentorship program that pairs students with one of our experienced editors to produce a polished piece of science writing.